A rare red algae bloom off the coast of eastern Australia forced the closure of popular beaches near Sydney on Tuesday.

The thick bloom was caused by noctiluca scintillans, a dinoflagellate marine algae that is also called Sea Sparkle, because it exhibits bioluminescence.

Although the algae is naturally occurring, blooms such as these can be a hazard to swimmers. High levels of ammonia contained in the algae can cause rashes and eye irritation. Those risks caused beaches such as Bondi and Clovelly to close for the day.

A lifeguard at Bondi beach told the Australian Associated Press that the algae had a fishy smell.

Surfers first discovered the red tide at Bondi beach early Tuesday, according to News.com.au. The bloom broke up by evening, and the Bondi reopened. Clovelly, located further south, remained closed. Signs warning swimmers have been installed at affected beaches.

The New South Wales Office of Water has issued algal alerts along the state's coast and is investigating the cause of the blooms.

One theory is that an influx of colder, nutrient-rich water sparked the red tide, The Daily Mail notes.

In August, a lake in southern France turned red due to saline algae. A similar phenomenon affected Lake Retba in Senegal, turning it the color of a strawberry milkshake.

Algal blooms can be deadly to some marine life. In 2000, a massive red tide caused by gymnodinium breve algae spanned 300 miles of Texas coastline, CNN reported. The algae produce a toxin that paralyzes fish so they cannot breathe. 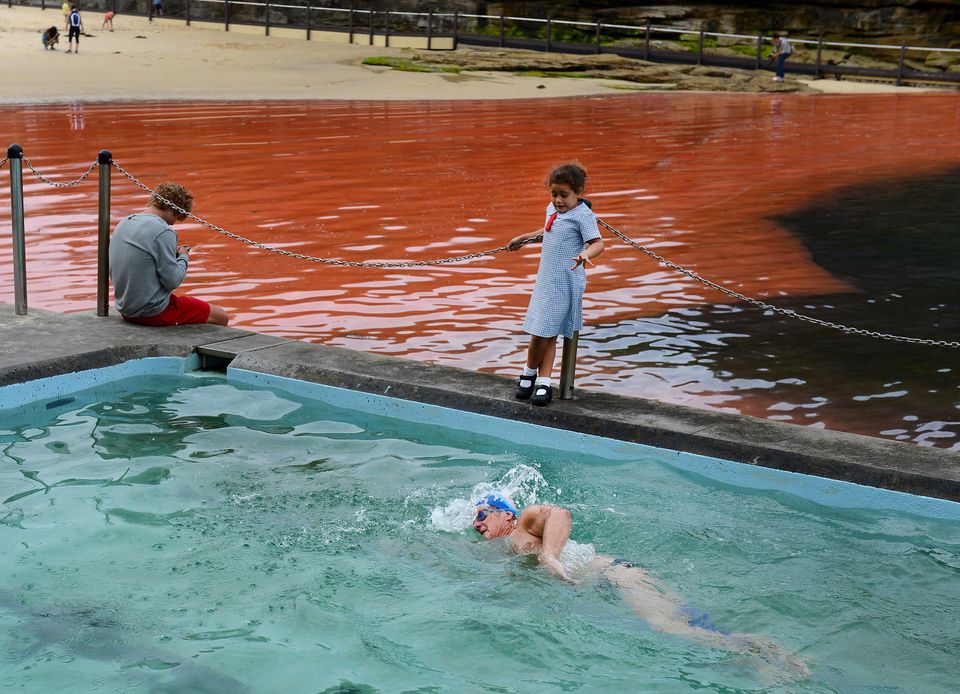 1 / 10
AUSTRALIA-NATURE-ALGAE
A swimmer swims in the safety of the pool as a red algae bloom discolours the water at Sydney's Clovelly Beach on November 27, 2012, which closed some beaches for swimming including Bondi Beach for a period of time. While the red algae, known as Noctiluca scintillans or sea sparkle, has no toxic effects, people are still advised to avoid swimming in areas with discoloured water because the algae, which can be high in ammonia, can cause skin irritation. AFP PHOTO/William WEST (Photo credit should read WILLIAM WEST/AFP/Getty Images)
Getty Images