The original tweet (shown below) was accidentally posted Tuesday night by Gloria Huang, a Red Cross social media specialist, and stayed up for about an hour. 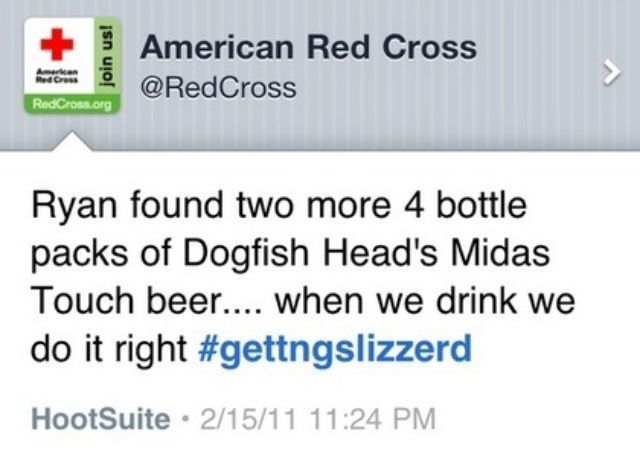 Huang later blamed the mistake -- over Twitter -- on her "inability to use Hootsuite."

The Red Cross' response and ensuing apologies were light-hearted, and assured followers that "the Red Cross [was] sober":

Dogfish Head brewery was particularly amused by the incident and took to their Twitter account to unleash a stream of remarks and retweets using the #gettngslizzerd hashtag, encouraging donations to the Red Cross and in kind consumption of Dogfish Head beer:

On their blog, the American Red Cross thanked their supporters for being understanding and using the accident to encourage donations:

In the meantime we found so many of you to be sympathetic and understanding. While we're a 130 year old humanitarian organization, we're also made of up human beings. Thanks for not only getting that but for turning our faux pas into something good.

You immediately embraced this mix-up and many of you have pledged donations to the Red Cross: