This morning I saw something on The Today Show that absolutely blew my brain. Apparently Starbucks has redesigned the look of the their annual holiday cup and people are up in arms over the change. Like, REALLY up in arms. As in folks are so furious that it's become national news.

I guess these stiffs are angry because they feel this year's cup doesn't accurately represent the holiday season. Gone are the snowflakes, snowmen, and mistletoe from years past and in their place is a simple red cup with a green Starbucks logo. As a result, Starbucks now stands accused of waging a war on Christmas.

Are you people for real?

We've got ISIS planting on bombs on planes, children being sold into sexual slavery, millions of Syrian refugees wondering where their next meal will come from and you're screaming about a cup?

How does this even BEGIN to compare to the real problems we face? Like the single mother who struggles to put food on her table? Or the grief-stricken father who's losing his son to cancer?

It's only because your life is so blessed and carefree that you even have the luxury of getting your Rudolph the Reindeer knickers in a twist over something so petty. So Starbucks redesigned their cup with a minimalist theme. So what? It's not a war on Christmas, an assault on your belief system or an attack on traditional values. It's a cup.

So here's a thought for you...

Instead of trying to change the cup, be thankful you can afford the cup. Trust me, my friend...the fact that you're even standing in line at a Starbucks means your life is pretty damn good. So focus on that instead. Life is way too short to get your panties in a wad over something so petty.

Now, won't you come join me for a Starbucks coffee with a side of holiday cheer? I certainly hope that you do. 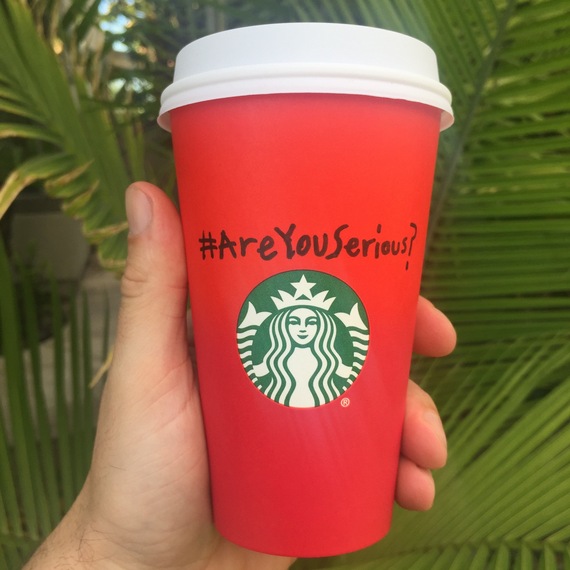