It seemed like most people were changing their Facebook profile pictures to the Human Rights Campaign's symbol for equality -- that red equal sign -- this week as the U.S. Supreme Court heard arguments in two cases concerning same-sex marriage. Turns out, it didn't just seem like most people were doing it -- hard data backs up what you saw in your Facebook feed. 2.7 million more people changed their profile pictures on Tuesday, March 26 compared to the previous Tuesday, a trove of charts published by Facebook on Friday reveal.

A look at how many people changed their profile pictures throughout the week.

Across the country, Facebook users changed their profile pictures. The chart above shows the rhythm of profile pic changes day after day, with a clear spike on March 26. Facebook didn't analyze exactly what they changed their pictures to, but we can safely assume that the red equal sign was driving the bump. On Tuesday morning, the HRC posted the symbol on its Facebook page and encouraged those in support of same-sex marriage to use it as their profile picture while the Supreme Court discussed Prop 8. 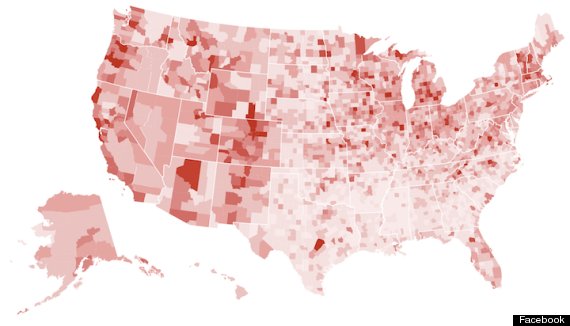 This map shows where people who changed their profile pictures are located.

The well-known geographic divides are apparently: same-sex marriage gets more support in the more liberal Northeast and West, less in the South. Additionally, Facebook found that 30-year-olds were the most likely to change their profile picture, with around 3.5 percent doing so. The data also showed that, unsurprisingly, those living in college towns were the most likely to change their profile pictures. Sure, it's great that people feel comfortable to publicly show their support for such an important issue, but does changing your profile picture really make a difference? Maybe.

Melanie Tannenbaum of The Scientific American argues that while changing your profile pictures to show your support for same-sex marriage certainly won't have an impact on legislation, it could affect your Facebook friends. In her article on the subject, Tannenbaum explains that people can be influenced by what they perceive to be social norms. If someone sees that all of his friends are pro same-sex marriage, he may feel that such an opinion is the social norm and be more likely to adopt it himself.

As lovely as the idea of creating social change via social media is, and as exciting as Facebook's statistics are, it is also widely known that intolerance is often deeply rooted in one's upbringing. But equal sign or no equal sign, consensus in favor of gay marriage is rapidly forming in America.