Yes, Tuesday's commute was definitely more exciting than most. You may have heard about the Red Line train that caught fire Tuesday evening at Silver Spring. That was my train. Apparently the Metro gods thought we all needed a little excitement in our commutes that evening. And that's exactly what we got.

The ride started out pretty normally. I got the train at Dupont Circle, boarding Breda 3147 -- the lead car. I was doing Facebook, and noticed this man who looked like a very serious businessman in a suit with his tablet computer and all that... 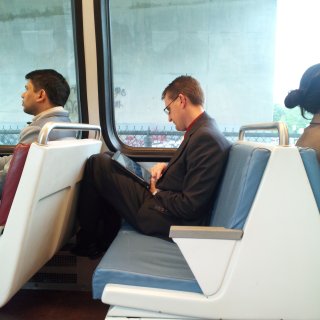 ...and then I noticed that he was actually playing Angry Birds on his tablet.

When we got to Takoma, the train operator powered the train down and left the cab. My first thought was that he was being relieved to use the restroom, and that a supervisor would be taking over the train shortly. But no supervisor arrived, and I was starting to get a little bit concerned about when we were going to leave Takoma station.

So I tweeted to Metro:

I figured that's all it was. I figured it was just a simple case where the operator was supposed to be relieved, but the supervisor hadn't gotten there for whatever reason. Then I heard our operator announce on the PA (from another cab) that the train was going to be offloaded. Well, fun. And so off to the platform we went: 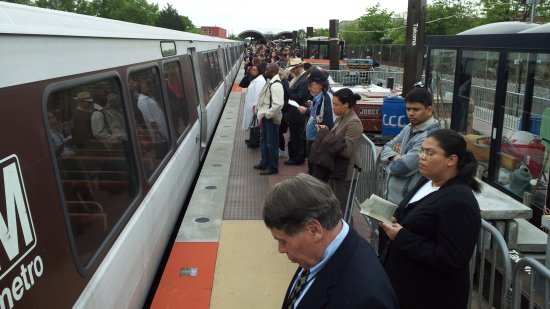 There was a supervisor at the end of the platform near where I was standing, and so I asked her about what caused the offload. Turns out that there had been reports of smoke on the train. Fair enough. Once the train was offloaded, the train proceeded down the tracks, out of service, in the normal direction of travel. This is the usual case when a train goes out of service. The idea is to take it out of service and then get it off of the line in the most expedient way possible. The next train was directly behind the train that we were offloaded from, and so it looked like things would have a happy ending. The next train arrived, everyone got on, I got a seat, and all was well, at least as far as I could tell. My tweet said it all:

I saw no reason to think that this would be any more than a minor offloading. The doors closed, and we continued. Our train stopped short of Silver Spring station. I looked up from my phone to see where we had stopped, and saw heavy smoke up ahead, coming from the train that many of us had just been offloaded from just five minutes earlier. My first reaction was to say, out loud, "Oh, S--!" and then get up from my seat to get a better look. I took a photo: 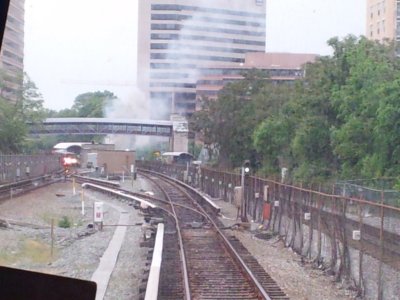 Yes, that is heavy smoke coming from the train that we had just been on a few minutes earlier. That, by the way, is also the moment that one realizes that one will not be making one's bus connection to get home. That connection to the 51 goes right out the window right there. Not happening. Since I was right up next to the cab, I was able to overhear what they were saying on the radio, and our train operator quickly got his orders: reverse your train and go back to Takoma station. So that's what we did. The train operator walked through the train to the other end, and soon we were headed back to Takoma station, where our train went out of service. The train went back in service on the same track a few minutes later, but as a Shady Grove train. It was quickly becoming apparent that they weren't single tracking around the incident, but rather, they were suspending all train service through Silver Spring. A quick check of the Twitter turned up this tweet from Metro:

That was all I needed to hear. Time to leave the platform and find a shuttle bus. By the way, it's worth noting that most likely due to platform renovations currently going on at Takoma, many people were unable to hear any station announcements being made over the PA system, either from Central Control or from the kiosk. I couldn't hear any announcements until I was in the mezzanine. But since I had information, I took the bull by the horns and led people out. I held up my phone (it helps to show how you got your information), and as I was walking down the platform, periodically said in a loud voice for everyone to hear that shuttle buses were going to be run between Takoma and Forest Glen.

Outside, there was a pretty sizable crowd. As is normally the case with shuttle bus service, it takes a while to get them in place. Thus we had to wait. My strategy in this case was that I didn't particularly care if it was a shuttle bus or not. My plan was to get on any bus going towards Silver Spring and then transfer to a Y bus from there to get home. Seemed reasonable enough. The first bus to come in was an Orion V from Ride On. This was a regular bus - not the shuttle buses that were being run (those would be Metrobuses). I was close to the bus and tried to board, along with another regular 51 rider, but we weren't close enough. After all, a 40-foot Orion V doesn't have nearly the capacity as a 75-foot railcar, and so we couldn't get on. Drat.

However, when the next bus arrived, I quickly realized that I wasn't going to get on any bus any time soon. A whole bunch of people rushed the bus: 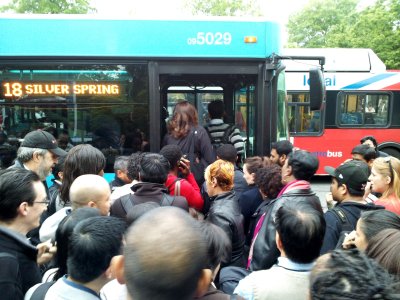 Seriously, everyone rushed towards the door at once, trying to get on. And this wasn't even a full-size bus. This was a 30-foot "baby Gillig". The driver had to stop everyone and get them to board in a more orderly manner. What you see in the picture is the first people boarding the bus after the driver started letting people on.

It quickly became clear that these people needed to get home far more urgently than I did. This led me towards looking into how feasible it would be to walk to Silver Spring. I looked it up on my phone, and as it turned out, it wasn't that bad of a walk. It was a 1.7 mile walk from Takoma station to Silver Spring station. That's the same distance that I have walked many times before between Glenmont and my house. I could handle this. And considering that I had come to the realization that I wouldn't be able to make it to the pool in time, walking would be a reasonable enough substitute for the lost pool workout. A few other folks agreed to come along, and we were off!

And by the way: smartphones are awesome. My phone provided step-by-step, turn-by-turn directions for walking. Before smartphones, I would have probably waited ages to eventually board a shuttle bus, which is what happened to me in 2009 after the big Red Line collision. But with the smartphone, I just looked up where I needed to go, and the phone held my hand (so to speak) the entire way. I think I probably saved myself a lot of time that way. Plus exercise.

On the way to Silver Spring, I also spoke on the phone with Liz Essley of the Washington Examiner. It quickly got around on social media circles that I had been on the fire train, and so she wanted to do a quick interview with me. That went into an article about the incident.

Arriving at Silver Spring, I caught the Y8, and all was well in my world again. It would be a longer than usual bus ride home, but sitting down in the seat on that Y8 bus meant that I was on a vehicle that was going to get me home. And based on a tweet that I made as I walked into the house, I got home at 8:23, which is slightly less than two hours later than I usually get home. But it was okay. I still got something of a workout, I got to be resourceful and take a leadership role in a crisis (perhaps I can now add "crowd management" to my resume?), and I also made a new friend.

And then Metro performed well enough during the whole situation from what I can tell. I will not fault them for not having buses waiting in the wings for shuttle service like they do during weekend shutdowns. By their nature, emergency bustitutions are not planned, and so the buses and their drivers are being employed in other ways doing normal service. And it takes time to get buses into place for an emergency shuttle service during rush hour, especially if they're called out of revenue service while they still have passengers on board. Thus they have to complete their routes and then do the shuttle. I refuse to fault Metro for that. If Metro could make fifty buses magically appear to start shuttle service and get people moving again, trust me, they would. But as much as we wish it were otherwise, saying "hocus pocus alimagocus" will not make a Metrobus suddenly materialize. Likewise, my hat is off to Metro for offloading my train at the first sign that something was wrong, well before the fire got big (you could see no smoke in the photo above). Yes, my commute was two hours longer than usual. But no one was injured during the entire incident. Better to be slightly annoyed about being late getting home than to be injured while trying to escape a burning railcar, or worse. The only thing I will fault Metro for is the inability to hear the station announcements from the platform at Takoma. That needs to be fixed, and hopefully the completion of the platform renovation at Takoma will rectify that soon.

Also: Metro later verified that the fire car was 1091, a 1000-Series car. The cause was determined to be a connector shoe, which is part of the way that the train receives power from the third rail. No idea how extensive the damage was to 1091, but the exterior was noticeably blackened in photos posted online.

Cross-posted from The Schumin Web