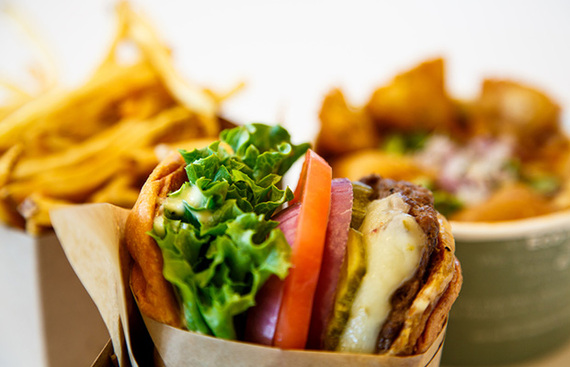 By Tracy Saelinger for Life by Daily Burn

When the World Health Organization issued a report this past October citing that processed meats are carcinogenic from the International Agency for Research on Cancer, news outlets and social media sites lit up with conversation. After all, this was a big deal: Beloved foods like bacon, ballpark dogs or your breakfast sausage were deemed cancer-causing, and eating other red meats (hi, filet mignon) could "probably" raise the risk for colorectal (aka colon) cancer as well, according to the report.

But does the report, compiled by a 22-person team of public health and cancer experts, mean that deli meats and T-bones should be eliminated from our diets completely? After all, if they're classified as a carcinogens, do they equate to something as poisonous as tobacco? Not quite, according to the IARC. While processed meats and tobacco smoking are both classified as carcinogens, they are not (we repeat, not) equally dangerous.

What the Experts Have to Say

"For an individual, the risk of developing colorectal cancer because of their consumption of processed meat remains small, but this risk increases with the amount of meat consumed," Dr. Kurt Straif, head of the IARC Monographs Program, said in a recent statement.

Furthermore, it's not like eating processed and red meat is the same as smoking a pack of cigarettes. "The science relating to the carcinogenic properties of processed meat is just as strong as the science relating to smoking, but the overall risk from smoking is higher," explains Catherine Burns, a nutritional therapist who has written extensively on the topic as managing director of the Bermuda-based Natural Nutrition, a consulting firm. In fact, The New York Times notes the difference between meat and tobacco's carcinogenic affects are at least 20-fold.

However, it's important to note that fresh red meat doesn't act in a malignant manner similar to the way deli stuff does. Processing meat -- think salting, curing, smoking or fermenting it to prolong shelf life -- triggers the formation of chemicals linked to cancer, Burns explains, which then damage the healthy cells in your colon. If you're still craving deli meat, you can look for brands like Applegate, she says, which only use antibiotic-free meats and treat them with fewer preservatives, like nitrites and nitrates.

Interestingly, cooking any quality of red meat at super-high temperatures (like on a gas grill, for example) also triggers the production of carcinogens including heterocyclic amines (HCAs) and polycyclic aromatic hydrocarbons (PAHs), says Burns. These compounds can potentially damage DNA, thus increasing cancer risk, according to the American Institute for Cancer Research.

Yet, there's one easy fix way to possibly help reduce the risk: Simply marinate your meat. (Try this recipe!) Marinating meats for at least 30 minutes, according to Burns, will reduce the production of those dangerous HCAs. The particular combo of olive oil and lemon juice seems to be particularly effective, according to the AICR, though scientists are still investigating why. Another protective marinade you may want to try? Beer, according to a study in the American Chemical Society's Journal of Agricultural and Food Chemistry, which helps fend off the formation of damaging free-radical compounds.

How Much Red and Processed Meat You Can Really Eat?

Well, the jury's still out. "I don't think there is a consensus on how much meat now should be eaten," says Burns. Furthermore, the World Health Organization did not set any kind of consumption guidelines when the report was released. However, for Burns' own family, she says she limits serving processed meats (like bacon and deli ham) to once a week; and same goes for red meats like carefully sourced grass-fed steak or ground beef. "And that is within the context of a diet packed full of vegetables and fruit," she adds, noting this is her opinion based on the existing research.

"Being a 'meat and potatoes' kind of person is a big part of the problem -- low antioxidant sides do not offer us protection. We need to be a 'meat and spinach' kind or a 'red meat and red wine' kind of gal," says Robinson, since both of those "sides" are antioxidant rich. "The antioxidants in the food will prevent heme iron [a type of iron found in animal-based proteins] from irritating the colon, which can set up a predisposition for colon cancer," she adds.

When it comes to red meat consumption, what's most important is to keep everything in perspective. "Most scientists agree that it is unrealistic to isolate a single food as a cause of cancer from a complex dietary pattern further confounded by lifestyle and environmental factors," Darren Williams, a spokesperson for the National Cattlemen's Beef Association, told Daily Burn. So don't worry about that morning bacon -- just save it for special occasions.

More from Life by Daily Burn:
What 25 Grams of Protein Looks Like [INFOGRAPHIC]
The One Thing That Helped Me Lose Weight
Can Vitamin C Really Help You Fight a Cold?