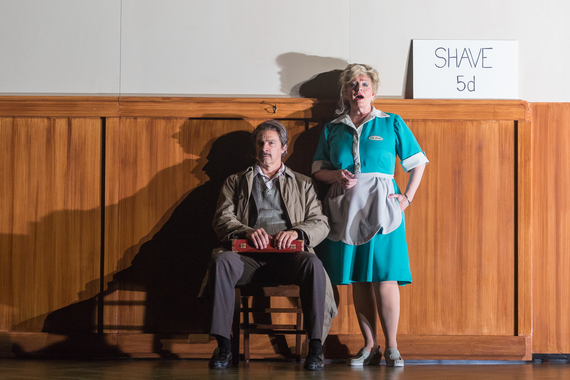 Read Part I of the Glimmerglass Weekend reviews here.

With its commitment to producing an American musical in rep with three traditional operas, the Glimmerglass Festival next presented Stephen Sondheim's macabre Sweeney Todd: The Demon Barber of Fleet Street. Premiered in 1979 with a cast headed by Len Cariou and Angela Lansbury, Sweeney, the story of a formerly-exiled barber with a vendetta and thirst for blood (and hunger for meat pies), is one of the musicals most commonly produced by opera companies and justifiably famous. 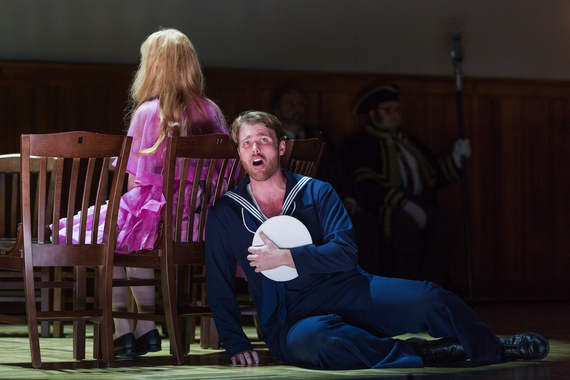 The blade-wielding barber was sung with great commitment by the veteran bass-baritone Greer Grimsley. The role of Sweeney is long, demanding, and incredibly complex, possibly too complex for Grimsley who, despite a dark, resonant bass-baritone, seldom deviated from a suave-yet-intense, anguished demeanor and delivery. His real-life wife, mezzo-soprano Luretta Bybee, played his business partner-cum-paramour Mrs. Lovett more like a sassy diner waitress (especially as costumed in this production by Terese Wadden, whose other costumes were equally dowdy and unflattering) than Lansbury's iconic, twitchy-yet-focused performance. She negotiated the character with relative ease (Mrs. Lovett doesn't exactly require a pure, fresh voice or clean legato line - Bybee had neither), but fatigued as the evening progressed. Harry Greenleaf gave the evening's only truly polished performance as Anthony, the sailor in love with Sweeney's abducted daughter, Johanna. His assured, soft-grained, ringing baritone poured out a heroic reading of "Johanna" which won the night's biggest applause. His Johanna, here costumed like a Barbie cake-topper, was the dreamy-eyed Emily Pogorelc whose voice seemed a shade too rich for the warbling ingénue. Peter Volpe lent a leathery, mellow voice and the requisite pomposity and predatoriness to the part of Judge Turpin and he was complemented by the slimy Beadle of Bille Bruley who had ringing high notes to spare.

Todd's first victim is the faux-Italian barber Adolfo Pirelli, here sung and acted to the hilt with piercing, if not effortless, high C's and ease with accents by Christopher Bozeka. His lackey, Tobias, who is eventually employed and them imprisoned by Mrs. Lovett, was given an earnest portrayal by Nicholas Nestorak, though there was some shakiness in his "Not While I'm Around." Patricia Schuman rounded out the lumpy cast as an overly-vulgar Beggar Woman.With a production that robbed this dark comedy of many laughs and the all-too-smooth sounds coming from the pit (Conductor John DeMain seemed intent on highlighting absolutely every snippet of melody in Sondheim's often jagged and murky score), this was an operatic presentation of a musical and though not wholly unenjoyable, just didn't serve the piece.

Christopher Alden is known for pushing the envelope with his often-reinvented stagings of classic and obscure pieces (If only they had given him "Magpie"!), but this seemingly-midcentury Sweeney, which unfolded within Andrew Holland's efficient sets, eschewed the story's supernatural element and left behind a sarcastic, sometimes-awkward husk that did nothing to alleviate or capitalize on some of the smugness that permeates most Sondheim shows. 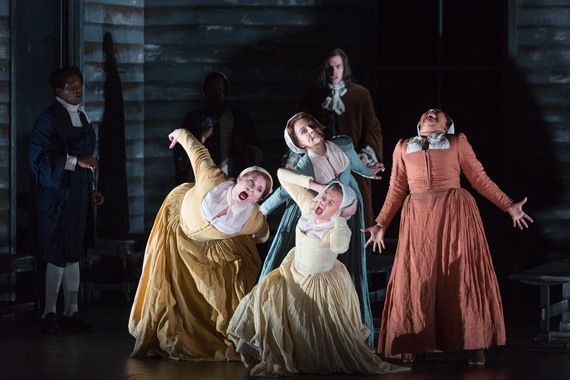 A show decidedly void of snugness, though, would by Arthur Miller's scourging The Crucible, which was seen in its operatic adaptation by Robert Ward the following day. Miller's play, a fiery allegory of McCarthyism by way of the Salem Witch Trials, is a massive, multi-faceted piece. The opera pares it down, sometimes omitting significant details (Elizabeth Proctor's pregnancy isn't acknowledged in Ward's adaptation). Ward's adaptation is a capable work - the music is atmospheric and ensembles effectively build to evoke the frenzy of finger-pointing that propels the opera; and though what remains is mostly cohesive and engrossing, it fails to yield any new revelations about the oft-discussed staple of American drama. Francesca Zambello's aimless production, though, dampened what could have been a wholly compelling presentation. Everyone in Crucible has a motive; love, revenge, fear, etc.. Here, the characters moved without purpose and scenes best left to the imagination for drama's sake (say, the girls' alleged dancing in the forest), were played out onstage and robbed of their mystery and ambiguity. Fortunately, conductor Nicole Paiement kept a lithe, motile touch over Ward's hypnotic score and coaxed gorgeous, enveloping sound from the Glimmerglass Festival Orchestra.

Vocally, the afternoon went quite smoothly, starting with Ariana Wehr's chesty soprano and arresting high notes as Abigail Williams. Elizabeth Proctor, Abigail's "rival" for the love of the farmer John Proctor, was sung with ease and crispness by Jamie Barton who also showed off promising acting chops. However, it was Brian Mulligan who gave a tireless, tour-de-force performance of the demanding role of John Proctor. Solid across the role's large tessitura, he sang with force, smooth phrasing, and unerring drama. Curiously, it took Jay Hunter Morris, a familiar face on the stage of the Alice Busch Opera Theater, some time to warm up as Judge Danforth; he initially competed with the orchestra for volume and struggled to find a firm musical line in Ward's flowing score. He soon settled in to his villainous character, though, and milked it for all it was worth. John Pittsinger was a growling Reverend Hale. Among the smaller players, Mëroe Khalia Adeeb sang the wordless vocal line of Sarah good with gorgeous tone, Helena Brown was an earthy-voiced Rebecca Nurse, and Chaz'men Williams-Ali sang was a reedy-sounding Giles Corey.

Neil Patel's single-room set was a highly effective choice that highlighted the claustrophobia as well as the fear of nature's encroachment on the people of Salem. And though Jessica Jahn's period costumes were effective, they couldn't have been comfortable for the singers on sweltering days like the Sunday I was there. The Glimmerglass Festival Chorus delivered exactly the way they needed to when it came to scenes involving all of Salem. 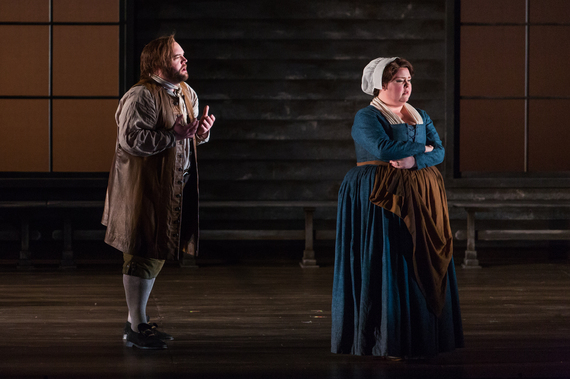 The jaunt up to Cooperstown can have the tendency to be a slog - the drive is lengthy, the restaurant and hotel scene is bleak, and activities apart from baseball or opera are few and far between. But at Glimmerglass, even when there are bumps in a performance, opera in the United States gets an extraordinary opportunity to exhale.

All photos by Karli Cadel