BOSTON (AP) — The Red Sox have now won three World Series in the past decade — but not since the days of Babe Ruth had Boston won a fall classic in its beloved Fenway Park.

The historic victory sent Boston fans spilling into the streets Wednesday night to celebrate Boston's 6-1 victory over the St. Louis Cardinals in Game 6. Amid the cheers and high-fives, the white lights of Boston's Prudential Tower read "GO SOX."

"Words cannot describe how I feel," said Red Sox fan Sam D'Arrigo. "This is what being a Boston fan is all about."

The win capped an emotional season for the Red Sox, one heavy with the reminder of the Boston Marathon bombings in April, which left three people dead and more than 260 wounded. Players wore "Boston Strong" logos on their left sleeves and a giant "B Strong" logo was mowed into Fenway's outfield.

"We needed this," said Mark Porcaro of Boston. "They were an easy team to get behind because they stood up for us when we needed them most."

An excited Boston Mayor Tom Menino tweeted: "Get the ducks ready, we're having a parade." He was referring to the duck boat parades the city had had during previous sports celebrations.

Get the ducks ready, we're having a parade! Please, be responsible, and let's celebrate! Thank you @RedSox. #bostonstrong

After the game, police set up barriers to funnel the crowds away from Fenway Park and mounted police and officers on bicycles patrolled the area. Some fans were obviously intoxicated. A few young men climbed a pole holding a traffic light.

People climb up to the top of traffic lights outside of Fenway (Jessica Rinaldi for The Boston Globe) pic.twitter.com/VSeNXlTyFH

A large group gathered near the marathon finish line, chanting and blocking traffic until police arrived.

Crowds gather at the Marathon finish line after the Red Sox win the 2013 World Series pic.twitter.com/V5qKLhBhZA

Police said on Twitter that they'd arrested nine people for unruly behavior. Throughout the night, the department had tweeted cautionary messages, encouraging fans to "Celebrate with pride" and "Celebrate responsibly." Police later thanked the "tens of thousands" of Red Sox fans who took their warnings seriously.

In New Hampshire, celebrations turned destructive at several college campuses. In the largest incident, University of New Hampshire officials say police used pepper spray and pepper balls to break up a crowd of several hundred students that had gathered at the Durham campus. Officials said some of the students threw glass bottles at officers.

Boston has hosted several celebrations over the last decade as the Celtics, Patriots, Bruins and Red Sox have all won titles since 2004, but some of the post-championship partying has caused problems. In 2004, a 21-year-old college student was killed by a pepper pellet fired by Boston police during crowd-control efforts following the Red Sox win in the American League Championship Series. In 2008, a 22-year-old man died after police took him into custody during street celebrations of the Celtics' title.

In St. Louis, fans were disappointed that the Cardinals lost.

Ed Moreland watched the game while cleaning offices at a downtown bank building. "We had a good team. We fought for it," he said. "Boston was just a bit stronger."

At The Dubliner, an Irish pub near the St. Louis Convention Center, bartender David Fitzgibbons suggested that collective excitement in the city dissipated after a 3-1 loss in Game 5 that left the Cardinals needing a two-game sweep in Boston to prevail.

"I don't think people's expectations were that high," he said.

Wednesday's game was a triumphant end to a hectic day in Boston — hours before the game, President Barack Obama delivered a talk at Boston's historic Faneuil Hall on his embattled heath care reform.

With the World Series and a presidential visit, police were on high alert. The marathon bombing prompted the deployment of extra dogs and undercover officers.

For the citizens of Red Sox Nation, the extra security, the traffic and the closed streets were a small price to pay for baseball glory.

"Since 1918, no one has experienced this," said Russ Stappen of Rockland, Mass., who shelled out several hundred dollars for his ticket. "There's nowhere else I'd rather be." 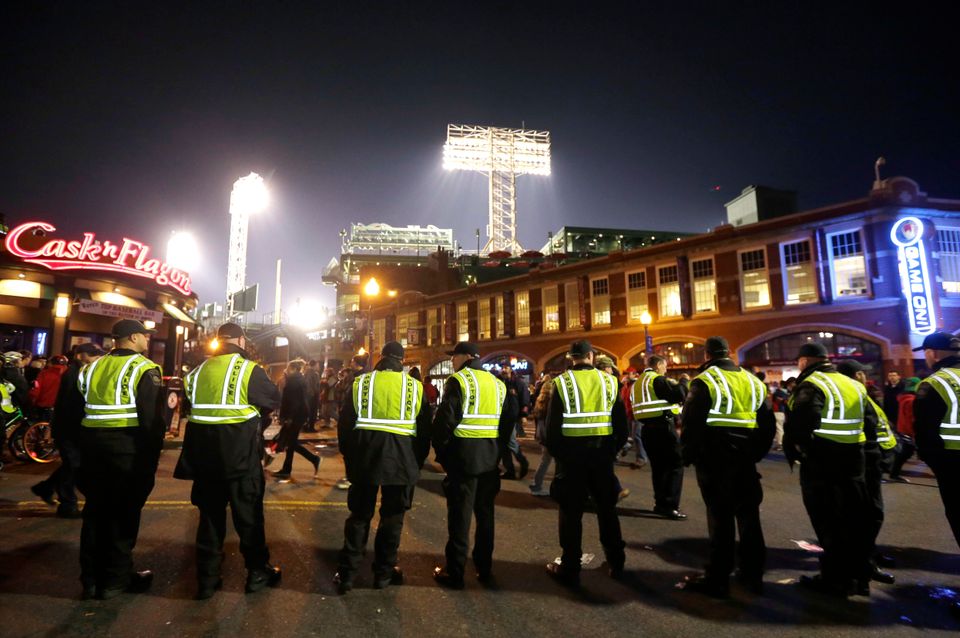