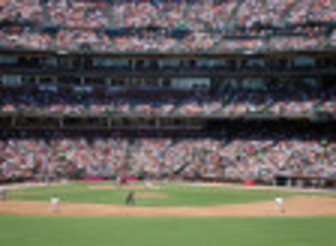 After winning the World Series last year, the Red Sox crashed and burned back into last place in the American League east division this year. But that's okay, with three World Series titles in the last ten years, I'll give them a pass. And in honor of the playoffs starting, albeit without the Red Sox, I can fondly recall when everything changed in 2004.

I've been a die-hard Red Sox fan since I jumped on the Fred Lynn-Jim Rice bandwagon in 1975. In 1976 I moved to Boston to attend Boston University. After attaining a bachelor's degree, I stayed on, marrying in 1990, and remaining in the greater Boston area until 1993, when my wife and I moved to Schenectady, NY, my home town. We had season tickets during the last three years I lived in Boston. Now, along with my wife and our daughter and son, I still go back at least once a year for games. When the Sox make the playoffs, I attend as many of the games as I can.

In 2004, I had tickets to games 3 and 4 of the League Championship Series vs the Yankees. The Red Sox lost the first two games at Yankee stadium. Game three was tied 6-6, and then the Yankees scored 11 unanswered runs. I sat in Fenway Park with 30,000+ other shell-shocked fans watching the Yankees pound out hit after hit. It was one of the most depressing times ever for a Red Sox fan. The Yankees had a commanding 3-0 lead; breaking the Curse of the Bambino was going to have to wait another year.

On my way out of the park, I was about to toss my ticket stub on the ground. Just before I let go of it, I thought "I'll hold onto this for now...just in case." As I put it back in my pocket, I thought "Just in case of what? A miracle?" Not only were the Red Sox not going to win the series, but I didn't even want to go to game 4. It was just too depressing and even if they won game four, it wouldn't matter.

The next day I decided, what the heck, I'd go to the game. It turned out to be a pretty good game, but when it got to the bottom of the ninth the Yankees were up 4-3. The great Mariano Rivera was in to complete the sweep for the Yankees. Thanks to a steal by pinch-runner Dave Roberts and a subsequent single by Bill Mueller, the game went to extra innings. In the bottom of the 12th, David Ortiz crushed a two-run, walk-off homer that sent the crowd into a frenzy.

It had turned out to be a classic. An amazing game. I was very glad I'd decided to go. None the less, it didn't change the fact that the Sox still had no chance whatsoever to win the series. No team had ever come back from a 3-0 deficit and with two of the three remaining games in New York, the Red Sox weren't about to change that.

Except a miracle occurred. The Red Sox won the next three games. And then they won the next four games. On October 27, 2004, my daughter's 9th birthday, the Curse of the Bambino was finally broken. The Red Sox had won their first World Series title since 1918. Their 86-year drought was over. And my 29-year drought as a fan was over.