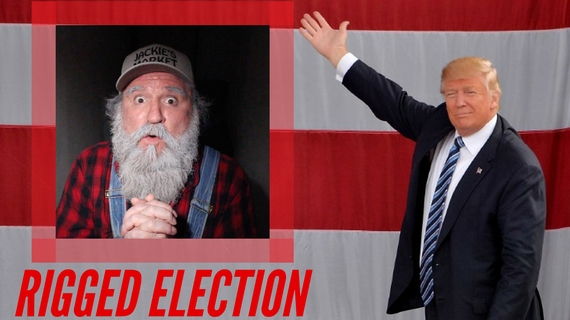 FIRST: Join Jackie and Dunlap for the tale of Crud's Funeral, an update on the Creepy Jackies terrorizing Tennessee, plus all the murders of all the people who look like Jackie Broyles nowadays. And how is Church Accountant Dunlap's Ocean's 11 plan to heist the Mount Shepherd Pasture Church on Dead Relatives Day shaping up?

Sponsors: Murfreesboro Police Department and I don't think Dunlap said one but maybe it's Marker and Hosh Funeral Home, not as good as Quiet Funeral Home but "We've Handled Some of the Wilder Ones."

Podcasting from a bunker underneath Jackie's Market in Murfreesboro, Tennessee, Jackie Broyles and Dunlap yell about Donald Trump and Hillary Clinton, liberals and conservatives, Democrats and Republicans, Never-Trumps and Bernie bros, Deplorables and RINOs, fake local sponsors, real national politics, pop culture and the 2016 presidential election. If you like sophisticated satire, nuanced political humor, and redneck shitkicking hillbilly country comedy Hee-Haw moonshine outhouse Blue Collar donkey cartoon face, this is the podcast for you. I mean "y'all."