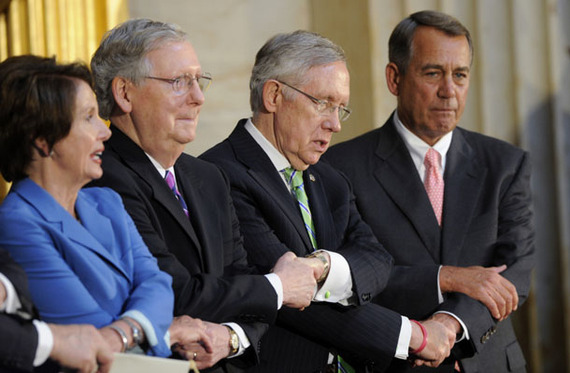 If lawmakers paid more attention to their constituents than their campaign contributors, there would be more Kumbaya moments like this one on Capitol Hill.

Congress is more deeply divided today than it has been in the last two decades on a wide range of issues, including global warming. In the Senate, for example, Oklahoma Republican James Inhofe routinely fulminates that it's a hoax, while Rhode Island Democrat Sheldon Whitehouse understands the science and is leading the charge for a carbon tax.

Conventional wisdom says the schism between Inhofe and Whitehouse shouldn't come as a shocker. After all, Oklahoma is a red (i.e. conservative) state, and Rhode Island is blue (i.e. liberal), and elected officials represent the views of their constituents, right?

Despite the polarization on Capitol Hill, Americans in red and blue states agree on quite a lot -- including the need to address global warming -- according to a recently released study sponsored by Voice of the People, a new nonpartisan organization that wants public opinion to play a bigger role in the policymaking process.

The study, conducted by the Program for Public Consultation (PPC) -- a joint project of the Center on Policy Attitudes and the University of Maryland's School of Public Policy -- analyzed answers to 388 questions from two dozen opinion surveys taken between 2008 and 2013 on a variety of hot-button policy issues. Besides climate change, they included health care, immigration, and U.S. forces in the Middle East. PPC found that a majority or plurality of residents in red congressional districts and states disagreed with their blue district and state counterparts on only 4 percent of the questions, and those mainly pertained to abortion, gun control and gay rights. In two-thirds of the questions, there were no statistically significant differences in their answers.

"Clearly the American people are not the source of polarization and gridlock in Congress," said Steven Kull, PPC's director and Voice of the People's founder and president. "What is the source of this polarization and gridlock? Well, there are a lot of forces that try to influence Congress. You could call it the 'influence industry.' There are lobbyists, there are corporations, there are special interest groups, all trying to influence Congress, pulling Congress in different directions."

The poll results also indicate that Americans are prepared to make modest sacrifices to avoid the worst consequences of global warming, which ultimately would cost considerably more. For example, roughly 60 percent of blue and red district respondents are willing to pay as much as $19.50 a month more for energy and other products. And slim majorities -- 54.7 in blue districts and 51.5 percent in red districts -- say "climate change should be given priority even if it causes slower economic growth and loss of jobs."

Survey answers to questions on vehicle fuel economy and carbon emissions suggest that Americans of all political stripes approve of recent Obama administration initiatives, including the new proposed rule to reduce power plant carbon emissions. More than 80 percent of respondents in both blue and red districts "favor [the] federal government requiring automakers to build cars that use less gas." And more than 70 percent "favor [the] federal government lowering the amount of greenhouse gases power plants are allowed to emit."

Furthermore, majorities in both blue and red districts support international efforts. At least 75 percent agree that "limiting climate change is an important goal for U.S. foreign policy," and more than 60 percent say the United States "should participate in a climate change treaty." Finally, majorities in both districts -- 58 percent in blue districts and 54.2 percent in red -- agree that "if less developed countries agree to limit their greenhouse gases, the United States and other developed countries should provide them with substantial aid to help them do so."

Money Talks (and the Koch Brothers Have a Lot of It)

So if blue and red districts largely agree that the government should cut carbon pollution, why are federal lawmakers sitting on their hands?

As Kull pointed out, too often members of Congress seem more concerned about protecting special interests than the public interest. In this case, the special interests are the fossil fuel industries -- coal, oil and natural gas -- and electric utilities, which have collectively lavished more than $324 million on federal candidates, PACs, parties and outside groups over the last 10 years, according to data compiled by the nonpartisan Center for Responsive Politics, the source for all of the campaign and lobbying stats below.

If nothing else, those contributions buy access, and since 2004, utilities and fossil fuel industries have spent more than $2.6 billion to lobby Capitol Hill. Over that time, Congress has beaten back attempts to put an end to the nearly $5 billion in annual tax breaks and subsidies afforded the oil and gas industry -- and failed to take any substantive action on climate change.

Americans for Prosperity's "No Climate Tax Pledge" campaign illustrates how corporate influence can manifest itself. Four years ago, Charles and David Koch's flagship tea party group began lobbying members of Congress to sign a pledge to "oppose any legislation relating to climate change that includes a net increase in government revenue." Although the pledge technically leaves the door open for a revenue-neutral bill, it is highly unlikely that the 137 representatives and 25 senators who have signed it -- especially the ones who deny the reality of manmade global warming -- would support any climate-related measures.

So who has these legislators' ears?

To keep this analysis manageable, let's confine it to the Senate. Since 2009, utilities and fossil fuel companies have contributed more than $3.8 million to the 25 senators who have signed the pledge. The top two recipients, Texas' Ted Cruz and Oklahoma's Inhofe, pulled in more than $400,000 and $393,000 respectively.

The biggest donation came from the Koch brothers' coal, oil and gas conglomerate, Koch Industries, which contributed $725,900 to 23 of the 25 senators who signed the pledge. Other significant funding came from the Murray Energy coal company, which doled out $358,650 to 17 signatories; the Southern Co. electric utility, which gave $198,600; Chevron, which contributed $147,750; and ExxonMobil, which provided $139,550.

The Club for Growth, a conservative political action group that disputes mainstream climate science, kicked in another $2.3 million over the same time period to six of the signatories. Nearly 90 percent of the club's contributions went to three senators: Jeff Flake from Arizona, who raked in more than $1 million, and tea party newbies Cruz and Marco Rubio of Florida, who received $705,000 and $363,000 respectively.

As it turns out, the Club for Growth also has a Koch connection. Between 2008 and 2012, its largest donor was the Center to Protect Patient Rights, a secretive political action group linked to the billionaire brothers. Over that time period, CPPR gave the club $1.15 million -- 20 times more than the group's second-highest donor -- and funneled $15.8 million to Americans for Prosperity.

Sen. Rubio, who was elected in 2010 after eight years in the Florida Legislature, provides a shining example of how corporate influence can sway a politician.

In 2008, as speaker of the Florida House of Representatives, Rubio was a lead sponsor of an omnibus energy bill directing state agencies to develop a cap and trade program for carbon emissions and a standard requiring electric utilities to increase their use of renewable energy. In March of that year, in an interview on the Florida Channel's weekly news show Florida Face to Face, he even voiced support for a carbon tax.

"When Rubio was speaker of the house, he was very committed to clean energy solutions," said Susan Glickman, the Florida director for the Southern Alliance for Clean Energy. "He clearly understood the threat climate change poses to Florida, and he saw the economic development and technological potential in addressing it."

After Rubio announced a run for the U.S. Senate in May 2009, however, he began to attract funding from major carbon polluters on top of the hundreds of thousands he got from the Club for Growth. ExxonMobil, Chevron, Koch Industries, Murray Energy, Southern Co. and four other energy companies gave him more than $180,000.

He also did an about-face on climate change.

Just a few weeks ago, ABC's This Week aired a lengthy interview with Rubio, who was visiting New Hampshire to explore the possibility of a presidential run. Correspondent Jonathan Karl asked the senator for his take on global warming. Rubio's response was right out of a fossil fuel industry talking points memo.

"I don't know of any era in world history where the climate has been stable," Rubio said. "Climate is always evolving and natural disasters have always existed."

Karl pressed him further. "But let me get this straight," he said. "You do not think that human activity -- the production of CO2 -- has caused warming to our planet?"

Rubio got it backward. According to the federal National Climate Assessment report issued just days before his appearance on the Sunday morning gabfest, it's unchecked global warming that would devastate the economy, especially in his own home state. The report, the third in a series produced by the U.S. Global Change Research Program, provided an overview of the likely consequences of global warming nationwide.

In South Florida, one of the most vulnerable regions in the country to rising sea levels, the consequences are already an everyday reality.

"We've been dealing with the effects of climate change for quite some time," said Broward County Mayor Kristin Jacobs, who attended an East Coast sea level rise conference the Union of Concerned Scientists convened in April 2013. The biggest issue for Jacobs is routine flooding from high tides and heavy rainfalls.

Broward, which includes Fort Lauderdale, joined with Miami-Dade, Monroe and Palm Beach counties to form a compact in January 2010 to coordinate mitigation and adaptation efforts across the region. The compact -- which covers 5.5 million people -- estimates sea levels off the coast will jump another 3 to 7 inches by 2030. That's on top of the 5 to 8 inches Florida has recorded over the last 50 years.

Florida is hardly alone. Americans across the country have been grappling with a range of severe, climate change-related weather events, including prolonged droughts, extreme precipitation, heat waves and, like Florida, coastal flooding. And majorities in both blue and red districts want federal action.

Perhaps it's time for Rubio -- and the other members of Congress who signed the Americans for Prosperity pledge -- to stop genuflecting to the Koch brothers and start listening to their constituents. After all, that's who they're supposed to represent, right?

Elliott Negin is the director of news and commentary at the Union of Concerned Scientists. UCS intern Kanoko Maeda provided research assistance.

Correction: This post originally misstated how much fossil fuel companies have contributed to the 25 senators who have signed the pledge since 2009 as $38 million. The correct figure is $3.8 million.