The box canyon of Telluride in Colorado was surely made by unicorns who clicked their golden hooved heels and created a natural amphitheatre straight from a kids picture book with mountain peaks that thrust skyward protecting the town below with daily alpenglow and rainbows.

Telluride definitely has a colorful reputation and it's a good one. Jaw dropping beauty is a given, so are winter ski steeps and powder bowls with no lift lines but the town actually comes into it's own from spring to autumn as festival fever takes over. 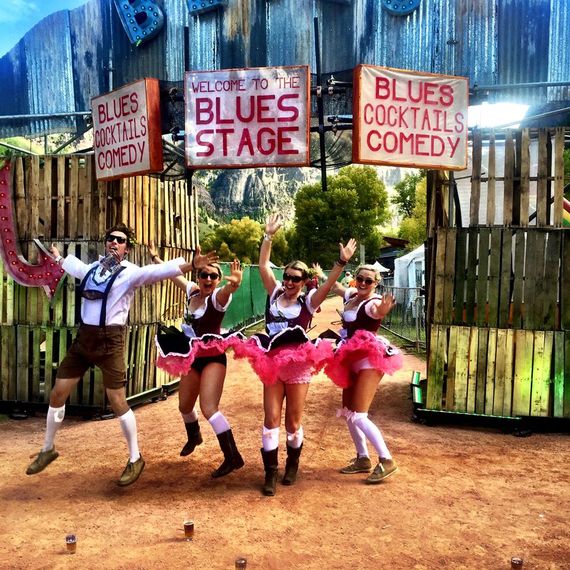 I had heard and written about The Telluride Blues and Brews Festival long before I stepped foot on the hallowed blues Town Park ground, the main site for some of the biggest names in music history for the past 22 years. Think Willie Nelson, Joe Cocker, the Flaming Lips, Lou Reed, John Mayer, James Brown, BB King, the Allman Brothers, Mumford and Sons and their friends.

The brainchild of Telluride local Steve Gumble who has an uncanny knack of choosing bands on the brink of stardom, the festival provides ample opportunity to get close and personal with both established and up and coming artists either via The Main Stage, the late night Juke Joints, the Campground Sessions or the opening and closing gigs at the heritage Sheridan Opera House downtown.

I may or may not have peaked too early, over excited by the last minute tickets I managed to wrangle for the sold out Nathaniel Rateliffe and The Night Sweats opening gig. The opening gig traditionally sets the tone for the festival ahead and Denver musician Nathaniel was certainly the hottest ticket in town thanks to recent performances on Jimmy Fallon and Conan and a Billboard charting Son of a Bitch single with a catchy chorus and a rocking band (the Night Sweats) that perform as though they were all born from the same womb.

My festival co-pilot and I accosted the coolest looking dude on Main Street who turned out to be Wesley Watkins, trumpet player with the Night Sweats who accepted our offer of a whiskey and shared his story of going from homeless in Denver playing trumpet for cash to get him off the streets and into his own accommodation to hitting the world stage. He has turned to meditation to help handle the band's recent fame as they tour the USA and head to London to play with Jools Holland, the British musician known for breaking acts in the UK. 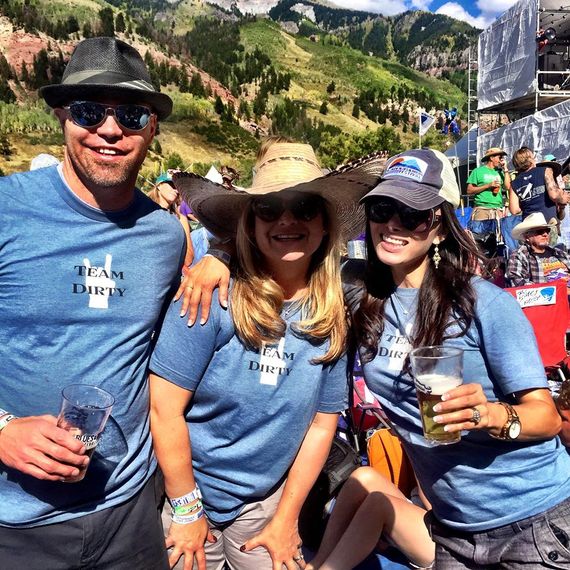 I can be a jaded gig goer, having worked previously as a national publicist for one of the world's largest record companies followed by years as a radio announcer for stations that make and break acts. Let's just say I have seen a fair bit of live music in my time and that witnessing Nathaniel Rateliff and the Night Sweats with an intimate number of fellow festival goers in a theatre site built in 1912 is up there in my music history highlights.

Just another special moment in a town known for getting under the skin of the hardest hearts to get them beating with beauty again. In true rockstar style we ended up backstage with the band, as you do, spouting forth all sorts of sycophantic pleasantries, as you also do, before being kicked out to continue our night sans musicians.

What followed was a standard Telluride Blues and Brews Festival night with drinks at 'the buck' (The Last Dollar Saloon) followed by a downtown penthouse party that lasted till the sun came up and then some. That's the beauty of Telluride, open hearts and open homes. The locals are surprisingly super friendly despite having their town overtaken by out of towners for many months. 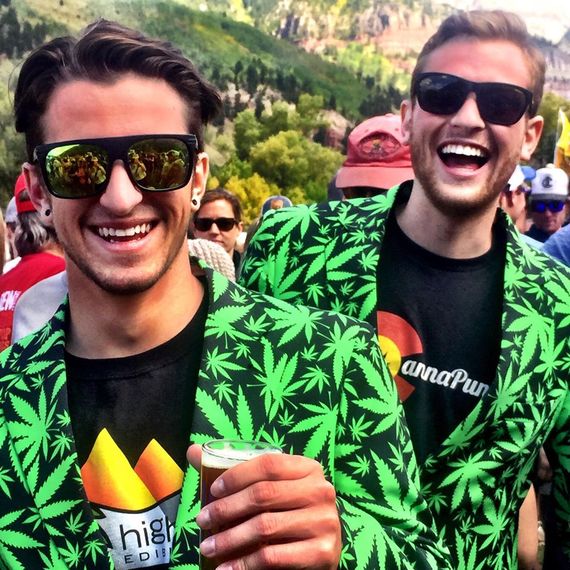 Expect festival goers in all sorts of clobber from marijuana print suits to Elvis impersonators, tie-dye, animal prints and more. Saturday is the 'big day' despite headliners ZZ Top playing on Friday night. Breweries set up tents on Saturday to battle it out on Master Brewers day with free beer tastings for all. Thoughtful locals thread pretzels on necklaces around their necks for randoms to pluck the salty crackers from to cleanse between beers. 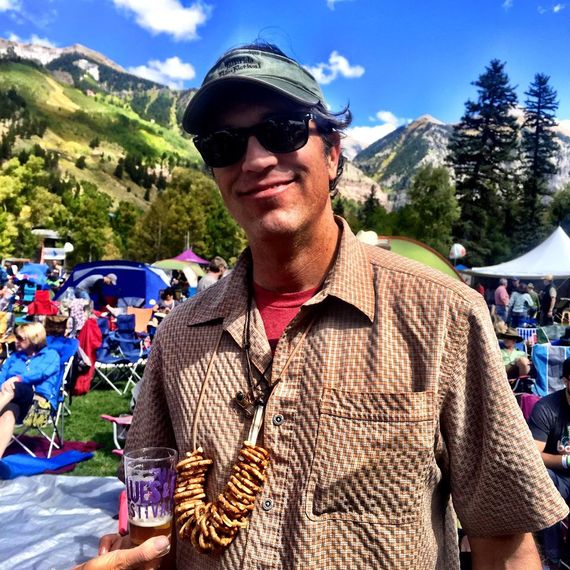 While the beer was going down I snuck off to the 'Campground Sessions' reserved for campers only. A small wooden stage by the river hosts some true music gems and Saturday was no exception. We found 83 year old Leo Bud Welch strumming his guitar.

Bud recorded his first album at the age of 80 and was named one of Rolling Stone's 10 new artists you need to know in 2015. His music is pure gritty gospel meets electric blues straight from rural Mississippi. If I could bottle him and take him home, I would. 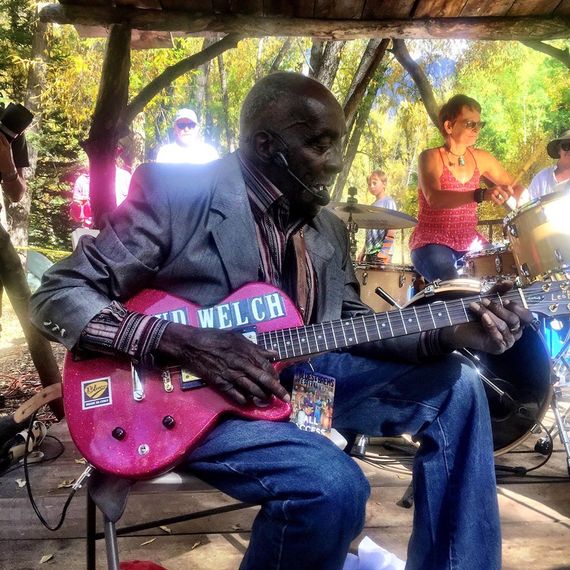 The beauty of the festival is you can dip your toe in where you want or throw yourself naked and screaming into the middle of the mix and inhale everything it has to offer. Be warned the latter may leave you in need of rehab come the week after as the schedule is hectic.

The dedicated line up super early or try to claim their spot in the line with well placed deck chairs the night before. The race for prime time tarpaulin position happens as the gates open and then many set up camp till the last chord on the last guitar on the last band before making their way to the late night shows in various venues. They may or may not eat, they may or may not sleep, but they will definitely repeat come sun up the next day until the last roadie leaves the main street of town. 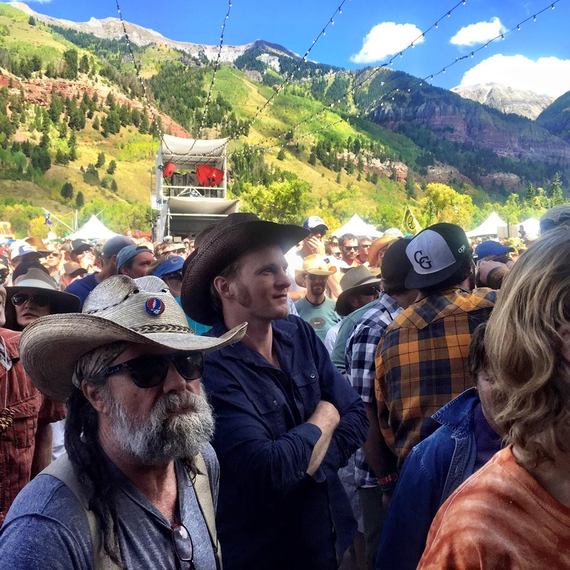 VIP ticket holders do it all in style with a raw food bar, private entertainment and a marquee in which to view the proceedings. Campers set up tents riverside and the remainder fill hotels and condos in both Telluride and the Mountain Village accessed by a free gondola.

Whichever way you approach it you will kick yourself for having never been to the festival before and be lining up for the first tickets released for the following year. Yes, it's that good, just ask the unicorns.

Rachael Oakes-Ash is a travel writer and ski journalist. You can read more of her life tales at www.elephanttruths.com and follow her on twitter @misssnowitall