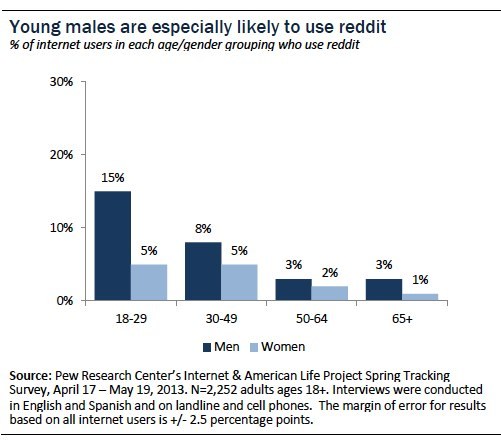 Men are twice as likely as women to use Reddit, according to a newly released study from Pew Internet on the site that calls itself "the front page of the Internet." The study, released on Wednesday, takes its data from an April-May survey of more than 2,000 U.S. adults about their Internet habits.

Despite's its front-page slogan, Reddit's demographics don't track with the Web in general, which is split pretty evenly between men and women. According to Pew, 85 percent of American men use the Internet and 84 percent of women. Still, more men might be attracted to some of Reddit's more popular main pages hese include "Gaming," "Technology," and "Science." That's not to say that there are no women interested in these topics, but women tend not to pursue interests in these areas.

It's not hard to see why men might feel more comfortable on Reddit. The site has such a reputation for sexism that one of its co-founders felt the need to write an open letter to the Reddit community earlier this year urging them to change their ways. His plea doesn't seem to have made much of a difference.

At the opposite end of the spectrum the "creepshots" group was devoted just to secretly taking and posting photos of unsuspecting women, many of whom were underage. That subreddit was shut down, but a similar group, "Candid Fashion Police" took its place. There is also a group called "Beating Women," which has over 34,000 followers and is exactly what it sounds like.

There are also popular groups especially for women, like "Makeup Addiction," a subreddit with over 78,000 followers for women to give and receive makeup advice, and "Girl Gamers," for ladies who love video games.