In just over 24 hours after posting one man's heartbreakingly heroic story on Reddit, more than $80,000 in donations had been pledged to a Kenyan orphanage where he saved a group of kids. The donations came from all 50 U.S. states and 46 different countries, the AP reports.

The full story was posted by Penn State student Ben Hardwick under his username TheLake, where he told Anthony Omari's story: "two days ago [Omari] returned from the hospital after being hacked in the face by a machete defending an orphanage of 35 children by himself. Think we could raise the $2,000 needed for the remainder of the cement/barbed wire wall to keep both him and the children safe?"

Hardwick went on to state that there had been intruders two previous nights at the the Faraja Orphanage in Ngong, Kenya. When Omari had chased them out by throwing a hammer and hitting one of them, their next intrusion became personal:

"The following night, the three thugs returned, presumably to avenge their friend. Omari put up a fight but was outnumbered. The last thing he remembers was being struck in the face by the machete. He has been in and out of the hospital since, yet remains positive and confident that the suspects will one day see justice.”

Hours into the request for donations, Omari's story went viral. As donations came in, so did his gratitude, and on midday Friday, Hardwick posted a picture of the orphanage and children, thanking Reddit and users for the donations.

Hardwick, who was in Kenya for an internship, requested donations go through Longonot Education Initiave. To get involved, click here.

Reddit Donates $80,000 To Orphanage After Man Trying To Save Kids Attacked With Machete 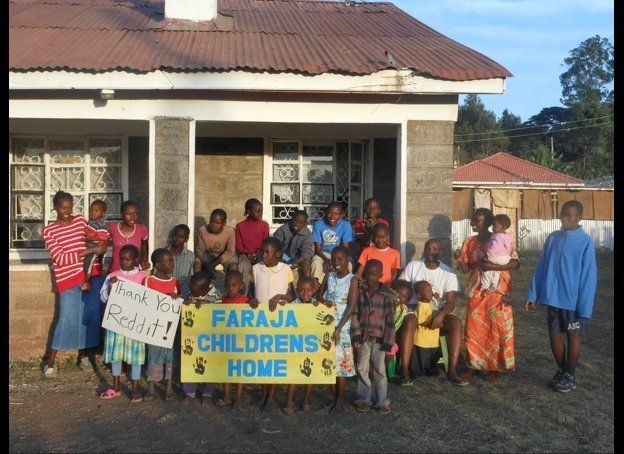