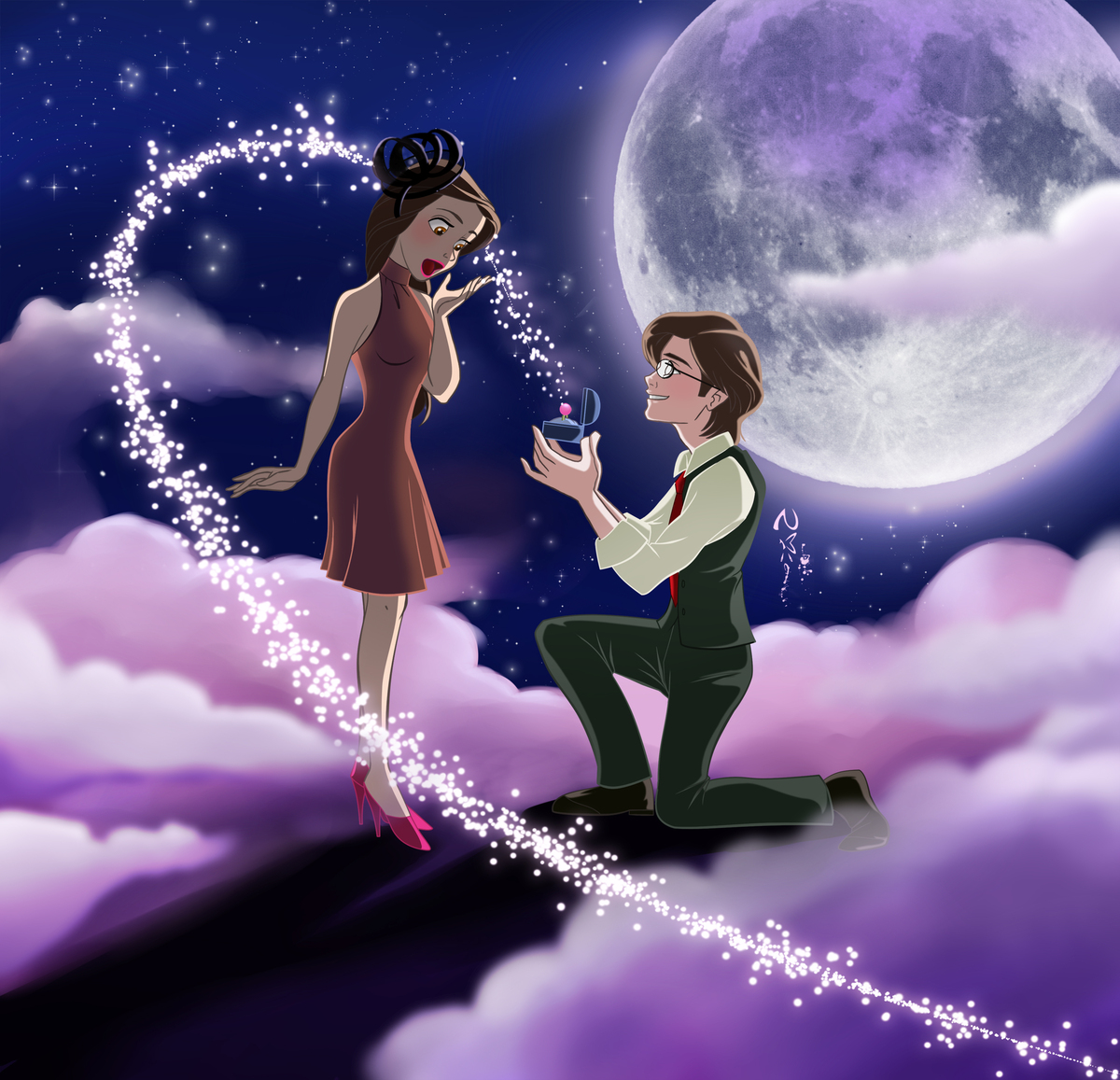 Yesterday I proposed to my girlfriend of a year and a half. I didn't take her out to a nice restaurant, on a romantic walk along a beach, or pop the question during halftime at a major sporting event. I proposed to her online, as SirTechnocracy on Reddit..

I did so through 21 commissioned pieces from 18 artists around the world each representing different artistic styles or fandoms that play an important role in our relationship, which, to a great extent, grew around nerd and online communities. These commissions were placed through the popular online art community DeviantART. After going through around 4,500 online artists, I selected those who I thought could add the most diversity to the collection and sent them an album featuring pictures of us as a couple, requesting that they use them for inspiration in a proposal-themed piece.

Once I had commissioned the pieces, I had to find a way to get them in front of my girlfriend, Simone H Smith, who uses the username LadyTechnocracy on Reddit , during her daily routine. My plan was to post them to /r/pics (a subreddit, or sub-section of the site, devoted to images), however the subreddit has a rule against posts targeted at specific individuals. To reduce the likelihood that this important post be taken down (or buried), I decided to post a proposal to /r/AdviceAnimals as well. To post to /r/AdviceAnimals you have to use memes (advice animal image macros), so I created a proposal-themed series of image macros (early yesterday morning) that would resonate with the Reddit community, link to the series of illustrations I commissioned, and gain enough traction on Reddit to reach LadyTechnocracy without being taken down for breaking the rules.

I was going to leave as little up to chance as possible and had about ten pages of pre-written replies and cross posts to other subreddits to ensure that at least one post would make it to the front page (both of my initial posts made it to the front of their respective subreddit and one to the default front page of Reddit). After making the posts I hid in the next room (we live together) and waited for her to make a noise so I could jump out and do the whole "one knee" thing. It only took a couple hours for the Advice Animals post to make the front page.

After seeing the post and having me propose to her, LadyTechnocracy (Simone Smith, in real life) was completely overwhelmed. She ran up and hugged me almost in tears for what was between one and three minutes. I had to remind her she needed to say yes or no. She responded with a quick yelp of "Yes, Malcolm Collins, I will marry you. Now give me the shiny thing."

Within a day, not only had Reddit exploded in response, but we had been covered in CNET, PC Magazine, BetaBeat, Business Insider, The Daily Dot , and the wedding section of the Huffington Post. These reactions range from well wishes to death threats- both on and off Reddit (but what doesn't get you death threats these days?). I will address some of the common responses below. 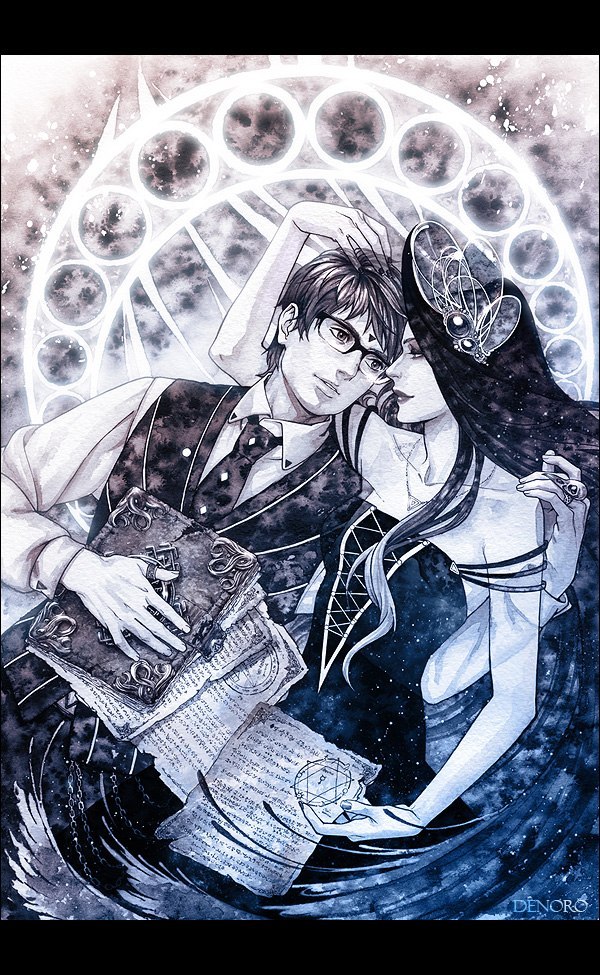 I Now Pronounce You Neckbeard and Wife

We were frequently referred to as "neckbeards" (a term used to describe the stereotype of the unemployed, fat, socially incompetent geek living in his mother's basement). In a general sense, there is no strong evidence to back up this stereotype other than its ubiquity in popular media. In reality, the online community is made up of those from all walks of life. For example, both of us would generally be considered extremely professionally successful, attractive, and socially competent. This fictional straw man neckbeard is a character that has been created to protect an individual's pride when he or she is teased by a member of the online community or is looking for an excuse to dismiss some aspect of online culture. 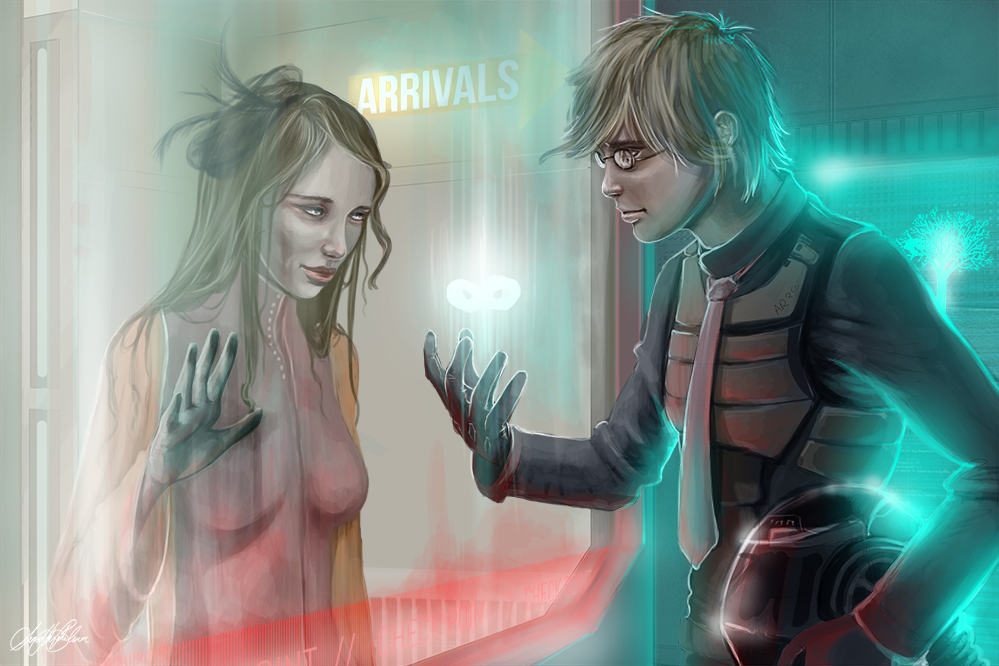 Why Not Propose in Person?

Many were befuddled as to why I would not simply propose to Simone in person. This question comes more from a misunderstanding of the situation. The proposal itself happened in person; posting the pictures on Reddit was more equivalent to broadcasting "will you marry me" on a Jumbotron at a sports game, then getting down on one knee in the stands to pop the question. 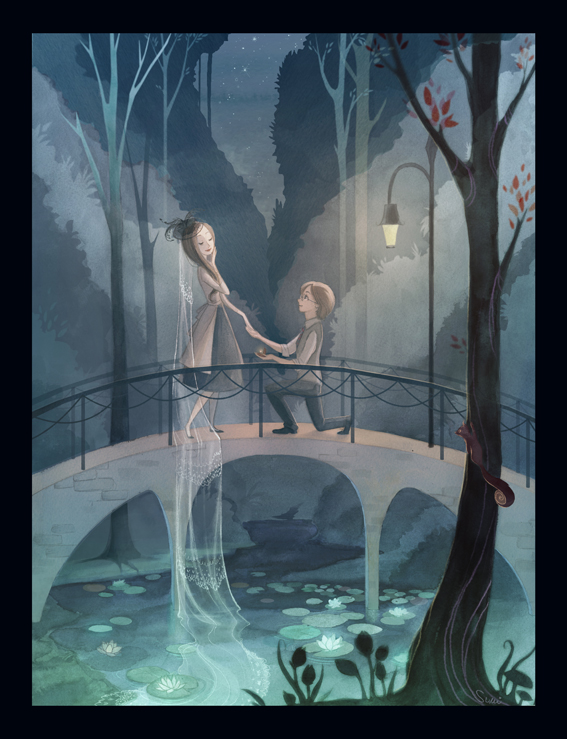 Why Propose in Such a Public Manner?

There was also confusion as to why I chose such a public venue. Why not somewhere more personal? Public venues are common in popular proposal scenarios; even the most classic restaurant proposal intentionally incorporates strangers. If you go back to the sports game proposal, the scenario plays out in front of thousands of strangers. Proposing over Reddit made it possible for me to both propose in front of a large audience and also maintain the privacy of asking my now-fiancée to marry me at home.

Why Spend Money on Commissioned Art?

Others wondered why I chose to spend my money commissioning art rather than take Simone to a fancy restaurant, on helicopter ride, etc. The illustrations I commissioned will last the for rest of our lives; they serve as a tangible keepsake and a constantly-visible memory of the day I proposed. While their styles and references may become dated to the general public, they will always bring us back to special moments in our relationship. Moreover, commissioning artists allowed us to give back to the online art community and hopefully encourage others to consider art commissioned from sites like DeviantART as part of a romantic gift.

How Could Anyone Enjoy [INSERT NERDY THING] in a Proposal?

Many aspects of my proposal were laced with nerdy references that made many cringe. As a matter of course, nerdy interests are not enjoyed by everyone. In creating my proposal, I tried to collect all of the most influential and iconic aspects of nerd and online cultures that were meaningful to our relationship (which is, admittedly, very nerdy in nature). Many people were horrified that I did so, but my goal was to make this meaningful to Simone / LadyTechnocracy, not the world.

After agreeing that my proposal would not seem romantic to most people, Simone commented in the Advice Animals thread that my proposal "however, epitomizes all my favorite things, as well as many elements that bought us together. If proposals were a test of how well one partner knows the other, SirTechnocracy definitely passed."

One of the uniquely-interesting things regarding criticism about the proposal's nerdiness is that it was often levied with a side note of "except x," in which the individual making the criticism admitted to liking one nerdy thing but being confused as to how anyone could enjoy the others. 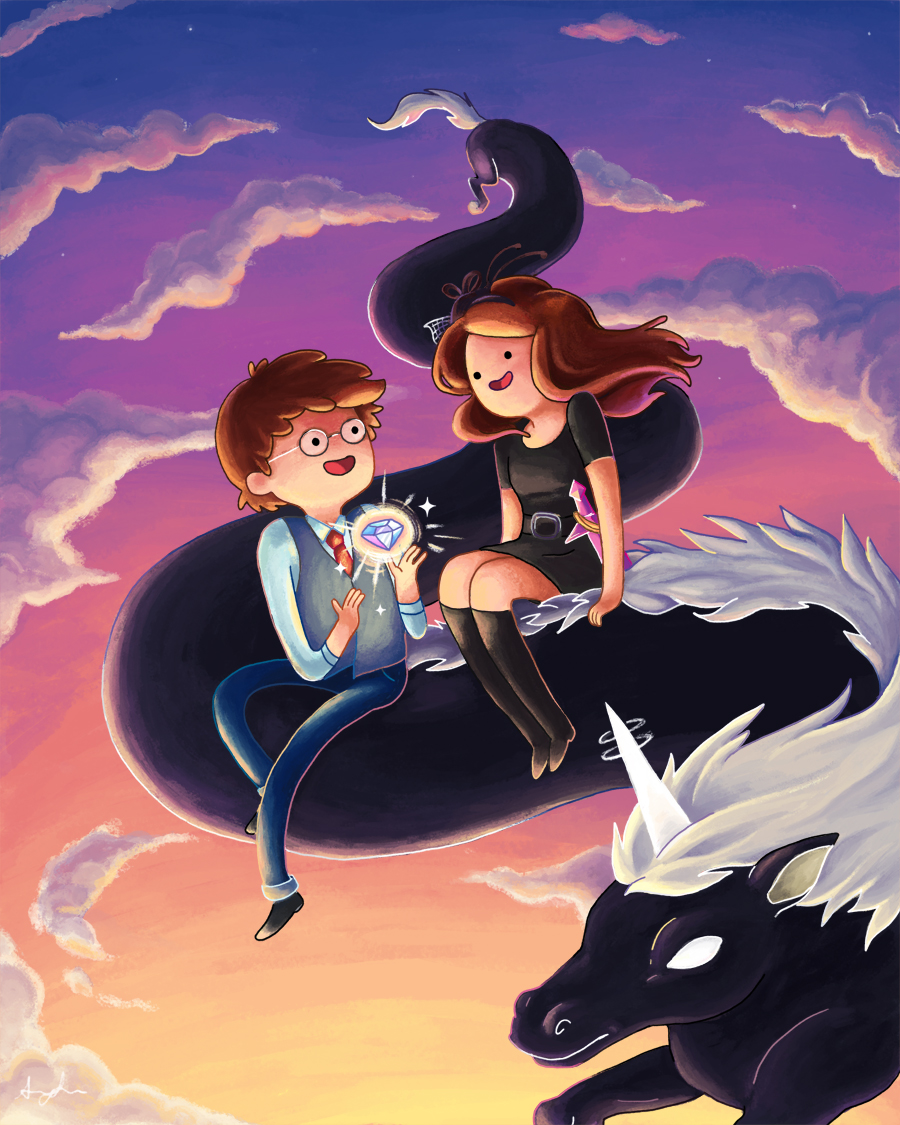 General trolling was another common response. Should someone propose online and not expect griefers (trolls attempting to make you angry), one would have a shockingly low level of familiarity with the way the internet works. The only effect the trolling had was to make it difficult to determine who had legitimate grievances, which defeated any negative effect those with real grievances may have had.

At the end of the day, most of the response ended up being strongly positive. With more heartfelt well wishes than one could hope for. Even many of those involved who poked fun at my actions, such as the individual who created a post which reached the top of the front page on Reddit joking about the proposal, sent us sincere and kindly worded messages.

Most importantly, Simone found my proposal to be romantic- and she said yes! In the end, asking someone to marry you should be a personal, unique, memorable experience. I hope that by sharing my experience, I may encourage others to think more about what their significant others would enjoy most, rather than what conventional wisdom prescribes. 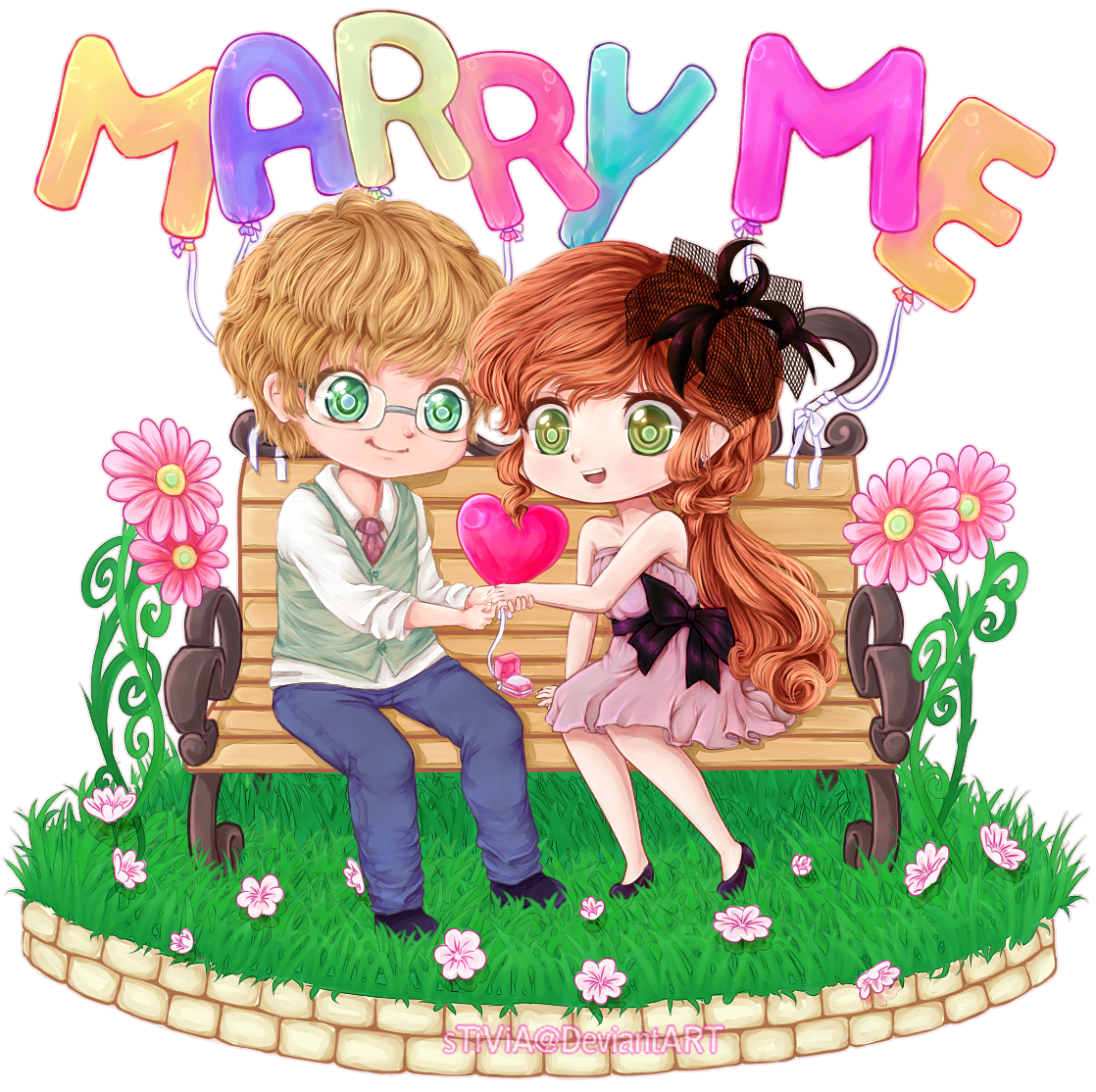 Full gallery can be found here