The past few years of upheaval in how people grow, cook, think about, and eat food has left no corner of the supermarket untouched. Even bread, that most ancient, simple, beloved staple of diets around the world, has been the subject of both crisis and passionate revitalization. But behind every machine-sliced sandwich bread or carefully crafted artisan loaf is a simple question of language. 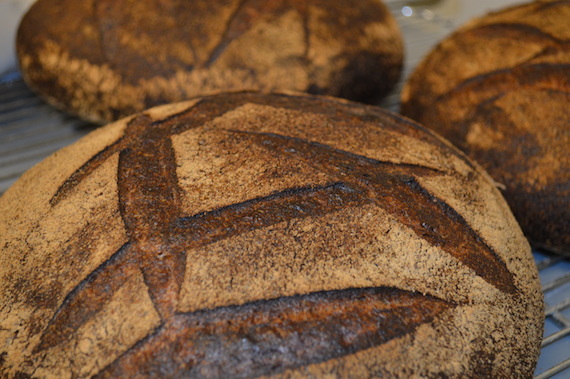 What do we actually mean when we say "bread"? The FDA has established a set of regulations, designed to protect consumers, that regulate how foods are labeled and identified. In many cases these rules are frightening reads as they clearly placate the food industry. At their best, these regulations restrict the labeling of so-called imitation foods, preventing producers from fooling consumers into buying and consuming products under false pretenses.

For example, according to the FDA, juice becomes a "drink," "beverage," or "cocktail" once it has been diluted to less than 100-percent juice derived from fruit or vegetables--great news for juice and the people who drink it. Juice with added ingredients must be labeled as "x-percent juice with added sweetener" or "x-percent juice with added preservatives." This allows consumers to differentiate real juice from the sugary drinks marketed as the same thing and select it as the healthier option. The same goes for cheese. Fake cheeses, made by melting and mixing already made cheeses and forcing their homogenization with emulsifying agents to form a "plastic mass," are identified properly as "process" cheese.

Bread, however, is at the mercy of more complex rules. FDA regulations state that for bread to be labeled as "bread," it must be made of flour, yeast, and a moistening ingredient, usually water. When bleached flour is used, chemicals like acetone peroxide, chlorine, and benzoyl peroxide (yes, the one used to treat acne) can be included in the recipe and are masked under the term "bleached." Optional ingredients are also permissible in products called bread: shortening, sweeteners, ground dehulled soybeans, coloring, potassium bromate, the now infamous azodicarbonamide (publically denounced because of its use in both yoga mats and sandwich breads), and other dough strengtheners (such as bleaching agents and vital gluten). All of these unnecessary and potentially harmful ingredients are allowed in a recipe for a food product that can still be labeled as "bread." An additional condition allows the use of other optional ingredients not specifically identified, as long as they do not "change the basic identity or adversely affect the physical and nutritional characteristics."

What then are the "basic identity" and "nutritional characteristics" of bread? Without a clear definition, just about any additive--questionable or not--can be used as an ingredient. 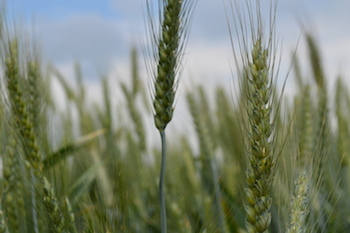 Bread in its simplest form can be made with ground grain and water. Leavened bread requires a rising agent, originally provided by naturally occurring yeast and bacteria. A small amount of salt enhances flavor and contributes to the functionality of the dough. Variations on these basic formulas--such as pita, challah, bagels, roti, and naan--differ by culture and geography. In the U.S., leavened breads are the most popular type, with the basic formulation of flour, water, leavening, and salt. As has been the case for millennia, these four ingredients alone are all that are needed to transform flour into an edible, appealing, and accessible food.

But ingredients, whether included or excluded from a recipe, are not the only defining characteristic of a food. The methods and techniques used to transform raw materials into a finished product are also essential to any food's identity. The first cold pressing for extra virgin olive oil is one example; aging cheeses like the famed Parmigiano-Reggiano, is another.

The process of long fermentations that include both yeast and bacteria activate raw dough into one that is alive with enzymatic activity. The basic identity of leavened bread depends upon these enzymes for its performance as a risen loaf, as well as its flavor, texture, and importantly, for its nutritive characteristics. Yet these types of long yeast and bacterial fermentations are mainly a thing of the past. Industrialization and fast-paced baking have all but eliminated the process of full fermentation in order to decrease the time and space necessary for the production of today's bread. Instead, dough now undergoes only partial fermentation through the use of a truncated, yeast-only process fueled by added sweeteners and commercial yeast. This dough is then whipped up into a conglomerate, baked, packaged, and labeled as bread.

To re-define bread using the most simple and traditional formulation--the product of the bacterial and yeast fermentation of flour, water, and salt--would render virtually all of what qualifies as bread on supermarket shelves today as something else entirely, according to our own FDA requirements. Pre-sliced sandwich bread, including "healthy" and whole-grain versions, are obvious deviations from this basic formula, but they are not alone. Even bread produced in artisan bakeries and the in-store bakeries that are ubiquitous in high-end supermarkets (which more often than not are merely finished off par-baked products produced elsewhere) rarely fit the simple definition of bread above. 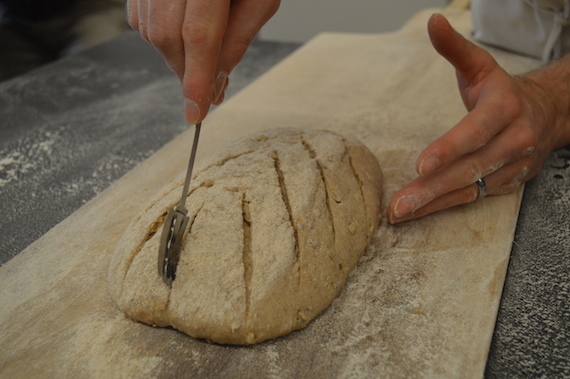 But in the long run this would be a step in the right direction. Consider the nutritional losses that come from deviating from this basic bread recipe. Ingredients like dough conditioners, strengtheners, bleaching agents, fats, extra salt, and sweeteners only serve the modern industrial need for speed and automation. The change in the process itself also compromises nutritional content. Stunted, yeast-only fermentation produces bread with a higher glycemic index, increased loads of undigested gluten, and lower bioavailability of micronutrients compared to a loaf that has been long fermented with the action of acidifying and proteolytic bacteria. Whole-grain breads in particular need these fermentations to make their health-promoting, nutritious components available to the human digestive system. Giving up this full fermentation in turn requires sweeteners, fats, and additives to match performance and create flavor.

Given this state of affairs, aren't we in fact "adversely affecting the nutritional characteristics" of bread, as well as changing its "basic identity"? No wonder so many people now consider a food that has always been a staple, relied upon by countless people for daily nourishment, as unhealthy.

It's time we seriously reconsider bread and what we allow to be called by that name. By categorizing all bread under one name we are potentially demonizing what in its basic form can be a delicious, inexpensive, and nutritious source of whole grains. Why not follow the FDA's cheese model that describes the orange "process cheese" slices that get thrown on millions of hamburgers every year as "American cheese"? Let's call "bread" that deviates from the basic identity of bread and its nutritional characteristics "American bread," or more technically "process bread," "bread with added preservatives and sweeteners," or even "diluted bread." Like juice, consumers can then distinguish between bread and its inferior derivatives.

There will always be debate about whether high- or low-carbohydrate diets, diets high in animal protein or plant-based, or those high in whole grains or "grain-free" are best for optimal health. The food industry in particular depends on these debates to develop and sell new products. But we can generate critical mass around what we all know isn't good for us: "breads" loaded with added sweeteners, fats, too much salt, and unnecessary additives, especially those made with highly refined white flour. Whole-grain breads do not need extra gluten, salt, fats, sweeteners, or unfamiliar, unpronounceable ingredients to taste good: they need unrefined flour, true fermentation, and skilled bakers. Their health benefits depend upon it. In the interest of nutrition, health, and taste, the time is right to clean up bread.

PhD student at The Bread Lab