Each day, my room fills up with over 100 students who collectively take up every ounce of my heart. They amaze me with their creativity and intelligence. They inspire me with their selflessness and willingness to do whatever they can to help others. They are compassionate, empathetic, and capable of unthinkable greatness. This would all be wonderful if they saw what I see in them, but in today's world, it's not that easy.

Every outfit, decision, pound, comment, hairstyle, and word is scrutinized because their lives are also lived online. Too many attach their self-worth to the amount of likes and comments they get on their photos and posts. This epidemic has led to countless kids being stripped of the inner and outer beauty that countless others see but that they have unfortunately lost sight of over time. What once was a bright and vibrant child, in many cases, has become a young adult carrying the heavy and destructive labels society has hung on them.

This is the only thing about teaching that I hate, and I don't use that word often due to its power. I hate that my students, who I truly feel are the most beautiful and remarkable people on the planet, don't see their own power and light. I hate that my students obsess over insignificant aspects of who they are yet cast aside the fact that their character far outweighs anything else about them; however, I love that LaPorte High School has students with enough bravery and creativity to try and combat an ever increasing issue.

I saw Dove's #SpeakBeautiful campaign about transforming the negative way people speak about themselves and others. I clicked join, but I didn't want to just have my name on a list. I wanted to truly be a part of the campaign and take it to the people I love so dearly. I sought to make a video that shined a light on an issue so many silently grapple with daily. I brought the idea to my yearbook students, and they were wholeheartedly on board, having also been victims of the negative voices chipping away at their spirits.

I turned over the creative reins to Megan Berchem, yearbook co-editor, because her talent and heart create the most beautiful stories. The girls were asked to pick something harmful they have repeatedly said about themselves to write down on a sign. I was asking more of them than I had realized in that moment. Essentially, I had them destroy any armor they had on and made them vulnerable. They were putting the one thing that broke them down quicker than anything else on display for their classmates and the world. The girls struggled verbalizing their personal poison, and watching them walk around with their signs was heart breaking. To see such talented girls shackle themselves with such harmful labels forever changed the way I will deal and speak to others.

While I started to question if I was doing the right thing in asking them to be so open, my fears were quickly pacified when I watched them rip up what they wrote, symbolically showing themselves and the world that this label not only wasn't true but would no longer serve as a road block on their journey to reach their dreams. There was a newfound lightness, and the smiles I saw are ones that will stick with me for the rest of my life.

To end the video, we wanted to #SpeakBeautiful and highlight what the girls love about themselves. What might be most touching is the fact the positive words the girls chose went beyond the superficial. They chose words that are the truest measure of beauty, not the ones media uses to classify us. Words like talented, leader, caring, passionate, and strong filled up the room and attached to each of them. As the words settled beneath their skin, I saw a new twinkle in their eyes. After each clip was filmed and put into the video by the amazing Megan Berchem, the excitement for what they all were doing grew. They all felt powerful and proud. 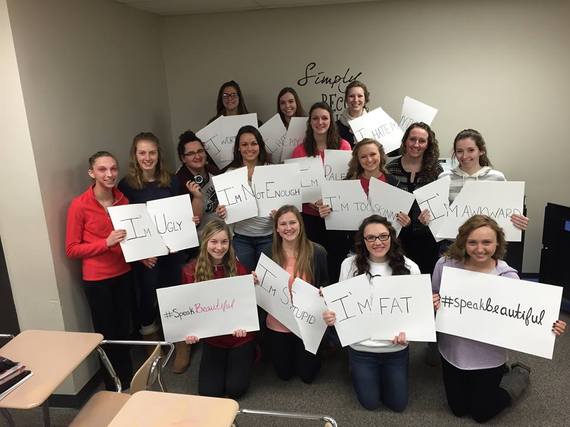 It's not about attention or having a popular video. This all is about people focusing on and embracing the best of who they are and choosing to let that be what defines them. It's about not allowing anyone else control their self-worth. It's about people realizing the power they have within themselves to be a part of a positive change if they are brave enough to use their voice. I saw a group of students become something more right before my eyes. They became the kids I see when I look at them. I know that these students have the power to inspire others to #SpeakBeautiful, and I think they know that now, too.

There are moments in life where all the trials and tribulations make sense, moments that are so perfect that you wish you could bottle them up to be relived over and over. This whole experience has been that for me. I will never forget what these students have done and how they've impacted so many already. Life can be so much more if we all were as brave and strong as the beautiful faces on the screen and the one behind the camera. In an age when students are judged in endless ways from test scores to pant size, it's paramount that we teach them to focus on what's truly important about themselves. Their moral fabric and character are the true indications of who they are, and these kids are extraordinary. 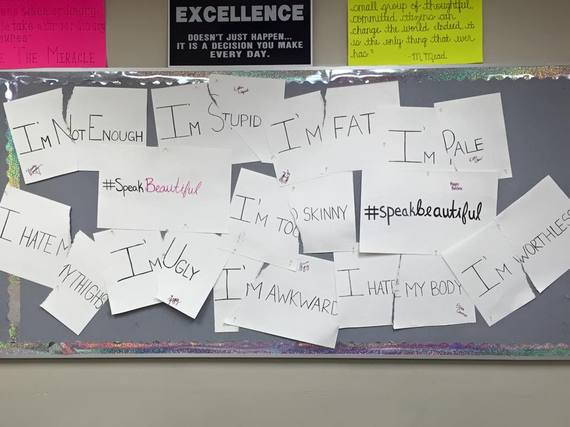