Infographic
American advertising on network television during prime time features an astonishing number of redheads. A new study finds that 30 percent of ads during peak TV viewing hours include someone with red hair, even though the frequency at which natural redheads appear in the human population is generally estimated between 1-2 percent worldwide (2-6 percent in the U.S.). Eliminating ads in which no people were present, the percentage of ads with redheads rises to 33 percent.

Upstream Analysis, a social and traditional media analysis firm, in collaboration with Critical Mention, a top provider of real-time TV monitoring and media intelligence, analyzed five evenings of prime time television (8:00-10:59 p.m.) on ABC, CBS, Fox and NBC over a period ranging from mid-April to late June. Within those 60 hours of TV, more than 1,700 ads were analyzed for the presence of redheads, either in featured roles or as ancillary characters. 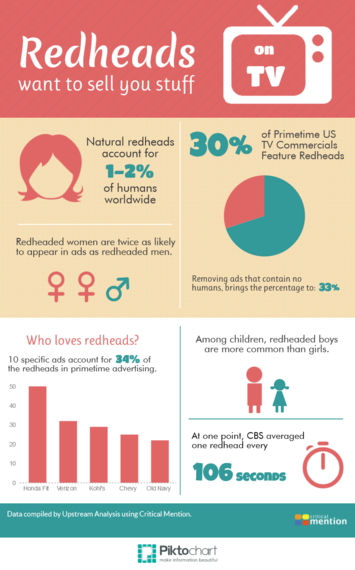 Overall, 56 percent of ads with redheads featured them prominently as main characters, such as in the Sprint "Framily" ads and the Citi Card "Lunch" spot. The other 44 percent were secondary characters or "extras."

Counting the individual people in primetime TV ads revealed a percentage of redheads a bit closer to reality: out of 7,122 people counted, 761 people -- 11 percent -- were redheads.

However, among children who appeared in ads, redheaded boys were more common than redheaded girls. Thirteen percent of all boys counted were redheads compared to 9 percent of girls. 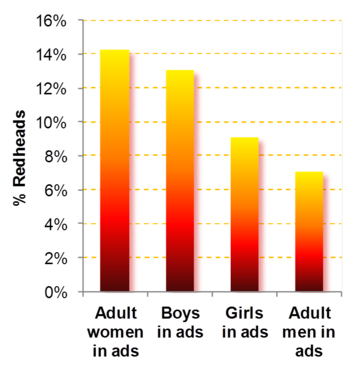 Out of 1,709 ads, there were 575 unique commercials by advertisers, of which 366 aired two or more times over the course of the five evenings analyzed. Some ads that included one or more redheads aired in heavy rotation. As a result, 10 specific ads (2 percent of all unique commercials) accounted for 34 percent of the redheads seen in primetime TV advertising. Verizon seems to have a particular affinity for redheads, as three of its commercials landed on the list of top 10 spots. 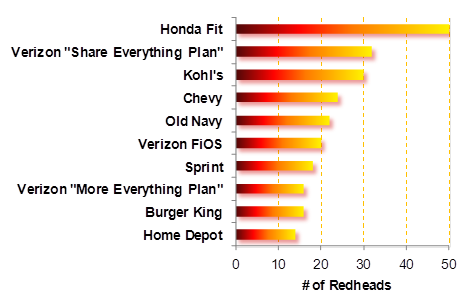 The study found some modest variation among the four networks:
•CBS viewers were exposed to the biggest number of ads (453) as well as the most redheaded individuals (30 percent). If there was a Nielsen rating for the most redheads, CBS would be winning the Thursday, 8 o'clock time slot, averaging in excess of one redhead every 106 seconds.
•ABC aired the second highest number of ads (438), but those ads accounted for the fewest redheads (20 percent).
•Fox viewers enjoyed their programming with the fewest number of ads (385), but were exposed to the second highest proportion of redheads (25 percent)
•NBC's statistics in terms of number of ads and proportion of redheads were entirely unremarkable. 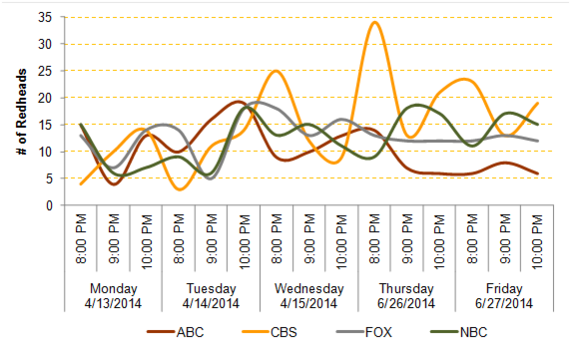 Explanations for the prominence of red hair in commercials vary. Some speculate that it is because they often photograph well. Others point to research showing that the color red increases the heart rate, stimulates the appetite and is associated with intense emotions and sexual attraction. Neurological research also shows that humans are hard-wired to respond to novelty in a way that "motivates the brain to explore, seeking a reward." The rarity of red hair in the human population makes the appearance of a redhead a novel experience.

Further research is needed to determine if the prominence of redheads in commercials has diluted their novelty to the point that they no longer trigger the emotional and physiological responses that advertisers are seeking.

Methodology
The figures in this study apply only to humans with red hair, and cartoon or animated representations of humans, such as in the ad for Abilify. They do not include animals such as the hamster (aka "Dad") in the Sprint commercials, or Muppets such as "Animal" in the Toyota Highlander commercials. (For the record, the Toyota Highlander ads contained seven Muppets with red "hair": Animal, Beaker, Clifford, Dr. Teeth, Pepé the King Prawn, Scooter and Sgt. Floyd Pepper. There were seven non-redheaded Muppets.)

In addition, the following types of ads were excluded from analysis:
•imbedded product placement or in-program ads such as The Voice's promotion of the Kia Sorento or American Dream Builders' promotion of Lowes;
•local or regional ads such as furniture stores, individual car dealerships and regional cable providers Time Warner Cable and Optimum;
•montages of movies, TV shows, games or other prepared media as seen in ads for Netflix and Google Play;
•news breaks;
•people filmed in black and white such as T-Mobile ads and American Express ads with Tina Fey; and
•trailers for movies or TV shows.