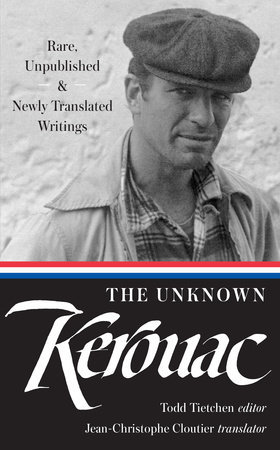 The Library of America's definitive collections of Jack Kerouac's writing continue to reveal the full impact of his writing on the American literary landscape. In 2012 they published a complete collection of his poetry and have followed up with "The Unknown Kerouac" a volume of previously unpublished private journals and newly translated stories written originally in French-Canadian patios, Kerouac's first language.

By the 60s Kerouac was decidedly out of the spotlight and admitting his disdain for the "On The Road" myths that clung to him, as well as his image as the leader of the glamorous Beat generation writers. He was much more concerned about being judged on the merits of his entire literary legacy.

"The Unknown Kerouac" goes a long way in revealing the full scope of Kerouac's artistic ambitions. Editor Todd Tietchen deftly introduces each story in context of Kerouac's life, and details how some of these early writings anticipate his later, more famous books. Jean-Christophe Cloutier, in his introduction, explains the precision and artistry of translating the patios manuscripts.

Born Jean-Louis Kérouac in Lowell, Massachusetts in 1922, Kerouac was the second son Joseph Alcide Leon Kerouac and Gabrielle-Ange Levesque. His parents spoke French at home and Jack did not learn any English until he was five. Kerouac's brother Gerald died at age ten, and the author wrote about their immutable bond in 'Visions of Gerald.'

Jean-Louis was a star student and athlete in high school and entered Columbia in 1940, excelling in French and literature courses. He was sidelined in a football accident and a year later he was in US Navy boot camp at Newport, disastrously it turned out, sent psychiatric observation for repeated "insubordination." During the 40s in New York, Kerouac becomes friends Allen Ginsberg, William Burroughs, John Holmes, Lucien Carr and other writers and poets of the so called 'Beat Generation.'

Kerouac's "Journal 1951" written during his time at a Veteran's hospital and a trove of personal he personal journals, full of full of confessionals, poems and musings and is his blueprint for the kind of American writer he wanted to be. His literary heroes included Dostoyevsky, Melville and especially Marcel Proust. Among other things, he formulates his theories of his so called 'spontaneous' aesthetic, inspired in part by jazz improvisation.

This volume includes the first time English translations of Kerouac's novellas " The Night is My Woman" ('La Nuit est ma femme') and "Old Bull in the Bowery" ('Sur le chemin'). 'Night'is exemplar of Kerouac sensualist atmospherics and visceral dialogue. "Bull" is his 1952 memoir of the "escapade of mistakes" as it recounts Kerouac and Neal Cassady as kids in 1935 along for the ride with male relatives on a desperate trip in New York. This surreal retelling stylistically is, Kerouac writes Cassady "the solution" to the Road plots.

The altogether astounding "Memory Babe," written in 1957, is his verite memoir of his family life in Lowell, written in 1957, he summons the 13- year old Kerouac's "Versailles of the child mind." Tietchen rightly cites the memoir as part of Kerouac's "comprehensive literary ethnography" of French-Canadian life of that era "mapping and preserving a lost world."

"I Wish I Were You" is a noir portrait of his New York contemporaries in the 40s was published posthumously in 2008. It is his first portrait of what Kerouac's "found" generation of New York Bohemia. Startling in its psychosexual frankness, Kerouac rewrote the 40s version he co-authored with William Burroughs.

This new collection is an essential volume for Kerouac fans, for those who have only read his most famous book; this volume is a chance to rediscover a brilliant writer before, during and after that mythic trip On the Road.