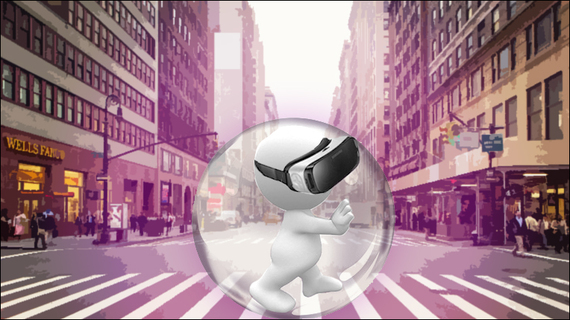 
We are hearing a lot about Virtual Reality (VR) lately--so much so that 2016 has been called "The Year of Virtual Reality." What is the potential of VR? Let's do a thought experiment. Imagine a time when virtual reality systems exist that can help you with your anxiety disorders; help soldiers overcome post-traumatic stress disorder; allow children to learn about gorillas by virtually becoming an adolescent gorilla; enable would-be travelers to visit and tour a foreign city by "riding around" a virtual replica of the city; or reduce the pain and anxiety of pediatric cancer treatments.

When will all these applications arrive? Actually, they are all applications of virtual reality that you could experience 15 or 20 years ago. Virtual Reality is at least as old as the Internet and much older than the World Wide Web. Up to now, however, it has had limited commercial success due to the cost and quality of the technology that was available. The current excitement over VR has been generated because major technology companies such as Facebook and Microsoft are investing significant amounts of funding into VR development to produce better products at a lower cost than ever before.

Virtual Reality has one distinguishing feature--immersion--which is not found in other types of displays. Immersion isolates you from your current physical surroundings and puts you, visually and aurally, into a computer-generated environment. This is an important feature for some applications, such as certain types of training, exposure therapy, practicing cultural interactions, and (recently) "experiencing" news events. As an example, consider Virtual Reality exposure therapy. Exposure therapy is used by clinical psychologists to treat anxiety disorders such as fear of flying, fear of spiders, fear of driving, or fear of public speaking. The idea is to gradually expose a person to the feared objects, activities or situations in a controlled and therapeutic manner. Over time the person habituates: their fear reaction decreases.

You can imagine that there are some cases where it is difficult to arrange exposure to a real situation or object. If you are afraid of flying, it would be ideal to be able to go to an airport, sit on a stationary plane with the engines off, with the engines on, moving on the runway and eventually taking off and flying in both good and bad weather--and to continue to experience each of these stages under supervision of your therapist until your fear habituates. This is not practical with a real airplane but is easily doable in Virtual Reality. It is also used in the treatment of PTSD for soldiers returning from combat in Iraq or Afghanistan. In this case the therapy involves re-experiencing their most traumatic events related to their PTSD, such as running over an IED. When first commercially introduced 20 years ago by Virtually Better, the cost of these types of clinical applications was around $30,000 for hardware and software. Now we see the emergence of high quality head-mounted displays (HMDs) such as the Oculus Rift, HTC Vive and smartphone-based Google cardboard that are priced in the hundreds instead of the tens of thousands of dollars.

However, Virtual Reality and immersion also has a downside. The isolation from your real, physical environment that makes VR great for some applications also makes VR no more than a good news story for a lot of other applications. Physically walking around with a HMD is not an option unless you have an empty room containing nothing you can trip over. Even then, you can run into a wall. I once had a visitor to my lab--who was standing on a virtual ledge--decide to jump off the ledge at the urging of her colleagues. Since she could not see where the real floor was, she ended up sprawled on the floor in a $20,000 pile of VR and tracking equipment! Even if you are experiencing VR while sitting, not knowing who is in the room with you or what is going on around you is not comfortable for many people. Even most gamers are not going to spend much time in a HMD that blinds them to their immediate surroundings.

If I peer into the future, I predict that Virtual Reality will continue to be a niche technology with a few important and successful applications that require immersion environments. Commercially, VR is not going to be the next Internet or smartphone. However, much of the technology being developed for VR can also be used in what is usually call mixed reality. In mixed reality, you see the physical world around you while also seeing virtual objects added into the real environment. This gives us the best of both worlds--a virtual reality that does not isolate us from our physical environment. A current example with promise is the Microsoft HoloLens. When the price drops to hundreds of dollars for a viable commercial mixed reality system, a real technological revolution will begin.