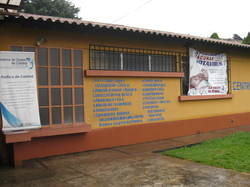 In December, I gave my wish list as to how we can end the carnage caused by diarrheal disease -- which kills approximately 2,000 children every day and three quarters of a million every year. Our friends at DefeatDD reminded me of a crucial element of what it will take to end diarrheal deaths -- the rotavirus vaccine.

Rotavirus causes about one-third of diarrheal deaths in children; vaccinating children against it could save hundreds of thousands of lives and make life easier for so many parents.

January to March is the peak infection time for rotavirus in Guatemala. The mothers of San Marcos, Guatemala where I am working with our Grand Challenges Canada research project, know these two months as a time when their children suffer from a unique infectious form of diarrhea, but are aware of the cause or the how to prevent it.

Rotavirus, according to the World Health Organization, is the most common cause of diarrheal disease, especially in babies and young children in developing countries. It flourishes regardless of hygiene, sanitation or safe, clean water. A 2004 rotavirus epidemic in Guatemala infected over 24,000 people and caused the death of 140. And while I'm working to increase the effective treatment of diarrheal disease, it would be a huge impact to reduce the burden of cases caused by rotavirus -- preventing this type of diarrhea would make treatment of other types much easier. So far, there's only one control measure that has been successful in reducing the incidence of rotavirus: vaccination.

Vaccination, from when it was invented to protect against small pox in the 1700s to the present day, has been responsible for saving millions upon millions of lives and preventing debilitating illnesses. Great news out of India earlier this month declared that country polio-free; measles deaths in children have been drastically reduced over the past decade, from 542,000 in 2000 to 158,000 in 2011. We now have a safe and effective vaccine for rotavirus, and I'm hoping we can see this same success with preventing rotavirus-caused diarrhea, especially given the resilient and highly contagious nature of the virus.

When I was in Guatemala in May 2013, the country was preparing to undertake its first rotavirus campaign in San Marcos. In this high burden area, having children protected against even this one cause of diarrheal disease will keep them healthier, giving them more time to grown, learn and play; it gives their caregivers less to worry about and less need to take time away from work to bring their sick children to be treated for diarrhea, and it keeps children's immune systems stronger, because they aren't fighting off rotavirus and aren't weakened from the dehydration that comes with diarrhea. As rotavirus cannot be treated with antibiotics or other medications, rehydration is the only option, which in severe cases often require hospital stays and IV fluids to sustain the child while the disease runs its course.

The rotavirus vaccine definitely belongs in our collective anti-diarrhea toolkit, along with access to clean water and proper sanitation, access to health services, and, of course, access to life-saving treatment with zinc and oral rehydration salts for when children get sick. Governments are taking on the challenge of tackling diarrhea, working in partnership with MI, DefeatDD and other NGOs, UN agencies and civil society groups, to best reflect the needs of the country. Diarrhea may not be glamorous, but the rotavirus vaccine is a shining star in the public health world.