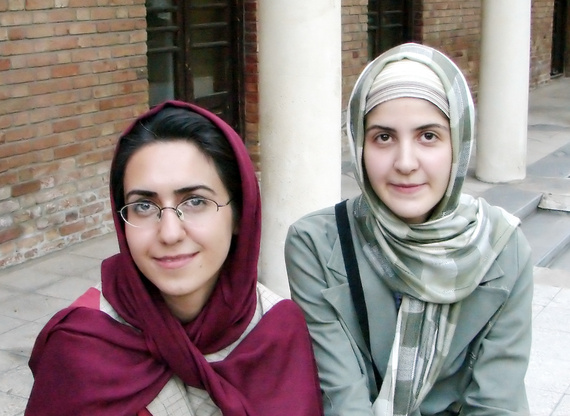 Hijab has been the topic of longstanding debates in both western and mainstream Islamic discourses alike. However, how productive are these arguments and the observations that stimulate them, if the focal point is consistently the outwardly appearance of hijab?

By focusing merely on a faith's visual aspect, we exclude much of the significance and spirituality that component contains. In a way, we appropriate the visual aspects of a faith to suit our arguments and comprehension of the world.

Much like how a millennial might appropriate the visual aspects of Hinduism by wearing a bindi to Coachella, many debate hijab without ever studying or realizing the meaning of what it is that they see, and how much of it cannot be seen.

Hijab is not a term that is synonymous with the headscarf; it is a term that encompasses much more than an article of clothing.

In the contexts of these arguments, hijab has been reduced to only one of its visual elements, which is commonly understood as a scarf upon a woman's head. Even in many Muslim societies, "hijab" is used colloquially to describe a head-cover.

However, hijab is not a term that is synonymous with the headscarf; it is a term that encompasses much more than an article of clothing.

Hijab refers to one's behavior, speech, countenance, and dress. It is a habitual practice that is applicable to both men and women. Not engaging in obnoxiousness, boisterous behavior, resisting flirtations, prolonged staring, and idleness with the opposite sex, and wearing clothes that conceal one's figure, and preserve one's beauty.

Hijab isn't something one wears; it is how one is. A person's hijab is one's modesty in its entirety. It is an Islamic code of conduct, respect for oneself and for one another.

When an integral part of the Islamic faith is reduced to only its appearance, it shuts the doors that lead to understanding, sophisticated dialogue, and -- eventually -- acceptance.

Deprived of its spirituality, intent, and divine service, the headscarf is nothing more than gilded towel on someone's head.

Far too often, one will observe a woman, raise their eyes to the scarf wrapped around her head and neck, and assume that someone else put it there. Whether it's part of a niqab or the dernier cri of Islamic fashion, the headscarf appears to be backwards, the symbol of a retrograde culture. The headscarf, and these assumptions, becomes the definition of hijab, and "modesty in Islam" cannot be stripped from thoughts of coercion, compulsion, and punishment.

Unfortunately, many Muslims, and especially women who identify as "hijabi," fuel these shallow-minded debates on the necessity and importance of hijab and the headscarf. By neglecting to open the discussion to the broader elements of hijab and Islamic practices, too many of the responses made by the Muslim community have given an equally narrow view of the hijab, and miss the point of providing a counterargument.

Muslim fashion blogs often seem to perpetuate the reliance on a graphic, material identity to those unfamiliar with Islamic theology and tradition. Other Muslim women promote their headscarves as a political statement. Others frame their whole identities around the piece of fabric.

By attributing our political views, personalities, and what otherwise may be construed as flaws or ultra-subjective qualities to the headscarf as a means of seeking validation, we fail to increase awareness of the greater meaning of hijab, and subjugate participants of hijab to more scrutiny by association.

Furthermore, defining hijab as only a headscarf alienates Muslim women who follow other modest practices outlined in hijab. Compromising hijab to conform to western ideals often leads to the general belief that other modest practices in Islam are unessential - societal ailments - and are then looked upon negatively by Muslims and non-Muslims alike.

By supporting the idea that the headscarf is the single facet of hijab, one actively disenfranchises Muslim men and women who are critical about their lifestyles and aim to live by the standards of modesty as outlined by the Qur'an and the ways of the Prophet (PBUH).

While one's way of participating in hijab and wearing the headscarf are completely subjective and unique to that person, these anecdotal experiences should not be used to describe the genesis of hijab in Islamic tradition, or why it continues to be so important to the faith.

This poor understanding and miscommunication of hijab makes it easier to justify discriminating against or banning the headscarf in some areas of the world.

Deprived of its spirituality, intent, and divine service, the headscarf is nothing more than gilded towel on someone's head. Without these crucial elements, the headscarf becomes inconsequential -- a target for removal.

As long as hijab is debated and derided on the basis of its immediate visual traits without understanding or explanation, then those who engage in these shallow discussions denigrate the meaning of the Muslim woman's appearance, disregard her intentions, and shut down the possibility of constructive conversations.