Throughout our 75-year history, a legacy that traces back to caring for displaced orphans after the second Sino-Japanese War, our focus at ChildFund International has been on improving the lives of countless children throughout the developing world. But helping provide for the needs of these children starts elsewhere: With ensuring that those most responsible for their wellbeing are themselves healthy and strong. It starts with the mothers. 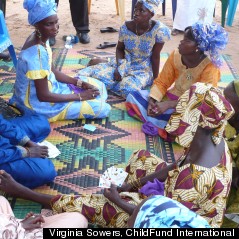 Senegalese women play a game that provides health education tips on pregnancy and wellness at a ChildFund community-based health hut funded by USAID.

Toward the first goal, encouraging progress has been made. In the two decades since 1990, the deaths of mothers resulting from complications of childbirth were cut almost in half - by 47 percent. In Eastern and Southern Asia and in Northern Africa, the news has been even better: a two-third decline in maternal mortality. Even so, in 2010 there were an estimated 287,000 maternal deaths worldwide, a mortality rate that is 15 times higher in developing countries than the rest of the world.

That sobering reality has much to do with the second goal - improving access to reproductive health. In all, more than 50 million babies worldwide are born without skilled medical care. While more women are receiving prenatal care - up by almost 20 percent since 1990 - only one out of every two women in developing countries are getting proper levels of health care. If progress is to continue, we must enhance access to care, especially for women in rural areas who often live long distances from the nearest medical facility or professional healthcare worker. Poor roads and a lack of regular transportation compound the situation.

One obvious solution to this challenge is to increase the number of medical facilities that are available to women in the developing world. It's a strategy that is already paying dividends. In Senegal, for example, ChildFund International has been working on building a network of health huts and outreach sites throughout the country.

Funded through USAID and involving partners from Africare, Catholic Relief Services, Plan International, World Vision, Enda Sante and Enda Graf Sahel, the first phase of these efforts has focused on reducing the country's high maternal mortality rate: 401 per 100,000 live births. Senegal has significant deficiencies in its healthcare infrastructure and equipment, and the country has fewer than 850 physicians, with more than half of them practicing in the capital city of Dakar.

The renovation and staffing of hundreds of health huts and outreach sites have put medical care closer to the women who need it most. In phase one of the initiative, some 1,620 health huts and 703 outreach sites were put in place, serving more than 3 million Senegalese. The onset of phase two will add another 531 health huts and 1,014 outreach sites, which from a geographic standpoint, would virtually blanket the entire country - 14 of 15 regions and 71 separate districts.

Refurbishing and equipping these facilities, however, is only part of the solution. Instilling a sense of local ownership in them is just as vital if they are to become sustainable. Integrating the health huts into the government's National Health Development Plan has provided an important endorsement from a national perspective, but transferring the management of the health huts and outreach sites to local community groups will be a critical component to their ultimate success.

And so is their acceptance by the women themselves. Medical facilities within many developing countries have suffered in the past from a reputation of not being as solicitous and caring for their patients as we in developed countries have come to expect. Part of our work in transferring management to local personnel is not only assisting with their training but also establishing best practices and monitoring their adoption by the healthcare staff.

The introduction of health post nurses will be an integral part of the second phase of this initiative. These nurses will assume leadership roles within the facilities as well as serve as important liaisons with community groups and key influencers. Among these key influencers are traditional birth attendants, many of whom are threatened by this new paradigm as it reduces the need for their services. Educating women about the professional care available, emphasizing the importance of nutrition and other healthy behaviors during pregnancy and identifying high-risk pregnancies prior to delivery are all critically important factors in reducing maternal mortality.

We understand all too well, however, that despite these best efforts, there will always be unpredictable complications with some deliveries. It is a sad reality, made all the more so by the tragic consequences for so many mothers. Their premature deaths, at a time when there should be great joy and celebration over the arrival of new life, should remind us of how much more there is to do in providing every mother with the kind of care that gives them the best chance to be there for the children who need them most.