San Francisco is nothing if not a splendidly cinematic city. From the rolling hills and bay vistas to the brightly colored Victorians, generations of filmmakers have taken to San Francisco to film everything from legendary film noir to Robin Williams wearing a dress.

While the city itself remains iconic, decades of urban development have often made picking out specific locations difficult. That's where ReelSF comes in. It's a website dedicated to finding spots depicted in famous San Francisco-set films and showing what those very same places look like now.

"I saw the 70 mm remastered version of Hitchcock's 'Vertigo' twelve years ago and recognized Jimmy Stewart's character's house as being nearby," ReelSF founder Brian Hollins told the Huffington Post, recalling what sparked him to create the site in the first place. "I went to see it and found it to be much as it looked in 1958. I stood there and had a time-warp moment as I imagined Kim Novak and Jimmy Stewart acting out their scene on the porch with Hitchcock sitting behind the camera across the street."

Hollins created a book of "then and now" shots from the film, which he eventually got signed by Novak, and then started a blog doing the same for a host of other "classic, location-rich San Francisco movies."

Hollins, who lists "Vertigo," "Dark Passage" and "The Lineup" as his favorite San Francisco flicks, notes he frequently comes across movie locations that some fifty years of development have rendered virtually unrecognizable today.

For example, much of Jules Dassin's 1949 capitalist critique "Thieves Highway" took place at the old Produce Market downtown. The area was later completely transformed by the Golden Gateway Redevelopment Project in the 1960s.

Got a favorite SF film? Let us know in the comments. 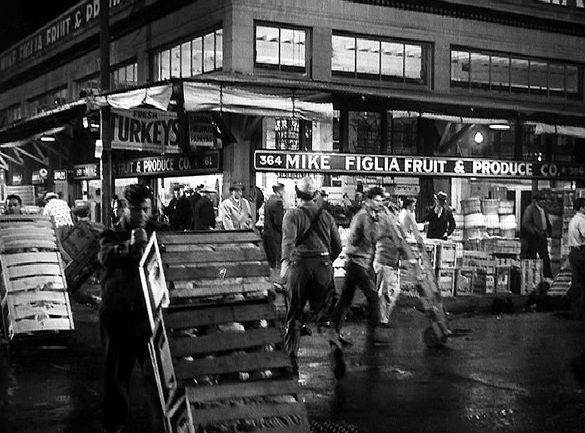 1 / 8
Theives' Highway - Then
"After driving through the night with his truckload of apples, a very tired Nick arrives at the market and seeks out Mike Figlia at his corner business, at the southeast corner of the Washington and Davis intersection, <a href="http://reelsf.com/thieves-highway-mike-figlia-fruit-produce-co" target="_blank">the center of activities of San Francisco's Produce Market</a>."
CitySleuth