We hear a lot in the news about America losing its competitive edge. With the private sector focusing myopically on short-term profits and Congress staggering along as usual, there seems to be no way out. In the past, our nation's academic research powerhouse spawned new industries that reignited our economy in times of contraction -- personal computers, fiberoptic communications, and the biotechnology industry are all prime examples. University researchers are as inventive and productive as ever. But as investors became increasingly risk-averse over the past few decades, a "valley of death" formed that swallows up promising technologies before they are mature enough to attract the financing they require for successful commercialization.

But there is hope. Quietly, under the radar, universities across the nation are beginning to test out new models for academic research that both support innovation and accelerate translation of these technologies into the marketplace. Stanford's Biodesign program, the California Institute for Quantitative Biosciences (QB3), and Harvard's Wyss Institute for Biologically Inspired Engineering that I head, are three examples, but others are beginning to self assemble as well.

Government-funded research generally only supports discovery, technology development, and early proof-of-concept studies. An effective path to commercialization, however, requires creating a broad intellectual property portfolio, appreciating the commercial landscape, and considering costs and other factors that currently do not fall within the expertise of academic researchers. The answer, we believe, is to bring people with industrial expertise and entrepreneurial experience, along with their tools and approaches, directly into the academic environment to create an entirely new model for innovation, collaboration and technology translation.

At the Wyss Institute, we hired over forty scientists and engineers with extensive industrial experience in product development, and integrated them into teams composed of faculty, fellows, students and staff. Working together at the bench, they have transformed recent discoveries in biology into engineering innovations that have the potential to transform healthcare and the environment. But we don't stop there. For our most advanced and promising technologies, we recruit entrepreneurs to team up with the faculty inventors and technology leads to form translation teams. These 'entrepreneurs-in-residence' reach out to potential investors and industrial partners to discover where obstacles lie, and working with other team members, they map out a path through the valley of death that we are confident will bridge to the other side.

The Institute's Human Organ-on-a-Chip technology provides an outstanding example of how de-risking technologies technically and commercially in the academic setting can accelerate their translation. In 2010, we published a paper in Science showing how computer microchip manufacturing techniques can be used to create cell culture devices containing tiny hollow channels lined by human cells that recapitulate not just tissue structures, but also the fluid flow, breathing motions, organ-level functions, and diseases of the living human lung. The Lung-on-a-Chip garnered immediate worldwide attention because of its potential value as a replacement for animals in the testing of drugs and toxins. With internal support from the Wyss Institute, translation-focused funding from DARPA, FDA and NIH, and the passionate efforts of our staff, we advanced this technology in less than four years to the point where we now have more than ten different human organ chips in development, including liver, kidney, gut, bone marrow, and skin. We have also created an automated platform that operates and analyzes these organ chips, and even integrates them by flowing liquid medium between their shared vascular channels, creating what is effectively a 'Human Body-on-Chips'. To accomplish this, we had to reach out to commercial experts in materials and mass manufacturing to devise strategies for chip production, and we needed to collaborate with pharmaceutical and cosmetic companies to ensure that these devices are designed precisely to meet their market needs. 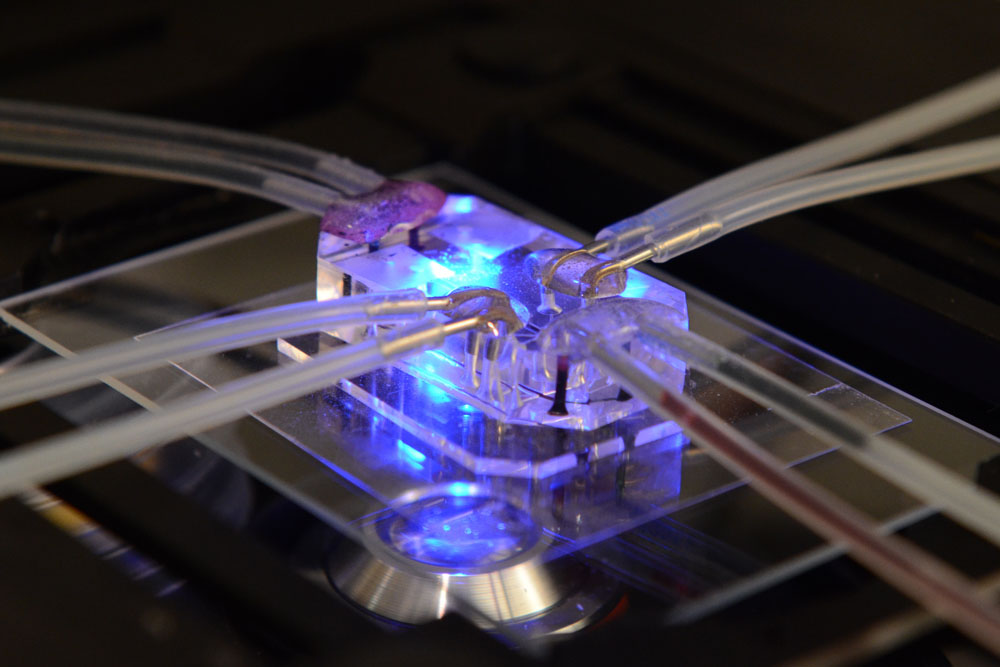 On July 28th, we announced that the Wyss' automated Organ-on-a-Chip platform will be commercialized by a newly formed private company where it will be used to accelerate development of pharmaceutical, chemical, cosmetic, and personalized medicine products. This follows a worldwide license agreement between Harvard's Office of Technology Development and the start-up.

Survival in a competitive environment requires constant adaptation and America's place as a world leader in innovation is no exception. Until recently that preeminence depended on a kind of division of labor between government (funding basic research) and the venture capital community (funding translation). Unfortunately, those days are over. Interestingly, some of the greatest technical innovations of the last century were birthed in the Menlo Park laboratory of Thomas Edison, a 'tinkerer' who brought together talented craftsmen, chemists and engineers outside of academia. Some of the innovations that ensured our victory in World War II, including the development of RADAR, were similarly made possible by Alfred Lee Loomis, a Wall Street tycoon who used his personal wealth to bring leading researchers from across the nation to his home research laboratory at Tuxedo Park. And so perhaps it is not surprising that the Wyss Institute, Broad Institute, Allen Brain Institute, Koch Institute and many other emerging centers of innovation were all made possible by a new generation of 'entrepreneurial philanthropists'. Not unlike Loomis, these donors want to bring about rapid positive change, and they realize that it is often impossible to accomplish this goal working within existing organizational structures or with government funding alone.

So there is hope. But we still need government to fund the basic research that drives the discovery pipeline, which in turn fuels industry and institutes such as my own. We also need more visionary philanthropists who will support and inspire universities to experiment with new ways of doing science so that even more versatile and effective translation models emerge. In the end, industry and commercial investors will need to embrace these new models as well. Only then will America's innovation engine roar once again.