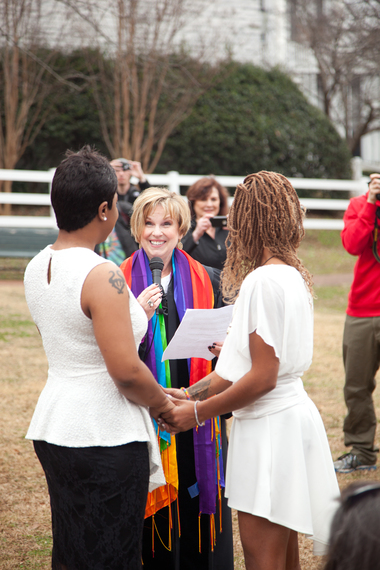 Photo Courtesy Steve Babin
People ask me, "What was your thought process in deciding to officiate at the wedding of a same-sex couple?" My amused answer: "I didn't have a thought process. I just said 'yes' to the invitation."

My ministry primarily consists of advocating for the civil and human rights of illegal immigrants as well as "guest workers" who are in the US legally with a visa. My interest in LGBTQ issues usually happens where they intersect with immigration issues. For example, I am concerned about the particular needs of transgendered people seeking humanitarian aid, such as shelter in Mexico, when they cross borders illegally.

For several years the staff at my church and I have been discussing how we as a church will respond when one of our gay young adults asks to have a wedding in our sanctuary. Once, I suggested we should not be taking money from Chick-Fil-A because of President Dan Cathy's politics.

That was about the extent of my active involvement with LGBTQ issues until I accepted the invitation to officiate at the wedding of Yashinari Effinger and Adrian Thomas in Huntsville, Alabama. The women are Baptists and wanted a Baptist minister to perform the ceremony. Held in Huntsvile's Big Spring Park, it was the first same-sex wedding in Madison County and took place the day the ban was overturned in Alabama.

Although I had not been a strong ally, there are reasons why a straight, (formerly) Southern Baptist minister would officiate at a same-sex wedding. I say "formerly" because the day after I officiated at Effinger and Thomas's wedding, the Madison Baptist Association, through which Weatherly Heights Baptist Church was affiliated with the Southern Baptist Convention [SBC], began proceedings which ended in our church being "disfellowshipped".

As I reflect on why my "yes" answer came so easily, it occurs to me that the basic reasons are two. First, my parents were Civil Rights Movement activists in the Deep South in the 1960s. They were outspoken opponents of segregation. I knew my family was right, but to be "out" as an integrationist was to risk the social death which lurked around every corner.

I recall, for example, November 22, 1963. I was taking a math test when someone on the intercom told us President John F. Kennedy has been assassinated. My class mates erupted in elated, foot-stomping cheers -- "the nigger-lover is dead!" I remember thinking, "If they knew who I was would they wish me dead, too?"

Being in something of a closet throughout my teenaged years contributed to my empathy for others who cannot reveal who they are. I don't mean to draw an exact parallel, but the closet I experienced was lonely and suffocating. No one should have to live there.

At that time, I could not imagine that segregation would ever end. Although the waters were stirring, from my perspective on that day there seemed to be no reason to hope.

The second reason my "yes" answer came so easily, I think, has to do with my orientation as a Christian "liberation theologian". I have been influenced by Brazil's Leonardo Boff, a Roman Catholic Franciscan, and Nicaragua's Ernesto Cardenal, A Roman Catholic priest, among others.

Latin America's liberation theologians perceive a need to create conditions that would offer hope. It has earned them a reputation for radicalness. Cardenal, for example, gained notoriety in the 1970s when he abandoned the principle of Christian non-violence (this links to an article I published about that). Openly supporting the Sandinista guerrillas, he joined them at the front, reading the Bible to encourage them in their effort to overthrow the brutal Somoza military dictatorship. He offered the guerrillas hope.

Among other things, Boff offered hope to Brazil when he published Nunca Mais [Never Again]. It reported the findings of an American Presbyterian minister, Jaime Wright. Wanting to settle accounts with those who tortured and "disappeared" his brother, at great personal risk Wright photocopied the records kept by the military dictatorship. Brazil's military personnel had meticulously detailed their torture of thousands of presumed threats to Brazil's national security state. By revealing horrendous truths, Wright and Boff offered Brazilians hope.

Cardenal, Boff, and other Latin American liberationists paid for their actions. When Pope John Paul II visited Nicaragua, he brought Cardenal to tears by publicly wagging his finger at Cardenal as though he were a disobedient child. In response, the women of Managua shouted at the Pope to "talk to us about our disappeared children!" The Pope responded, "Silencio! [Silence!]"

The Vatican, led by Cardinal Joseph Ratzinger, forbade Boff to publish or speak for a period of years. All around the world, there was protests against the silencing of Boff, whose stature in Brazil was equal to that of Pele, the soccer player.

I cannot pretend to have done anything to equal the actions of Cardenal and Boff when I became the first Southern Baptist to officiate at a same-sex wedding. I can say, however, that one of the surprises for me was the emotional response of so many to my presence in Big Spring Park. They were not responding to me personally - they didn't know me. They were responding to a representative of the church which had hurt them so badly. If I was able to offer them just a little hope, then being disfellowshipped will have been worth it.

Rev. Dr. Ellin Jimmerson is an ordained Baptist minister in Huntsville, Alabama, has a Ph.D. In 20th century US history and a Masters of Theological Studies with a concentration in Latin American liberation theology. She is the writer and director of the award-winning migrant justice documentary, The Second Cooler, narrated by Martin Sheen. You can follow her on Twitter @EllinJimmerson, on her blog, and on Facebook at The Second Cooler Fan Page.