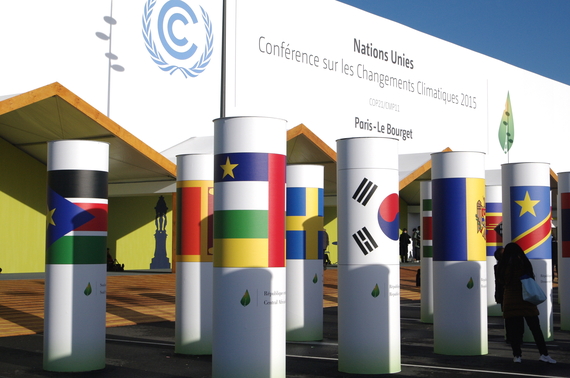 We are experiencing an extended stretch of unusually mild weather here in eastern Pennsylvania. How much of this is due to a strong El Niño as opposed to being a symptom of climate disruption is not known. Regardless, we do know that 2015 is on track to be the warmest year since humans began recording temperatures, and global temperatures will soon reach the benchmark of 1º C above preindustrial levels. Against this backdrop, on December 12th, almost two hundred nations unanimously committed to greenhouse gas emissions reductions aimed at keeping total warming "to well below 2°C above preindustrial levels." Despite two decades of climate negotiations, such consensus has not been previously achieved, and never before has the need to deal with climate change seemed so urgent.

I recently returned from the United Nations climate negotiations in Paris - my seventh COP meeting in as many years. Over the years, I have witnessed international disappointment when negotiations repeatedly failed. Despite growing frustration and cynicism, attempts to tackle this most pressing and complex issue have continued. The emotional ups and downs this year have been great - beginning with unparalleled optimism after the approval of the post-2015 Sustainable Development Goals, the release of the Pope's Encyclical, and the U.N. Climate Summit in September. This enthusiasm was diminished, however, by the terrorist attacks in Paris that left many of us wondering whether COP21 would still occur. Perhaps it was this juxtaposition of terrorism and recent weather extremes that led to COP21 opening with the largest gathering of world leaders in history - all pledging to take on the formidable challenge of climate change.

There will be much analysis and criticism of the 31-page Paris Agreement. Already, activists and scientists from around the world have pointed out that the pledges are insufficient to protect the most vulnerable people or to reverse the trend of rapidly declining biodiversity. Indeed, the 188 national commitments received to-date for reducing greenhouse gas emissions will not limit global warming to 2ºC, and the commitments are non-binding. However, the Parties to the Agreement acknowledge this and have pledged to work on more ambitious goals over the next few years. As with any negotiations, this deal is a compromise - attempting to balance costs, benefits and risks, along with politics. It is far from perfect, but it is an important leap forward, especially considering that the document had almost 1000 sections of bracketed text (areas of disagreement) just one week ago.

Language indicating that the world will be fossil fuel-free is missing, but many oil-rich nations would never have accepted such wording. Yet, as noted by Secretary of State, John Kerry, the Agreement does send a strong signal to the business community and financial markets that we are moving to a low-carbon, renewable energy future. Fossil fuels still make up about 80 percent of the world's energy mix; according to Bloomberg New Energy Finance, the combined stock value of the world's coal, oil and gas companies is about $5 trillion. The barriers to transforming to a low-carbon future are substantial.

At COP21, I heard about many new developments in energy storage and transmission for solar and wind energy and breakthroughs in carbon capture and sequestration technologies. Most of this innovation was not coming from our country. Some healthy global competition might revitalize U.S. support for science and technology, and perhaps a redirecting of U.S. subsidies to fossil-fuel companies to better uses.

Many are expressing disdain for the behind-the-scenes politicking used to reach an outcome that could be accepted by the U.S. Given that we still have one of the large carbon footprints per capita of any country, the U.S. has to be a signatory to this agreement. There is also strong criticism that the Agreement does not provide a basis for any liability or compensation which essentially allows past polluters, like the U.S., off the hook. But there was much talk in Paris about new models for insurance and financial plans to deal with the loss and damage of extreme weather events, coastal erosion, climate refugees, and other impacts of climate change. We can continue to bicker about the past, or we can get on with the business of helping countries adapt to the inevitable changes of climate change, share technology to help them leapfrog past dirty energy options, and work together to build capacity and resilience for vulnerable communities and people.

Finally, there have been many complaints over the past few weeks that the youth voice was silenced in Paris, in part due to security measures imposed by the French government. However, I don't recall ever hearing so much focus on the youth and future generations at the conference - especially from the world leaders. Registered civil society groups representing a wide range of perspectives, including indigenous rights, least-developed nations, farmers, mayors, the business community, researchers, trade unions, women and gender, and youth, all had significant access to the negotiations and there were regular meetings with the high-level staff of the COP21 Presidency. And the Agreement clearly acknowledges the "Parties obligations on human rights" - a major victory.

Civil society can complain and consider this Agreement as a betrayal, or it can celebrate this as a major step forward and work with scientists to continue to educate the public about the seriousness of climate change and to be relentless advocates for even stronger climate action at the local, national, and global levels. I prefer the latter approach.