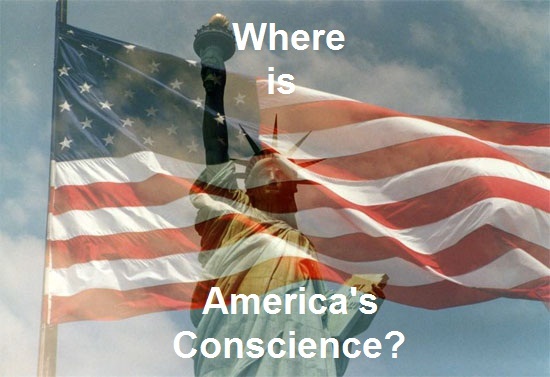 It's 4th of July weekend and I'm in my backyard. I grill hot dogs and hamburgers while my girls are in the small pool we set up for them wearing their brand new, Fourth-of-July-themed stars and stripes bathing suits purchased at the insistence by my 8-year-old.

While my family and I enjoy the privilege of a semi-suburban life, one that we earned via education and hard work, I wonder what it would take for me to save hundreds of dollars and willfully pay a total stranger to take them thousands of miles away, alone, to another country with the high probability of never seeing them again. It would have to be something unimaginatively dire. They would have to be in clear and immediate danger, a danger that, even if I gave up my life to protect them, would still end taking their innocent lives.

I can imagine very few scenarios where this could be a possibility. Few Americans can. We live in a country where we generally trust our military and law enforcement to protect us. We are generally comfortable that crimes are punished, criminals are generally caught and removed from society, and property is generally protected. There is little fear for most of America that a band of thugs could enter our homes and kill our families without there being widespread (or at least localized) condemnation and calls for justice. Our lives matter here.

Then again, we don't live in Central America, and in our first world privilege, we cannot fathom the tortuous decision families are making by the hundreds to send their children, some younger than my 8-year-old daughter, North through wilderness and desert, through war zones and drug cartel controlled areas, for a chance at -- not a better life, but life in its most basic form.

The violence these children are trying to escape is well-documented. The Pew Research Center describes how gangs are terrorizing the populace and killing thousands at will. Honduras continues to be the murder capital of the world.

This violence is a direct result of American intervention over that last century. Remember the Iran-Contra scandal? Well, the "Contra" part is little discussed, but it is part of a pattern of direct and violent intervention in the very countries these children are coming from.

Economics plays a part in this plight, but being "poor" would not motivate a family to send their children into the world alone. It would have to be starvation-level poverty. Risks of starvation, mixed with real threats of violence, and compounded by the failed states of Central America which are infected with corruption and graft, and you have an apocalyptic situation we as Americans can only imagine in our Hollywood movies and works of fiction. A brief glimpse into their lives below does not do justice to the reality they are face every day.

These children are not immigrants, legal or otherwise. They are refugees. And when we see this exodus of child refugees, our country has a choice -- do we try to save lives, or do we callously reject their pleas for help, and send them back to the hell they are attempting to flee? America has done this before to tragic consequences. In 1939, families trying to spare their children from the oncoming Nazi onslaught sent their kids via boat to the Americas in the hopes of saving their lives. America rejected them. Supposed defenders of freedom stuck to thinly veiled xenophobic and anti-Semitic arguments to overpower a weak and cowardly political class, who rather than lead our nation, chose to be bystanders of this tragedy and sent this boatload of children back to Europe, where hundreds died at the hands of the Third Reich.

America did this. America, the country that is the light of the world and the protector of freedom globally. Now America has an international crisis equal to that, not from some far off country across the ocean, but right at its doorstep. We have a choice -- do we show the world that we indeed stand for "life, liberty and the pursuit of happiness," or do those words ring hollow for children from places America has no vested interest in? Shall we knowingly send hundreds of children to their deaths, kids who pose no threat to us or our nation, who are simply asking for a chance at life? Or shall we repeat the horrendous decision we made in 1939, and add another stain on the American conscious?

When I see what happened at Murrieta, and how conservative media target these innocent children with their vitriol, hate, and their thinly veiled xenophobia and racism, I wonder if they truly understand what it is to be an American, what it means to know and understand the freedoms we take for granted. I also wonder if they are capable of empathy, the quality that makes a grand society. When I see our political class of both parties be weak and cowardly, and chose to be bystanders while a crisis looms, I can see no other parallel than to those tragic days of 1939.

I turn back to my daughters, proud to be in their stars and stripes and delighted to be celebrating the 4th of July weekend -- safe and secure. Little do they understand that they are simply lucky to have been born on the right side of a manmade border. I thank God I may never have to make a decision similar to the one the parents of these child refugees have had to make, simply to save their innocent lives. And while I wonder where the conscience of this great country has gone, I am reminded of the words written below our Statue of Liberty, a symbol we hold dear during this day celebration:

Keep, ancient lands, your storied pomp!" cries she
With silent lips. "Give me your tired, your poor,
Your huddled masses yearning to breathe free,
The wretched refuse of your teeming shore.
Send these, the homeless, tempest-tost to me,
I lift my lamp beside the golden door!

The world is watching to see if America still remembers these words, and to see if we as a nation, still have a conscience.