The 31st annual Sundance Film Festival wrapped on February 1 in Park City, Utah. Sundance remains one of the most competitive film festivals in the world, with only 1.5% of films accepted of the 12,166 submitted.

Latino voices were modestly represented at the festival this year, while critics observed the festival program to have been "particularly refreshing" in its diversity. The line-up featured over a dozen feature films with some presence of Latino themes. Recognizable Latino talent like Jennifer Lopez starred in the dramatic feature Lila & Eve, but there was also the exciting breakout of a few up-and-comers, such as Kitana Kiki Rodriguez (Tangerine).

What Sundance 2015 illustrated is that both nationally and internationally, Latino themes are not only for Latino filmmakers to explore; rather, Latino filmmakers are increasingly sharing universally relevant and commercially marketable themes in their movies. Additionally, Latino-themed stories are being told by filmmakers of all ethnic backgrounds. Such trends were proven by the winning Me & Earl & the Dying Girl by filmmaker Alfonso Gomez-Rejon, ever-successful writer/director Rodrigo Garcia's Ewan McGregor-starrer Last Days in the Desert and the Spanish-language short film Making it in America by Joris Debeij.

As the 2015 festival came to a close, select Sundance filmmakers reflected upon their Latino-themed films:

S.J. Main: How has your Latino background affected your way of telling stories through cinema? 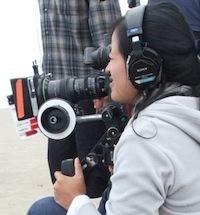 Tania Castillo: I was born and raised in Mexico City. My parents come from a small town in the state of Puebla. I have grown up witnessing and being part of a society where life is rough and people have beautiful, passionate feelings. Primavera shows the context of my society, the absence of parents because of full-time jobs, the teenager friends I had, the Latin music I love. Primavera is based on a personal story. The memory of my sister teaching me how to dance "cumbia" was a moment that marked me, and that's the scene from where the idea began.

Tania Castillo is presently completing her filmmaking degree at the Centro de Capacitación Cinematográfica in Mexico. Filmed on location in Tuxpan, Veracruz, México.

Stop by Writer/Director Reinaldo Marcus Green
World Premiere in Shorts category
Logline: A young man's livelihood is put to the test when he is stopped by the police on his way home.

S.J. Main: How did the story for Stop originate?

Reinaldo Marcus Green: The idea came quite organically. I grew up in New York City, where people of color are subjected to profiling on a daily basis. These issues are not unique to NY, they are happening all the time, all over the country and many parts of the world. It was a combination of things, a compounding of events that started stirring the pot for the story. I asked myself the question, "What would happen to me if I was walking home at night and got stopped by the police?" And then I started to write it out, beat by beat.

S.J. Main: Would you say your ethnicity affects the stories you choose to tell as a filmmaker, and how? 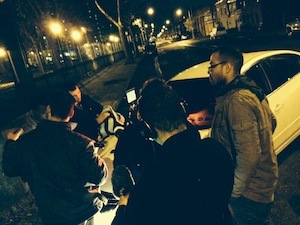 Reinaldo Marcus Green: I am half Puerto Rican and half African American. We write what we know and we write who we are and where we came from, and inevitably, that is ingrained in the fabric of the types of films we make. I wanted to tackle a very controversial issue in a non-didactic way to allow viewers to think for themselves. I wanted to start a conversation, leave the audience with an emotional feeling, and create dialogue around the issue.

Stop is Reinaldo Marcus Green's first film at Sundance. He is a student at NYU's Tisch School of the Arts. Filmed on location in Red Hook, Brooklyn.

S.J. Main: As you yourself are not Latino, how did you come to connect with Latinos or Latino themes through the production of the film Cartel Land? 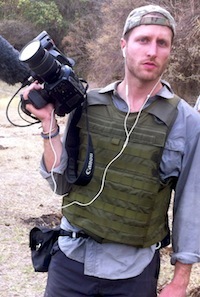 Matthew Heineman: This film was a particularly immersive film, especially with the storyline of the Mexican vigilantes in Michoacán fighting back against the villainous Knights Templar Cartel. I have very complex feelings about the experience because...I fell in love with the people and landscape of Michoacán. But, on the other hand, I was there to document the lawlessness and the perpetual cycle of violence. I wanted to tell [the stories of everyday citizens] from an intimate, yet action-driven verité perspective. It took many months to gain their trust and to gain the access that I needed to tell this story.

S.J. Main: How does the story of the film manage to illuminate a significant issue that affects Latinos?

Matthew Heineman: I think it's tragic how the drug wars in Mexico have affected everyday citizens. It's estimated that over 80,000 people have been killed since 2007 and 20,000+ missing. ... I believe that the killing of the 43 students in Ayotzinapa highlighted--on the global scale--how deeply corrupt Mexico is and how blurry the lines are between cartel, government, and law enforcement. I think Cartel Land plays on those themes in a deeply personal and surprising way, and offers a unique perspective.

Matthew Heineman also directed Escape Fire: The Fight to Rescue American Healthcare, which premiered at Sundance in 2012. Filmed on location in Arizona, USA and Michoacán, Mexico.

Liveforever (Que Viva la Música) by Writer/Director Carlos Moreno
World Premiere in New Frontier category
Logline: Driven by the music and dancing that she finds along the way, a teenager leaves home willing to try everything that her provocative and tolerant city has to offer, no matter if she burns out in the process.

S.J. Main: How would you say that your movie represents Latinos uniquely, as maybe they haven't been portrayed before on film?

Carlos Moreno: This might be the first time we see a character searching for [her] identity in music and dancing, specifically from rock music to salsa music. [I]n Latin America, young people tend to discard their local music and rhythm in preference for American or European music. It's a way to fit into the global trends. But as adolescence kicks in, parties and sexuality flourish, that body contact, the sensuality of our Latin music and dancing take over. 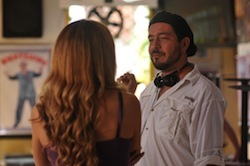 [As filmmakers], we have lived our character's journey, we know the streets, the dance floors, we have found ourselves in this story...Latin culture is the essence of what the film is about.

The Royal Road by Writer/Director Jenni Olson
World Premiere in New Frontier category
Logline: A cinematic essay set against a contemplative backdrop of 16mm urban California landscapes, The Royal Road offers up intimate reflections on nostalgia, the pursuit of unavailable women, butch identity and Alfred Hitchcock's Vertigo alongside a primer on the Spanish colonization of California and the Mexican American War.

S.J. Main: How does your film explore Latino themes?

Jenni Olson: I'm not a Latino filmmaker but my film...reflects in part on Junipero Serra and his Spanish colonization of California and the history of the Mexican American War as a war that was, as Ulysses S. Grant said, "one of the most unjust ever waged by a stronger against a weaker nation." 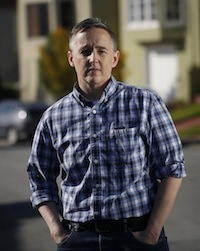 As a white person living in California, one can't help but be aware of our state's heritage--Latino, Spanish, Native American. My film makes an effort at exploring a tiny bit of this story using our famous thoroughfare of El Camino Real as a structuring device...[T]his past also connects us to our future. In 2065, Latinos are projected to hit the 50% mark at which point they will reach a majority for the first time since the year of California's statehood in 1850.