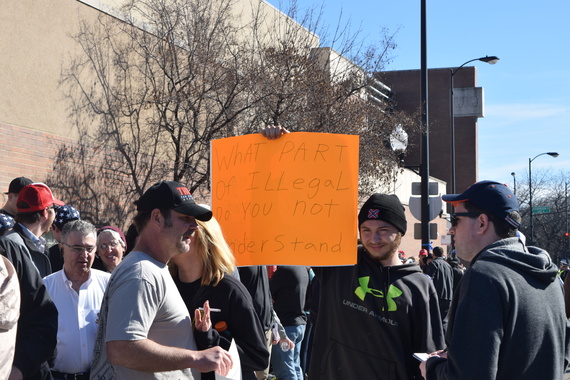 A few minutes after it was announced that Donald Trump would hold a Chicago rally on March 11 at UIC Pavilion, someone created a Facebook page titled Trump Rally Protest-Chicago which amassed thousands of RSVPs within hours.

As a proud progressive, I added my name to the RSVP list because I had to stand against Trump's divisiveness and tweeted: ".@realDonaldTrump is going to regret coming to Chicago. #ShutItDown #shuttrumpdown." I was optimistic that Chicago students, activists, organizers as well as unions would mobilize to disrupt and quite possibly shut down the rally.

When it comes to activism and politics Chicago is a special place. This city's protesters have a reputation of taking to the streets and disrupting things in the name of social justice.

In 2003, 15,000 people shut down Lake Shore Drive for hours to protest the start of the war in Iraq. A May Day action in 2006 saw 300,000 people flood downtown streets in the name of immigrant rights. This past November several hundred protesters successfully blocked entrances to stores on the Magnificent Mile on Black Friday to protest the killing of Laquan McDonald who was fatally shot by a Chicago Police officer Jason Van Dyke.

When a Chicago student, studying at New York University, created a virtual resignation party for embattled mayor Rahm Emanuel and Cook Country state's attorney Anita Alvarez, it evolved from a fake Facebook event to a real protest that saw hundreds of Chicagoans marching through the streets and halting traffic for hours on December 9, 2015.

I was outside the entire time for the rally-that-didn't-happen and it was a remarkable spectacle.

By 2:30 p.m., the line of ticket holders to get in snaked around two sides of the Pavilion. A bearded young man in a black skull cap with a Confederate flag emblem held up a sign that read, "What part of illegal do you not understand." The line was overwhelmingly white, all ages and evenly split between men and women. Many carried signs or wore apparel that was pro-Trump or featured politically provocative messages. 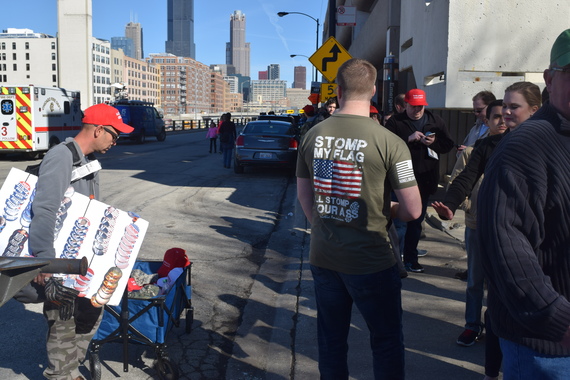 Diverse groups of young adults were dispersed throughout the line, including a young lady in a hijab, sunglasses and a "Free Palestine" T-shirt who stood with a group that included two men who had keffiyehs draped over their shoulders.

On another side of the building, ticket holders waited to get in while a small group of protesters assembled across the street. A female ticket holder held up a sign that read "Not racists" as folks next to her yelled racist epithets to the protestors who were chanting "Racist! Racist!"

At 4:45 p.m., a multicultural group of thousands of University of Illinois at Chicago students and faculty and other Chicagoans descended on the Pavilion to join the protesters. Poet and Chicago organizer Ethos lead the gathering and informed us that there were more than 100 protesters already inside the rally, which we would later learn was more like several hundred.

"No Trump. No KKK. No fascists in the USA," we chanted as we marched down the street towards the Pavilion. Overhead, police choppers monitored the crowds and in the distance, media choppers broadcast the street action.

I joined the throng of protesters positioned across the street from the Pavilion and in the intersection. Another group of protesters assembled next to the main entrance with only bike racks separating them from those in line waiting to get in. The main entrance of the Pavilion was blocked off by more bike racks. Police officers, including many on horseback, stood between the two groups and the entrance.

Around 6:30 p.m., we noticed that red shirted Pavilion ushers rushed into the building and locked the doors. Now, protesters moved to the main entrance. We knew something was up.

As folks chanted "Shut it down, shut it down," I called a news reporter inside the venue who told me the rally was cancelled. Others were getting word too and a protester on a loud speaker confirmed the rally was shut down.

A collective cheer arose. The mood was festive. A short while later, as I walked to catch my train home, I saw rally attendees leaving too. There was a lot of tension among protesters and supporters who mingled as they headed to the parking lot and public transportation.

I heard shouting matches and racial slurs. Some protesters took to briefly blocking parking garage exits and even the expressway.

As I waited for my train, I thought of a chant that we didn't use during the protest, one that was made popular by protesters during the 1968 Democratic Convention: "The whole world is watching."

Trump came to town to peddle bigotry, incite violence and make a mockery of our political system. As Chicagoans, we had to do something. The thousands of protesters sent the message that Chicago would not tolerate his divisiveness. It seemed like the right thing to do, after all the whole world was watching.