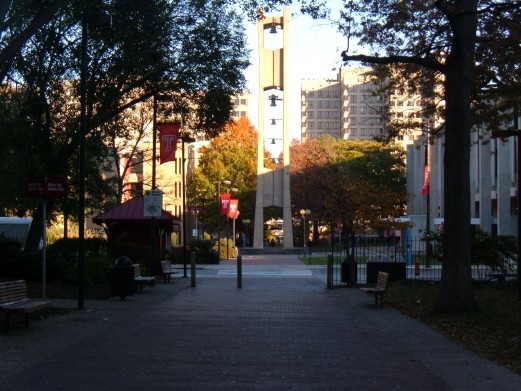 Even though it happened just a few months ago, graduation for me was almost a complete blur. I do not remember much of what was said to me on that day except the word "congratulations." That word was repeated a lot, especially by those who saw me walking to school wearing my cap and gown.

I remember arriving somewhat early to the ceremony, so early that there were not too many graduates in attendance yet. The final touches were still being taken care of and I was told to simply wait. Later, as the ceremony began and I sat amongst my graduating peers and scrolled through my phone, I could not help but think of how far I had come.

It had been a rough couple of years.

There was still one class that I needed to complete for my major. The class was statistics, and it would start the following week and continue for five more additional weeks. It was a headache at times, but to know that I would soon complete what I set out to do just a few years ago when I started at the Community College of Philadelphia was all the motivation needed.

And yet there were times when I was unsure of myself, times I could not help but wonder if I had come so far just to fail. Week after week I would calculate my grade to see where I stood in the class and at times visit my professor during office hours to ask about a specific question relating to an upcoming or passed assignment. I was so close to obtaining my long awaited degree and I did not want to disappoint myself, my friends or family.

Even though I was being allowed to walk I would not be receiving my actual degree until October, not June like all of my peers. Even though there were others in somewhat similar position such as me and I was not alone, there were times when I felt like I was.

Yes, there were a few hiccups along they way while attending both schools, but that should have been expected on my part. For example, upon my arrival at CCP I enrolled in their dual admissions program but after I submitted my application, and received no response from Temple or CCP, I began to worry. And with that feeling, I became discouraged. It took months, and I am not exaggerating, until I finally received some type of notification from CCP that I was in the program. And after that, Temple followed.

Immediately after graduating from CCP I went straight to Temple, and the transition from one school to the next was smooth, even smoother than I had expected. Perhaps it was because I had visited Temple before and remembered some of the university's layout. Maybe it was the enthusiasm and excitement of my orientation and then convocation, where I was able to learn Temple's pep rally chant.

I slipped my phone back in my pocket as I readied myself to stand and walk across the stage, in a few moments my row would be called. This was it. I was so relieved that I was not one of the students or guest speaking that day.

I looked around at the graduating class of 2014, sitting somewhere in the crowd of people were my mom, sister and two of my longtime friends. I would see one of my past professors and now mentor a little later on.

I really had to take this sight in for a moment. I've never taken a selfie before and perhaps if my phone was selfie compatible I would have. I had been rejected from Temple once before during the initial application process and then again after not passing their Summer Bridge program. Summer Bridge was a type of summer school setting that consisted of taking and passing three college leveled courses, freshmen seminar, English, and math.

Needless to say, math and I never got along well. I'll never forget the day that I was called into an office and told that I would not be admitted into the university. It was such a crushing blow, but in the end I think it was for the best. CCP prepared me to know what to expect of college-level work and how to best tackle it.

Still though, I can't help but remember how I use to always overhear my friends discussing CCP, saying how it was nothing but the "13th grade." Some simply not wanting to attend because they couldn't consider it a real college. Not true. I believe it to be a stepping stone to something greater, and it is.

So many thoughts started to form in my mind as my row started to join the long line of graduates. It amazed me at the time, and it still does on occasion, that a kid from North Philadelphia who originally had no plans on attending an institution of higher learning was now graduating from college again. It's a sight that's not seen too often in my neighborhood.

There's not much to say as I walked across the stage to accept my mock diploma, except that I did so ever so quickly. Again, I do not remember what was being said to me except the word "congratulations." I'm pretty sure however, that I said "thank you." Now, what's next? I think I dislike being asked this question so much now. I cannot say that I am not partly enjoying the free time that I have now. And the feeling of not worrying about midterms or pressuring deadlines for class assignments is a most wonderful feeling. Grad school is definitely in the plans for me, and I'm freelancing and interning where I can.

I'm actually afraid of 2015. So much is rapidly changing and I know will continue to do so. But what will it bring? What else will change for me?

No one can really answer those questions but me I suppose. I realize now from these past few years that college is a very time-consuming job. One that you may have regrets about at first but can become such a rewarding experience in the end. There were tough decisions that I found myself having to make, but I continued pushing on and I'm glad I did. I stuck with my goal.

But perhaps this is just the norm for a typical college student: making tough, but rewarding decisions.