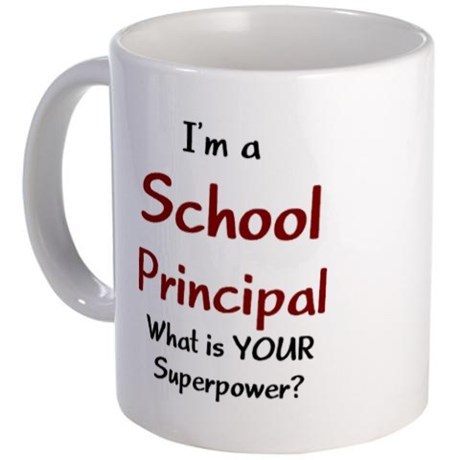 In a recent article in the New York Times, Will Miller argued that if we hope to turn our schools around, we need not only great teachers, but also great principals.

It's not an unreasonable premise. The school executive plays a significant factor in determining a school's fate. He sets the tone of the enterprise, determines its priorities; holds its participants to account; and is responsible for the overall energy of the setting.

The title "principal" is, however, a dated concept from our educational past, carrying with it certain connotations and expectations.

The primary concern of the traditional principal is maintenance of order. He presides over a tightly run no-nonsense organization, committed to the amelioration of conflict. As the chief disciplinarian, he moves swiftly and surely to exorcise any "unreliable" or uncertain elements, ensuring that the rules are properly enforced by his underlings, i.e. the teachers, even if he has to intervene personally in punishing offenders.

He is protector of the status quo, staff, curriculum, and the school's way of life from the "uneducated" onslaughts of its students, the community, and the media. His actions are informed primarily by political considerations and guided by conventional ethics and what passes as the conventional wisdom.

Though he welcomes the imagery of change and being thought of as forward-looking and progressive, he is fearful and apprehensive of genuine innovation given the unrest and anxiety it brings in its wake. Real change is messy and anarchic and replete with errors. There is no place for error in his school.

As the institution's most visible figure, he embodies and articulates the conceptual framework of the institution -- "L'école, c'est moi" -- " and is, in fact, the one least critical of it. All look to him as that force which will assuage their fears and render them secure. A goodly portion of the energies of the school is spent alternately praising or damning him.

Its public spokesperson, and its focal point, he is the head public relations man for the school. His task is to "sell" the school to the community.

He is not what is needed today. Agreed that, "We need to figure out how to get more people with the right training and support to take on one of the hardest jobs in America," as the author argues. But what exactly are the job requirements? What is the job?

The job is to head up a school, but it is not school as it is currently known, but school as it might be -- one in which new ideas might be incubated, alternate approaches to life explored, and the conventional wisdom, challenged.

The role of the leader is to initiate and expedite that process, relentlessly questioning existing practices and procedures, paving the way for innovation and change, and supporting and encouraging his staff in those efforts.

The path forward is neither neat nor linear. Much of the terrain is unchartered and marked by trial and error. Negotiating it requires that she learn to live with the impermanence and failure without which true education cannot occur.

Unlike the traditional principal, who engages in PR and "sells" his program to the community, the leader "educates." Her efforts are directed at not giving her audience what it wants, but what it never knew it wanted. Rather than engaging in a slick sales pitch, she employs rational discourse, explaining and defining the actions of her school and its people to the public. First, last, and always, she is a teacher.

Her primary task is to guarantee the one permanent feature of the school -- reason and self-reflection, which she, herself, must embody.

It is fashionable today to treat education as an impersonal business enterprise whose efforts are dictated by the cult of efficiency. It is in reality a deeply intense and personal process. Dare one even speak the word "love?"

Without love and the accompanying passion, schooling is but another hollow corporate venture, commanding the allegiance of its participants only superficially. There is no joy. And without joy, there is no learning.

The educational leader is a lover of life and people. Her love is unconditional, manifesting itself as respect for her students, accepting them fully for where she finds them as opposed to where she would have them be, supporting them in their striving towards personhood, rather than obsessing on issues of external validation.

But as they say, love is not enough. A school must also have a certain mindfulness about it -- a conscious purpose. The leader has to be not only a philosopher queen but a technologist as well, one versed in educational history, and the variety of ways one can learn and the most creative and imaginative ways they might be deployed.

Rather than recruit and train the right people for an anachronistic position and ask recruits to accommodate to it, we need to reformulate and redefine the job and the context, clearly articulate the values which should shape him/her and inform their actions and then recruit and train based on those same values.

We also need to muster the political will and determination to stand by these leaders, providing them with the moral support and political backing they require. Then and only then will we get the educational leaders we need and deserve.