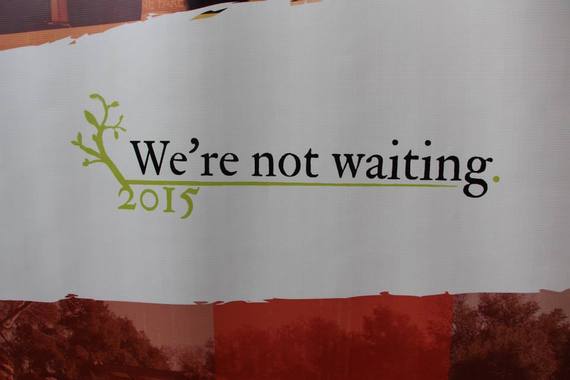 One of the things that I kept hearing this past weekend at the Jewish Voice for Peace National Membership Meeting (JVP NMM) was how people felt pushed in their thinking. Guided by the weekend's theme -- We're not waiting -- more than 600 people from across the country gathered both to envision the future and think concretely about how to be as meaningfully engaged as possible with the movement for justice in Palestine.

The weekend was intergenerational, inspirational, challenging, and, most significantly for me, had us all struggling with issues -- from Boycott, Divestment, and Sanctions (BDS) and Assaults on Academic Freedom to Islamophobia and Challenging Militarization and Police Violence -- in new ways and more intentionally recognizing and building upon the intersections among the various parts of our work and organizing.

Plenary sessions, which included JVP leaders along with deep thinkers and activists Sa'ed Adel Atshan, Reverend Dr. Heber M. Brown III, Amer Shurrab, Andrea Smith and others -- helped lay the groundwork for the weekend. Amer Shurrab stated in the opening plenary, which was echoed by others throughout the weekend, that peace and justice required, quite simply and directly, equal rights for all. Reverend Brown, who had recently been to Palestine and Israel, spoke with tremendous passion about how to engage in our inter-connected work for justice: "It is important that struggles engage in deep listening and allow themselves to be transformed by each other." Back and forth between theoretical analyses and concrete strategies for action, their words clearly resonated with an audience of energetic and committed people.

The Nakba and right of return were also centered throughout the weekend, with presentations by Basem Sbaih from Badil and Liat Rosenberg from Zochrot, which reflected a commitment to insuring that these foundational issues would not simply be an "add-on" to other discussions. Rosenberg stated with clarity: "The Nakba was not a one-time event in 1948; it is ongoing," with further emphasis by Sbaih. "We have to be honest, this work is really hard. The displacement of Palestinians is ongoing today."

People seemed anxious to learn more, to connect with others engaged in this work, and to deepen their own analysis that would help shape and inform their organizing.

I thought Andrea Smith's thinking and analysis were transformative and helped lift us to a new level. She spoke of the struggles and challenges of Native peoples in this country -- one that is ongoing -- and about the importance of understanding colonization in all its manifestations. She also spoke about the importance of envisioning what is possible in new and expansive ways.

Well over 100 college students attended the meeting. I spent time with lovely, committed students from Guilford College and Pitzer College, all of whom are involved with SJP on their campuses. They are facing formidable challenges from those on their campuses who want to shut down their organizing and silence the position that supports justice for Palestine, but they will not be deterred. Responding to attacks from members of the local Jewish community and from Hillel that her college isn't safe for Jewish students because they bring in pro-Palestine speakers like Steven Salaita, Guilford College student Sara Minsky recently wrote a letter explaining why she feels safe as a Jewish student at Guilford precisely because of its stated commitment to fostering critical, open discussion about Palestine/Israel.

JVP's role in the broader movement was also interwoven into numbers of discussions. People spoke about how to be an effective and responsible and responsive partner in a Palestinian-led movement; to continue to grow and deepen its work in Jewish communities across the country; to be intentional and bold. At the final plenary, Angela Davis spoke about the importance of JVP's leadership and the pivotal role of JVP in conjunction with movements against racism in the U.S., while also stressing the importance of leadership coming from communities of color.

The weekend was not without its tensions or differences. From quite different perspectives on the nature and reality of anti-Semitism today and whether it should be integrated into JVP's work to those struggling with the specifics and actual meaning of the right of return and the articulated concept of dezionizing Israel, probing discussion and debate on these and other issues continued well after the sessions had ended.

The most powerful part of the meeting for me was what felt like a wide-spread recognition that all that was generated throughout the weekend would become part of the thinking, the strategizing, and the organizing after it ended. And that JVP is doing its work in concert with, and as part of a global movement for racial justice that truly spans from Ferguson to Palestine.

*I am a member of JVP's board of directors.