I had not seen my equestrienne friend for over five years when I found out she was hauling a new horse from Texas to Wellington, Florida -- only a three-hour drive from my winter lair on the Gulf. For the uninitiated, tony, upscale Wellington is the center of the universe for horse competition during winter months in the United States. From January through March, the FTI Winter Equestrian Festival at the Palm Beach Equestrian Center hosts world-class jumping and dressage events on 140 acres of some of the best horse facilities in the world. Olympic riders and amateurs rub shoulders, but not necessarily in the same competition classes.

My friend and I had met almost twenty years ago when I was looking for a home and good trainer for an upper level dressage horse. "Prince Charming" found the perfect home with her, and together they have knocked on the doors of some of the most prestigious competitions in the United States. Talent and determination aside, they did not quite make it to the level of conquering the PhD of dressage horse tests, the Grand Prix.

Anyone who followed the last presidential election cycle will remember the hammering dressage took from liberal pundits who circled like jackals around the hapless Ann Romney and her Olympic contender, Rafalca. It was easy to make fun of Mrs. Romney. The amount of money it took to get to that level of competition was tailor made for the snide; and without any idea of the amount of training involved, it was child's play to take cheap and merciless shots at the sport.

Triple Crown racing winners like Secretariat require less training and less discipline, but capture the hearts of Americans hooked on speed, the flash, the made-for-TV moments, and sadly, the danger to horse and rider. Yes, watching dressage can be as tedious as watching paint dry if one does not understand the sport, and the beating heaped on the classical form of training by liberal pundits may have damaged the sport for quite some time to come.

That is unfair, uninformed and resulted from sophomoric criticism.

I reflected on fairness as I watched my friend unload this new, untested horse, at the Wellington show grounds. She purchased "Romanov" on a hunch. This horse seemed to remind her of Prince, but with a coiled "something" carried deep inside that could be harnessed creatively or remain explosive. She wasn't sure what the future might bring, but that this horse had a deep soul, there was no doubt.

Watching the two of them train in the days prior to Romi's debut at Prix St. George, the beginning of the quest for the international dressage doctorate of Grand Prix, it was obvious horse and rider had something going. Romi is big at 1300 pounds. But when my friend was schooling him in the finer points of the pirouette and precision lead changes of the Prix St. George test, Romi had a concentration in his eye and an elevation of movement that was spectacular to watch. The rider does not have this vantage point. She relies on the feel of the reins in her hands and the balance and timing of hooves, the bending of the body and that indefinable connection shared by a sensitive rider and a willing horse. 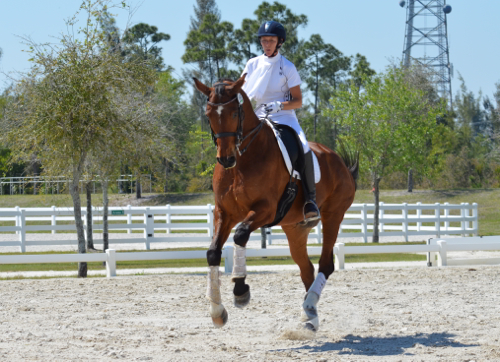 Watch a dressage horse when it is in the practice ring. The best time is at daybreak, with the mists still rising from the pastures. Warm your hands around a good strong cup of coffee and sit in a chair at the edge of the practice ring. If you are lucky, you will have a big old brown dog curled over your feet. Now close to the action, you realize that in moments of suspension the 1300 pound animal does not make a sound as hooves contact the ground after a leap into a canter. The pirouette barely moves the soil.

Cruel pundits called Ann Romney's horse a "dancing horse." Knowing nothing about what it takes to accomplish dressage movements, conceited commentators twisted the concept of beauty into mockery. A joke, a smirk, a convenient slap at the lifestyles of the Romney's may be an obscure historical footnote in the 2012 presidential election, but it is also incredibly unfair to a sport which is loved by rich and poor alike.

It takes more than money to coax a moment of suspension from an animal that is born and bred to be earthbound. It takes more than privilege to establish connection and a relationship that win a desire to work from the horse.

This horse that I observed in the early morning Florida mists was so much like our old Prince, now 27 and far past his prime. I watched Romi show a light in his eye that reflected connection, concentration and the desire to work with his rider.

Whether one is a novice or showing at the Federation Equestrian Internationale (FEI) level, the amount of training in terms of time is the same. The difference lies in the ability of the horse to execute movement requiring tremendous amounts of muscle development and innate athletic ability as the levels continue. Horses with that amount of recognized ability cost money. Hundreds of thousands of dollars, unless you get lucky and take a chance on that unique horse that has been overlooked, misunderstood or abandoned because it has not been progressing fast enough. Romi might be that horse.

Money cannot buy the mind of the horse.

At my friend's level of participation, there are no sponsors with deep pockets to pay for the transportation, training, show fees and stabling. There is no one to back you up when you are out alone on some godforsaken highway with your precious horse cargo and you blow a tie rod on your ancient diesel truck, or the brakes lock and fail on the trailer. You are completely on your own when drought hits and the costs of hay and feed go through the roof. You have no fancy arena to train in, the footing is terrible, vet bills skyrocket and you are working three jobs to support it all. 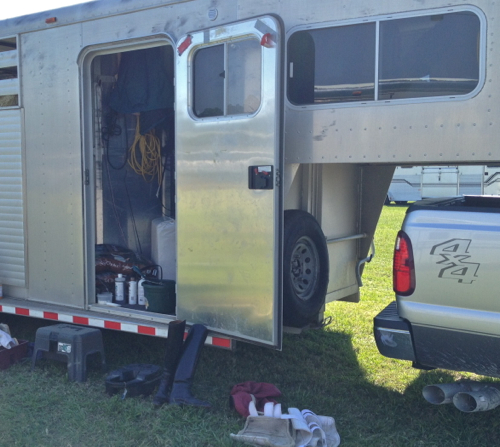 Any money you have goes into broken trailer and car parts, or your own broken bones acquired when training green horses. You find yourself approaching 50 years of life on the planet, realizing that your plans could very well turn out to be broken dreams of achievements gone devastatingly unfulfilled.

My friend bet it all on a journey from Texas to Wellington because she knew Romi had the ability to stand toe to toe with world-class riders and their mounts. And there were many world-class riders in the Prix St. George class at Wellington that day. Acclaimed international rider George Williams placed in the top tier of the test. 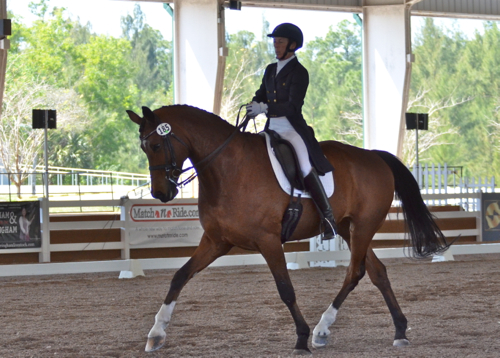 Donna Meyer and Romanov showing Prix St. George and executing the Half Pass

For those inclined to do so, it is easy to look up statistics on exactly how many dressage riders there are in the United States, their relative income levels and levels of performance and expertise. But does it really matter, any more than statistics on bowling, skiing, bronco riding or Canasta for that mater?

It was heartbreaking, in a political season where pundits were intent on breaking every rule of civility, to witness such vicious assaults on a niche sport that offers so much joy and satisfaction to riders from all walks of life. The little girl in the backwater town in central Minnesota, who has spent months preparing for a dressage Training Level test, has put just as much heart and soul into preparation as the accomplished professional showing Grand Prix at the FEI level at Wellington.

That child is dancing with her horse, and it is beautiful.