Last Friday morning I found myself frantically running out of the house to get to Marysville-Pilchuck High School. I arrived to find a chaotic, scary, and tragic scene. Another school shooting had happened in the U.S., and it was the second in Washington state this year. It was odd, in a way, as I found myself taking pictures while high school students broke down in tears. I've taken pictures of many similar scenes before, but something felt more strange on that day.

Tragedy had recently struck in my personal life. I had lost a cousin only days earlier, and he was much too young to go. I wondered, "What would my own family members think if they were the ones here at Marysville-Pilchuck High School being photographed? What if it were me?" It didn't feel wrong to be present that day near the high school, when busloads of evacuated kids were reunited with their loved ones, but it was a strange, sad, and chaotic experience.

Many things about working as a photojournalist in Washington in 2014 have been tragic. A massive mudslide in March between Oso and Darrington killed 43. A KOMO News helicopter crashed near the Space Needle, killing two. A shooter opened fire at Seattle Pacific University in June, killing one and wounding two more. The Carlton Complex Fire, the largest in state history, burned over 250,000 acres this summer, consumed scores of homes, and caused one heart attack death. I was on scene during or shortly after all of these events, subjecting myself to trauma but with acute awareness that yes, I choose to be here. The question is: Why? And how can I make sense of so much tragedy? 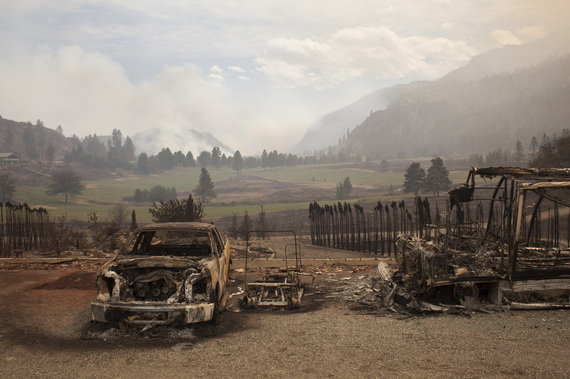 (Above: Aftermath of the Carlton Complex Fire. Photo by David Ryder)

It's normal to feel angry, sad, or fearful. There may be no answers to our questions, but I talk with friends, family, and colleagues. Some turn to religion, which has played a massive role in Oso, Marysville, and at SPU. I also approach my work with an academic lens to find meaning and to heal.

Much has been written in the academic realm about journalism and tragedy, but I think Susan Sontag's words continue to resonate decades after she wrote them. This is a poignant quote from her book, Regarding the Pain of Others, that helped me this week: "There is nothing wrong with standing back and thinking. To paraphrase several sages: 'Nobody can think and hit someone at the same time.'"

(Robin Youngblood on Surviving the Oso, Washington Mudslide. By David Ryder for The Weather Channel.)

This Susan Sontag quote has helped me during what has been a difficult week, a difficult October, and a quite challenging 2014. Hopefully you might find it useful, too.