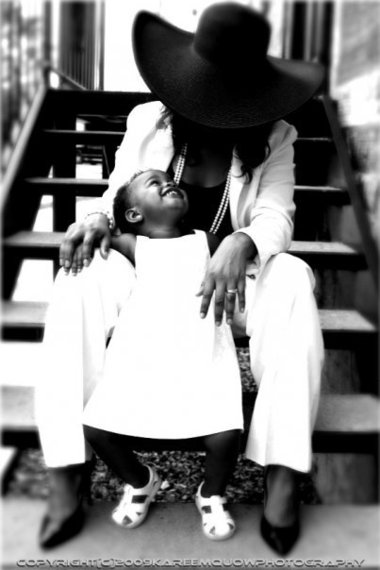 Photo Credit: Kareem Quo Photography - Me and my little one

The past week has been a rollercoaster of reflective (and mostly introverted) emotions. I was on the phone with my girlfriend humorously catching up on life, work, and relationships - she was describing her latest connection from the cult dating site Coffee Meets Bagel - when I noticed reports on social media of a mass shooting at a church in Charleston, South Carolina. I went to CNN to confirm the reports and learned that six women and three men - all African American, were massacred while holding bible study at the historic, Emanuel African Methodist Episcopal (AME) church. I went to sleep in a blur that night and when I woke the next morning, the details continued to get worse. The shooting suspect was identified as 21-year old Dylann Roof, who in a hate-filled racist manifesto, proclaimed that through these acts, he wanted to start a race war. Blank stare.

Overwhelmingly, my strongest emotions were sadness and powerlessness. As a millennial raised in the Deep South, I was mostly shocked at the fact that a very young, white male hated a group of people so much, that he was driven to commit a depraved act of violence to prove his dominance and disdain. How could this young man - barely an adult - harbor so much hate? Could it be that there are some of my peers that also hold such deeply engrained beliefs and prejudices? Gasp. Is this tragedy any different from the 1963 bombing of the 16th Street Baptist Church in Birmingham that killed four little girls? Have we made any progress as a nation in race relations? Are Millennials really that evolved? I have so many questions and, admittedly, when I am with my non-African-American associates, of all the topics that we discuss, race relations are never one of them.

A recent survey found that, when it comes to explicit prejudice against blacks, non-Hispanic white Millennials have similar beliefs as whites belonging to Generation X (born 1965-1980) or Baby Boomers (born 1946-1964). This had me further reflecting on my own experiences with race and how it has shaped my views. My earliest childhood memory of being acutely aware of my race was when I was about 6-years old attending an Independence Day parade in Albany, GA. My mom, a single mother, took my brother and I to the parade and we were so excited. One of the parade participants was throwing candy and t-shirts randomly into the crowd. My brother and I excitedly screamed, "Catch it, mama!" and watched as she stood and reached to grab what looked like a golden t-shirt sent from the heavens on its way directly into her hands. Right as she caught it, a middle aged white male seated behind us reached over her and snatched the t-shirt from her hands and uttered, "it's mine, n*gger!". I looked at my mom and looked at this man - and then back at my mom - wondering why she did not say anything in response. My mother mumbled something under her breath and then quietly sat down. I didn't understand at the time, but I realize now that she chose a passive response to protect her young children. You see, my mother grew up in Albany where race relations were so tense that the city is sometimes referenced as the location of Dr. Martin Luther King's only unsuccessful civil rights march. The Albany Movement aimed to end all forms of racial segregation in the city, focusing initially on desegregating travel facilities, forming a permanent biracial committee to discuss further desegregation, and release of those jailed in segregation protests. Through the course of the campaign, Albany protesters utilized various methods of nonviolence, including mass demonstrations, jail-ins, sit-ins, boycotts, and litigation. Notably, in addition to student activists, the campaign involved large numbers of black adults of varied class backgrounds. Although the Albany Movement was successful in mobilizing massive protests during December 1961 and the following summer, it secured few concrete gains. I am sure that my mother's response at the parade nearly 25 years later was a stark reminder of the long-standing racial attitudes that remain.

From that point on, I vividly remember being aware of my skin color and those of my peers and curious about our differences and perceived value - it's a hyper-consciousness that has followed me throughout my life. And as a millennial, access to the Internet and virtual dialogues have only magnified my sense of awareness as I've grown. This awareness has its positive and negative effects - I want to show that I am just as good as others that may look differently from me and place pressure on myself to succeed (sometimes too much). I also make a point to integrate across cultures, and sometimes engage with a nervous energy as I secretly hope they see beyond my skin color and like me for "me".

If I could place two calls to action for Millennials in response to the tragedy in Charleston it would be to, first, take a breath and accept that racial tensions are a part of America's story - no rationalizing the evidence of diversity and acceptance that appears in our own social circles will erase the fact that there are still pockets in our country that are stuck, hardened, and quietly holding on to prejudice beliefs. Denial helps no one. Next, I would ask every millennial to be intolerant of prejudice attitudes by anyone in their social circle. While we have no reservations with talking through issues on social media, I encourage all Millennials to disconnect digitally and reconnect interpersonally with others in their networks who may express racially insensitive viewpoints - whether it be our parents, grandparents, friends or colleagues. Be a change agent and lead a conversation - ask them why they may feel that way and to describe their prior interactions with minorities. Expose them to environments or introduce them to others that may offer an alternative to their views. I want to really believe that our nation is making progress on race relations, policy, and symbolism. Millennials are key to pushing the conversation forward so that we can. Our nation needs us.