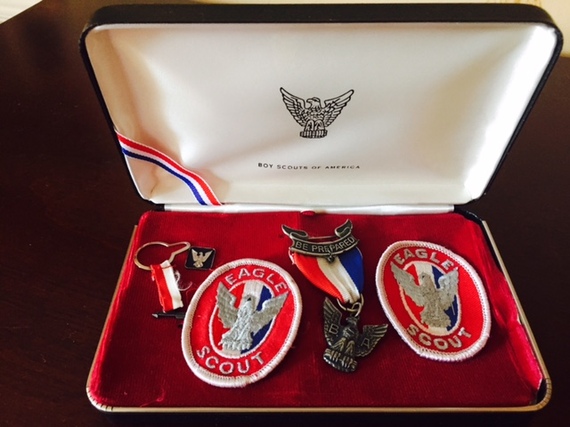 More than a few times every year I get requests from an aspiring Eagle Scout or the parents thereof asking me to write a letter of congratulations upon or encouragement toward their achievement of that rank. Most likely, they've reached out to me because they've found me on the list of "Famous Eagle Scouts."

As you can imagine, this list is comprised primarily of Presidents and politicians, military commanders, astronauts and business tycoons, with a few entertainers and sports stars interspersed, and fewer still, people like myself whose songs have helped build movements for social change and peace across the world.

Recently, the most interesting request came. A parent reached out to me who is making a deck of cards with images of influential Eagle Scouts on one side, and the Boy Scout fleur de lis for the back-face as a gift to his Cub-Scout son. I was asked to sign my card with an encouraging word and send it back, which I did.

I thought, what a wonderful idea - to give a deck of cards that will inspire youth with myriad possible life paths, without prejudice, to inform how they will choose to interpret and apply in their lives the concepts of dedication to fellow humankind and our planet central to Scouting ethics.

Each day since receiving the card, I have reflected on Scouting, and what it means to be the original global citizen, an Eagle Scout, today and for future generations.

To me, being a Scout, and especially an Eagle Scout, requires total commitment to putting oneself at the frontlines of humankind's struggle for global social and economic equality, peace, and the saving of our planet, three goals which are intrinsically linked.

Scouting is the biggest youth movement in the world, comprised of Girl and Boy Scout organizations in over 220 countries, with some 40 million active members who meet regularly, often weekly. They follow a set of founding principles inspired by the Native American social philosophy of living in harmony with nature, advocating that we are one family beyond borders, and that the welfare of all depends upon the welfare of each one of us.

In this era of collapsing borders, the scout is called upon to take a stand against racism, elitism, gender and sexual discrimination, inequality, poverty and war in our efforts to lead humanity forward through troubled times. Anything less reduces the profundity of our collective global reality, and with it, the magnitude of responsibility facing aspiring scouts today.

Over the last two years, the Boy Scouts of America were embroiled in a fierce debate over discriminatory membership policies banning gay members. A year ago, under mounting pressure, the ban on gay youth was lifted, but not on adult leaders. Then, this spring, following the Supreme Court ruling recognizing same sex marriage, that policy became untenable.

I applaud another Eagle Scout, former Secretary of Defense and current President of the Boy Scouts of America, Robert Gates, who upon the Supreme Court's ruling implored the organization to change its discriminatory membership policy in order to remain both in step with constitutional jurisprudence and the times. A week ago, the board of the B.S.A. voted to allow gay leaders.

There are some who are still trying to cause division and make issue of this necessary, and inevitable vote. The B.S.A. had no more business asking anyone their sexual orientation than do scouts or leaders have in thinking that the youth leadership organization is a forum for political, religious, or sexual persuasion of any kind. We wear our uniforms specifically as a symbol of our shared principles across national, ethnic, political and religious boundaries. We are joined in service to humankind.

It is time to refocus our energies in that positive mission by which we are bound. The Boy Scouts of America should be concerned not with whom they exclude, but with the quality of individuals it produces.

Whether Eagle Scouts become military generals like Colin Powell or social change movement builders like myself, great leaders refuse to allow themselves to be defined by whom they are against. Great organizations, and individuals, tomorrow's Scouts, must strive to unite the widest diversity of people in the common good by emphasizing what we stand for, together. Scouting is only as powerful as it is inclusive.

The same week that the B.S.A voted to end its discriminatory policies, The World Organization of the Scouting Movement held its global jamboree in Japan. Over 33,000 scouts, girls and boys from across the planet, attended under the theme of global unity. The WOSM advocates world tolerance, inclusivity, peace, multi-ethnicity and multi-faith.

With its many millions of youth aspiring to such a forward thinking global citizenship, the potential of Scouting in today's rapidly changing world landscape cannot be underestimated, and should be maximized. Here at home, it is time for us to seize this spirit of inclusivity, and focus our attention on bright, endless horizons.

Stephan Said is an internationally acclaimed musician, activist, and Eagle Scout. He has appeared in the The New York Times, TIME, The New Yorker, The Guardian, NPR, PRI, BBC, Democracy Now!, and more. He the co-founder of difrent: a production company telling the stories of youth making change across the planet. He lives in New York City.