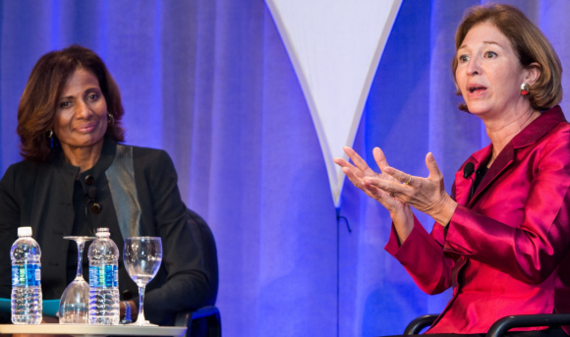 It's a phrase that has launched 1,000 arguments among working women. And it needs to go.

Dr. Anne-Marie Slaughter, president and CEO of New America, is tired of the phrase "having it all." Even though she is the one who catapulted it into the global conversation about women, family and work.

Speaking to a crowd of nearly 2,000 women and men at the 31st Annual Chicago Foundation for Women Luncheon last week, the former dean of Princeton University's Woodrow Wilson School, and former director of policy planning for the U.S. State Department, spoke about her dramatically revised view of ambition, women's leadership, working women and gender equity at work.

"I did have it all and I had it all for years," said Slaughter, author and foreign policy expert, as well as wife and mother of two sons. "As dean of a public policy school, I set the rules. I lived a mile from my office and my kids' school. I had two sons and a wonderful husband."

But after she moved to Washington D.C. to work for "a great boss, Hillary Clinton" as the first woman policy director in the State Department, she learned, "The world does not wait on your children."

With difficulties arising with one of her teenage sons at home in New Jersey, she realized she needed to make a different choice. "I spent years telling women, 'Of course you can do it.' It opened my eyes to what it takes for women and men to have work and family," Slaughter said.

Even after her 2012 article, "Why Women Still Can't Have It All," appeared in The Atlantic and ignited a fiery global conversation about working women and family, she says the notion of "having it all" is misguided.

"We should not use the term. It makes women sound selfish. It's not a good frame. The issue is equality," said Slaughter, who writes a monthly column for the Financial Times. "We have to think about our lives in another way other than the workplace design of the 1950s."

The language around working women, leadership and caregiving roles -- whether that is self-care, childcare or elder care -- needs to change, Slaughter said. She offered three concrete solutions:

"This can't just be about mothers or parents, the conversation has to have a sense of the rhythms of life," Slaughter said. She added that women have a life expectancy of 86 years old and some women will live to 100. Retirement age is 65.

"You are not going to knit between 65 and 100." So we need to have more balanced and realistic conversations about life and work that are for both men and women.

The author of the 2015 book, Unfinished Business: Women Men Work Family, also said this approach to life and work must involve both men and women. "The problem is as long as we are just talking with this about women, we are limited with what we get."

That notion was reflected in the introduction by K. Sujata, president and CEO of Chicago Foundation for Women, who said, "We cannot wait for another generation of women workers to earn the same as men."

With the intention to end gender bias in Chicago by 2030, Sujata defined The 100% Project, which is "an all-in, all-out effort" to make Chicago a place of economic security for women. That will happen with "increasing investments in organizations that invest in women's economic security."

"We invite men to join us as champions for change to hire and promote women on your teams and to give women an opportunity to shine," Sujata said.

"Indeed, the percentage of female CEOs in the S&P 500 dropped to a minuscule 4.4 percent in 2016, down from a slightly less minuscule 4.6 percent last year, according to data from Catalyst," writes Melissa J. Anderson in Glasshammer.

At the CFW event, Slaughter echoed the need for men to join in a solution to end gender bias, but also added that public policies need to address what she termed "the care trifecta." That involves paid family leave; access to affordable child care; and flexibility with hours, including deep flexibility with working from home.

Childcare costs are estimated as high as $12,500 per year per child in some states.

"That will help the poorest women and also wealthy women," said Slaughter, author of The Chessboard and The Web: Power, Policy and Leadership In A Networked World, set for 2017 release.

According to Slaughter, "We have too few women at the top and too many women at the bottom. Valuing care is a way to support all women." She added, "If women had been in charge from the beginning, we would not be having this conversation."

This column originally ran in Take The Lead Women.