Refugees survived "year of hell" -- now at risk of disease

Camps sheltering more than 100,000 Sudanese refugees in South Sudan's Maban county are ticking timebombs, on the brink of a major outbreak of disease, according to a new release by agency Oxfam.

Oxfam called for new, safe locations to be urgently identified for thousands of the refugees, to ease the burden on the overcrowded camps in Maban.

After one year of conflict in Sudan's Blue Nile state, over 100,000 refugees have fled across the border to four camps in Maban, which all face the threat of recurrent flooding due to heavy rains, chronic drinking water shortages and disease. The recent heavy rains have brought massive health challenges. The camps are already above capacity, but there are predictions another 60,000 people may arrive when the dry season makes movement possible in the next few months. 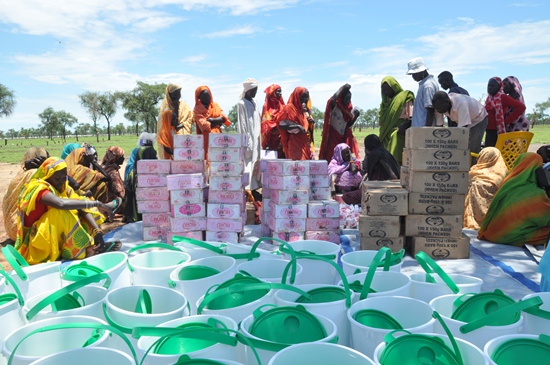 Refugees in Jamam camp queue up to receive buckets and soap as part of Oxfam's public health campaign to reduce the spread of diseases such as cholera, diarrhoea and Hepatitis E in the camp. Photo: Alun McDonald

With crucial talks between Sudan and South Sudan set to end in the coming days, Oxfam said the world needs to step up efforts to find a peaceful solution to the conflict in Blue Nile, and to a parallel conflict in Southern Kordofan state, and said an immediate injection of funds is needed to prevent a major disaster in Maban.

The agency called on the Government of South Sudan and the international community to prioritise finding new sites outside of Maban. Sites close to the River Nile were proposed earlier this year, but discussions have stalled.

"These refugees have struggled to survive a year of hell. The Maban camps alone are not an answer to the crisis -- there is simply not enough ground water to sustain so many people, and now heavy rains have left people wading through mud to get basic services. So far aid agencies have managed to prevent a major crisis during the rainy season. However, agencies cannot keep trucking in water and air-dropping food year after year. If the refugees stay where they are this will require a sustained supply of funding that will run into hundreds of millions of dollars," said Pauline Ballaman, head of Oxfam's emergency response in Maban. 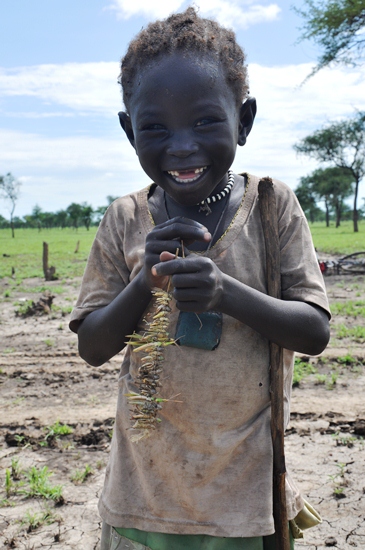 Young children in Jamam scour the camp, spearing grasshoppers on sticks, to be cooked and eaten later. Photo: Alun McDonald

The lack of drinking water and the frequent relocations of people to try and escape flooding, means refugees are unable to grow food and remain dependent on food aid, so need a suitable longer-term location. Despite the challenges, over the past year Oxfam engineers have managed to double the water supply in Jamam camp, but any disruption to a fragile single source would plunge refugees back to receiving just two litres of water a day -- well below emergency standards.

Maban county is among the most remote and least developed areas in South Sudan and during the rains the only way to get aid in is by air or boats. This, and the extremely high cost of fuel and scarcity of materials because of South Sudan's conflict-fuelled economic crisis, has meant the humanitarian response in Maban is one of the world's most expensive. Oxfam's response alone for the next six months requires at least $5 million.

Oxfam warned the environmental strain from the camps in Maban is likely to exacerbate tensions between impoverished local communities and refugees, with growing competition over scarce water and thousands of trees cut down for construction at refugee sites. 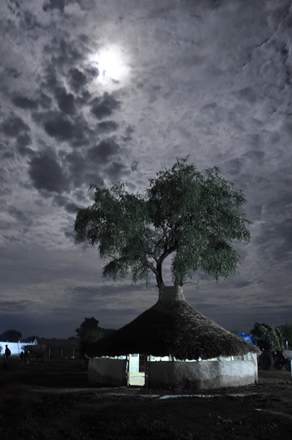 The Oxfam base in Jamam refugee camp at night. Photo: Alun McDonald

Restrictions on humanitarian access in Blue Nile means reliable information is scarce but the UN estimates that 145,000 people who remain inside Blue Nile are displaced or severely affected by the conflict -- many likely to be in even worse circumstances than in Maban county. Oxfam called for an immediate end to the fighting and for international pressure to be kept on both sides for peace negotiations to begin, and for sustained aid to be urgently allowed into the region, including into areas held by SPLM-North.