Hundreds of well-wishers greeted one of the last refugee families to arrive in the U.S. after President Donald Trump signed an executive order temporarily halting the refugee resettlement program and travel from seven Muslim-majority nations.

Hassan Barat Ali Hassan, Fozia Ramazan Ali Qurban Ali and their five children flew into Salt Lake City International Airport on Thursday, according to the Salt Lake Tribune. The family is from Afghanistan and has been living in a refugee camp in Pakistan for two years after fleeing the Afghan war.

About 300 people gathered at the airport to welcome the family to Utah and show their support for refugees. They brought festive signs, banners and balloons.

Thank you everyone who came out to welcome our last #refugee family before the EO takes effect! We were overwhelmed by your support! Welcome Ali-Hassan family! #refugeeswelcome #nobannowall

“This is the first time in our life that we are welcomed,” Ali Hassan said through an interpreter, according to the Deseret News. “We came here with a big hope to build a bright future for our children, so they will be able to get education and also higher education.”

"This is Utah. This is America." - Catholic Community Services representative welcoming this beautiful refugee family of 8 from Afghanistan. Emotional and overwhelmed by the love and beauty that still can exist in this world. It's a beautiful thing to be surrounded by humans loving humans. Welcome to Utah!

Last Friday, Trump issued an executive order that suspends the refugee resettlement program for four months, bans Syrian refugees indefinitely and temporarily halts travel from Iran, Iraq, Libya, Somalia, Sudan, Syria and Yemen. It also significantly lowers the number of refugees the U.S. will accept each year. Trump claims the ban will help protect the country from terrorism, but no immigrant from the affected countries has committed a fatal act of terrorism in the United States.

The ban, which bars more than 200 million people from entering the U.S., has faced widespread opposition and legal challenges from refugee groups, civil liberties organizations like the ACLU and members of the public who believe the executive order discriminates against Muslims.

It could also prevent 20,000 refugees from coming to the U.S., according to estimates from the United Nations. Refugees already cleared for arrival might have to go through the extensive vetting process again and could end up waiting for years, resettlement agencies told The Huffington Post last week.

Utah Gov. Gary Herbert, a Republican, previously questioned the effectiveness of a broad ban on refugees and individuals from specific countries. The governor tweeted a photo of Ali Hassan’s family as they arrived at the airport, welcoming “Utah’s newest pioneers.”

The welcome party was organized by Catholic Community Services of Utah, an organization that resettles about 600 refugees each year.

According to the Tribune, Utah accepts about 1,200 refugee annually. Sixty-eight other refugees scheduled to arrive in the state had to cancel their trips after Trump signed the executive order, The Associated Press reports.

Real proud of my fellow Utahans for showing up to welcome the last refugee family allowed in for the next 120 days: a family of eight from Afghanistan. Hassan, Fozia, and their five children fled their home in war-torn Afghanistan two years ago and have been living in a refugee camp in Pakistan, awaiting approval to enter the United States. I am so grateful I was able to be one of the 300 to welcome them into our city. And I look forward to welcoming many more. #MakeAmericaKindAgain #NoBanNoWall 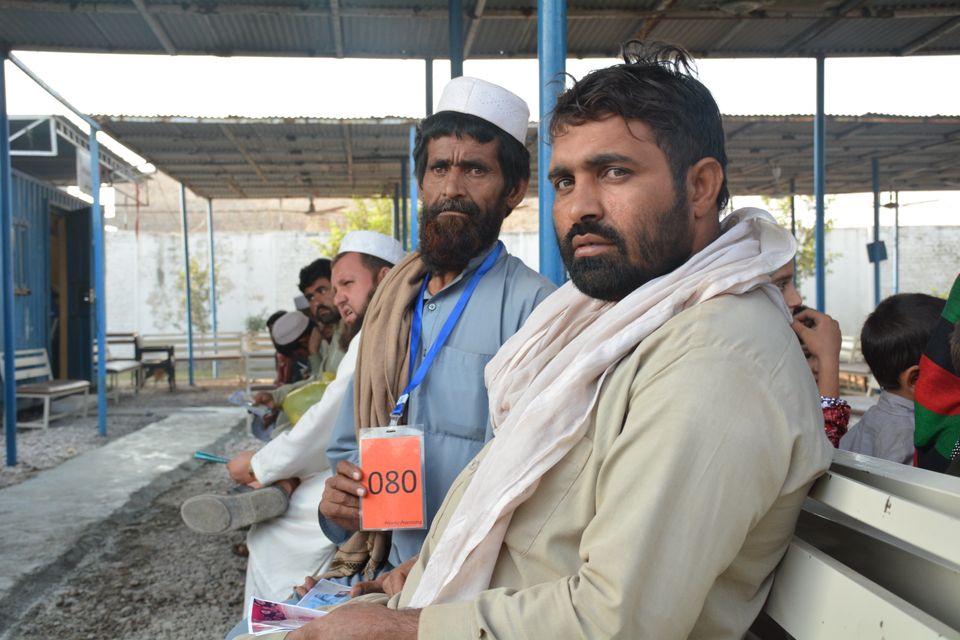 1 / 12
Two men sit and wait for their number to be called to complete the repatriation process. Each refugee family is allotted an identification number at the beginning of the process, which they are identified by throughout the rest of the process.&nbsp;
Haroon Janjua/WorldPost