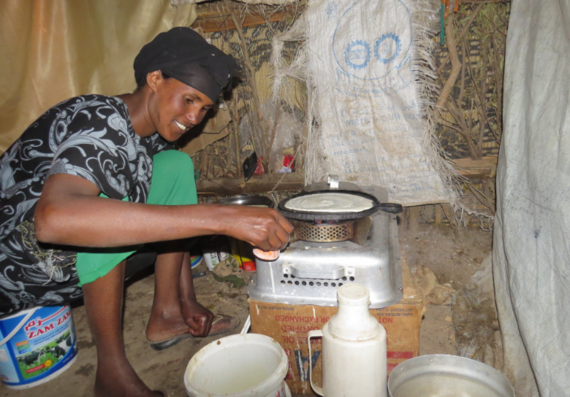 There are 65 million forcibly displaced people worldwide today - the highest number ever recorded. The large majority lack access to clean cookstoves and fuels, which can result in women inhaling clouds of toxic smoke from fires and spending hours collecting cooking fuel far from camp. Refugee Hibo Mohamed Ibrahim (pictured above) talks about the risks she and her family face while gathering fuel for cooking and describes how a new ethanol cookstove changed their lives for the better:

"I used to live in Mogadishu, Somalia, before fleeing to Ethiopia in 2008 following the return of the crisis in my country. I have been living in Sheder refugee camp since 2008 with my five children and husband. Life in the refugee camp has been very difficult and challenging to my family. One of the major challenges we faced was lack of cooking fuel.

"I had to collect firewood with my daughters, walking more than six hours, at least three days a week, facing the dangers of assault, rape, and animal attacks. It caused unending stress and pain to expose myself and children to the risk. Listening to the horrible incidents that happened to my friends and neighbors while collecting firewood was torture. Sometimes, I was too scared and exchanged part of my food ration for firewood and charcoal. The food rations we receive have never been enough but as a mother I had to make the difficult decision.

"I also had trouble from the cooking smoke and the long time it took to cook with firewood and charcoal. Thanks to Allah and Project Gaia, I have used ethanol since early 2015, changing my family life for better. Now I have a clean and fast cooking stove and I don't have to starve my family to get cooking fuel. We now feel safe and relieved from the firewood smoke and cook meals in a very short time."

Hibo is one of thousands of refugee women whose lives have been improved through access to clean cookstoves and fuels. Learn more from the United Nation's World Humanitarian Day or from the humanitarian programs of the Global Alliance for Clean Cookstoves.