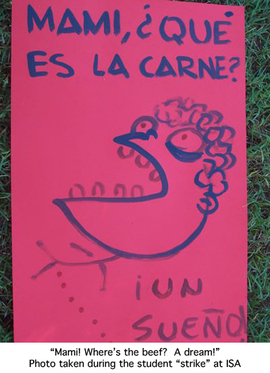 It's rare to find a bicycle-taxi or an old car in use as a taxi anywhere on the island that doesn't feature, at full volume, the catchy expressions of genre that shows no signs of dying out. One of the most interesting elements of reggaeton's permanence among us, is how little it resembles the music of social consciousness we heard so much of in the sixties and seventies. If the songwriter of that era alluded constantly to his dedication, willingness and desire to contribute to the social process, the tunes today show an individual attraction to the material and a focus on satisfying immediate desires. Musical creation has ended up showing a process of change much more complex than a couple of chords or some new dance steps.

While on the stage a group of boys repeats almost to hysteria, "Mami, goza!" (which might be roughly translated into English as, "Oooooh! Tha's my boo bear! Git it! Git it!"), the crowd sways and sweats under the colored lights. There is no lack of those who publicly criticize the spread of these new rhythms, tied to their foreign currents or consumerist tendencies, but the fans of reggaeton care little for that. For them, a resounding chorus that calls for enjoyment is--like it or not--the new anthem of these times.

Reggaeton Cuba
This Blogger's Books and Other Items from...