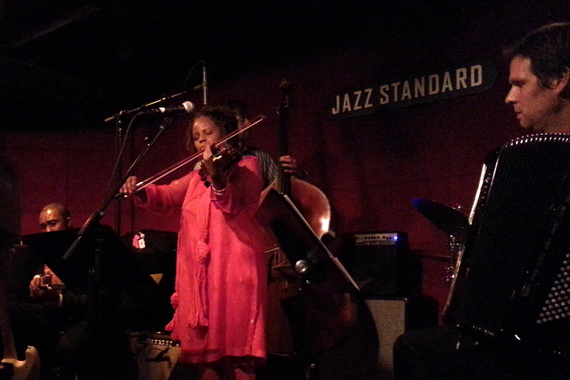 On Saturday August 16, 2014 the violinist Regina Carter brought some Southern Comfort to the New York's Jazz Standard. It was apropos to be enjoying the Standard's sumptuous Blue Smoke barbecue cuisine prior to the first set of Ms. Carter's delicious treatment of American roots music. It was the perfect pairing for an all-American evening of fine food and even finer music.

Ms. Carter, who is small in stature but commanding in the presence of her violin, was joined by an accomplished group of like-minded musicians. Anchored by the rhythm section of Chris Lightcap on acoustic bass and Alvester Garnett on drums, the group included two musicians Marvin Sewell on guitars and Will Holshouser on accordion, who seemed to have an invisible tether to Ms. Carter's musical mind.

The music was from Ms. Carter's recent album Southern Comfort, a musical experience which was born out of the violinist's interest in discovering the music that existed during her father and grandfather's time. The research took her to the coal mines of Alabama where her grandfather originally worked. The music of the time was annealed from the varied experiences of the workers who came from many disparate European and African backgrounds. It was the discovery of the field recordings from these times, a few of which Ms. Carter shared on stage from a recordings stored on her phone, that made the music so compelling. This was Americana music at its best, work and play music that sustained those who heard it while carrying on with their often difficult lives.

From the impressive glass slide and finger picked guitar opening by Mr. Sewell of "Miner's Child" and the melancholic wail of Ms. Carter's violin you knew you were in for a treat listening to music that could clutch at the tendrils of your soul. Ms. Carter has it all, precision, superb intonation and a creative spirit that makes her instrument sing like a plaintive voice. The group was marvelously intuitive in their approach to this music, which they played with a great deal of feeling and respect.

On vibraphonist Stefon Harris's fast paced arrangement of "Breakaway/Death Have Mercy," drummer Garnett played a moving Cajun-inspired rhythm that led into a stirring solo by accordionist Will Holshauser, who at times made his accordion sound like a carnival calliope.

On the Graham Parson's tune "Hickory Wind" Mr. Sewell played glass slide on an electric Telecaster-style guitar. His technique was so flawlessly smooth that if you closed your eyes you could have easily mistaken it for a pedal-steel guitar. He lingered on long drawn out notes that hung in the air like wisps of cumulus clouds over a hot southern landscape. On this slow, sauntering tune Ms. Carter took the opportunity play with the heart wrenching poignancy that only a fiddle can elicit. Mr. Holshouser's harmonies were magically in-sync with Ms. Carter at almost every turn. The two seem to have an empathetic connection that is magical to behold.

Ms. Carter took to the microphone to explain her journey through her father's genealogy, where she was DNA tested to discover she was 73 percent West African and 13 percent Finnish. So she quipped her next record might explore Finnish music, tentatively titled "I'm Finnish-ed." She related visiting her father's relative's in the rural South during the summers of her youth. She then played a brief recording of a children's school song that was taken from an archival collection of recordings from an all girl's school in Alabama, titled "See See Rider." The song, as played by Ms Carter and her group, was particularly moving. Ms. Carter's raspy violin repeated the refrain pointedly. At times during her soloing you could hear glimpses of her quoting what seemed to be Bill Wither's soulful "Use Me." Mr. Holshauser brilliantly complimented her sound with rich harmonies that would swell in and out with careful squeeze of his instrument. Mr. Garnett playing with his bare hands on his drums and Mr. Sewell and Mr Lightcap accompanied perfectly.

The group launched into a cacophony of sounds that at once seemed disparate and free and then broke into the more identifiable sound of what sounded like a New Orleans's inspired march which I believe was written by drummer Garnett. Mr. Garnett kept the drill step cadence superbly and Mr. Holshauser playfully soloed in a Cajun-styled mode. Mr. Sewell had an extended solo as Ms. Carter looked on, leading to a bass solo by Mr. Lightcap. Ms. Carter soloed in a style that was reminiscent of Stuff Smith, with a dissonant dual string attack and references to "Farmer in the Dell" and other barnyard favorites sprinkled in along the way. The song ended with a rousing and rambunctious drum solo by the ever-present Mr. Garnett, who was finally let out of his box to strut his ample chops.

The first set ended with the traditional hymn "I'm Going Home on the Morning Train" which was arranged and played on the album by the tasty guitarist Adam Rodgers. Mr. Sewell started the song off with a soulful bluesy guitar lead in. Mr. Holshouser's moaning accordion sound gave the song a moving reverence, the feel of a church organ at a bible reading. Ms. Carter's violin was particularly poignant on this hymn as her Appalachian heritage came pouring through with a sincerity that was tinged with a bit of melancholia; a combination that makes this music so moving. If, as Ms Carter has said, the music is through her not from her, then it deserves to be heard and we should embrace it with open arms. For those who enjoy this kind of American roots music, played to perfection, Southern Comfort is a must have in the same category as the late Charlie Haden and Pat Metheny's memorable Missouri Sky.