On Thursday, U.S. Senators Robert Menendez (D-NJ) and Ben Cardin (D-Md.) co-chaired a joint hearing of the Western Hemisphere and International Development Subcommittees of the Senate Foreign Relations Committee. The topic of the hearing was "Rebuilding Haiti in the Martelly Era." Panelists included Major Joseph Bernadel, Permanent Representative of the Haitian Diaspora and member of the Interim Haiti Reconstruction Commission (IHRC); Regine Simon-Barjon, President, BioTek Solutions, Inc./Biotek Haiti S.A.; Georges Barau Sassine, President, Association of Haitian Industries; and Gary Shaye, Haiti Country Director, Save the Children. The hearing examined the roles of private investment, international donors, aid agencies and the Haitian Diaspora as Haiti struggles to rebuild in the aftermath of the January 2010 earthquake. It soon became clear that there is more than lack of infrastructure blocking Haiti's path to recovery.

Looming over the hearing was the fact that newly elected President Michel Martelly's choice for Prime Minister, Daniel Rouzier, was soundly rejected by Haiti's Parliament on Tuesday, effectively limiting Martelly's ability to govern, and diluting confidence in foreign donors. Despite Major Joseph Bernadel's repeated assertions that "Haiti is open for business," the question remained, "open for business for whom?" Will the focus be on the impoverished Haitian population, or will disaster capitalism take hold as foreign investors take their aid money and run?

The prepared, written testimony of each of the panelists is available for download here, but the responses of the participants to direct questions by Senators Menendez and Cardin revealed more about the forces operating behind international curtains of power than pages of prepared testimony could offer.

Barjon was the only panelist who forcefully and directly championed the Haitian people, acting as the conscience of the hearing, just as she did in March 2010, less than six weeks after the earthquake, when she faced off against a roomful of fear mongers and aid vultures at a post disaster conference in Miami.

Barjon's consistent mantra is that sustainable agriculture is the solution to Haiti's reliance upon outside aid. 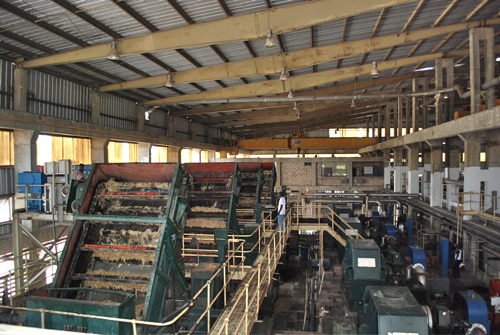 The Darbonne Sugar Mill has the production capacity to produce 100,000 metric tons (MT)/year of sugar annually, - thus can displace 50% of Haiti's sugar imports and produce an estimated 12 to 15 megawatts (MW) of renewable green energy to service the capital, Port-au-Prince. Photo: G. Nienaber

Haiti's status quo has been ineffectual for 200 years. Haiti's history of mismanagement and strife has resulted in a poverty rate that climbs over 80%, continued reliance on Diaspora remittances,- which represented between 23 and 30 % of Haiti's gross domestic product (GDP) in 2010; - in addition to Official Development Assistance (ODA) which also accounts for some 10% of GDP);While the land is over 98% deforested and the topsoil washes away to the sea. These ongoing conditions have created unprecedented erosion and challenges to sustainable agriculture--which in turn has lead to the massive urbanization of the capital, Port-au-Prince as well as an over-reliance on imports. ~~Barjon testimony 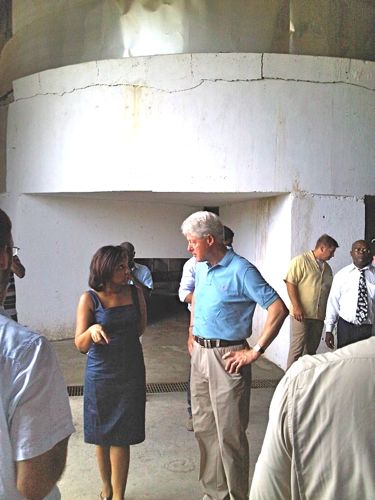 After a reading of prepared testimonies, Menendez questioned the panelists regarding Haiti's ability to "move into the future," and how the rejection of Rouzier would affect investor confidence. Bernadel responded that allowing the Haitian Diaspora to have dual citizenship and voting power would go a long way towards giving a sense of stability to donors. But is this what is needed in Haiti at this time? What about the one million Haitians still displaced and a countrywide population facing an invigorated cholera epidemic?

Dual citizenship will not solve these problems when Haiti needs the basic human rights of clean water, sustainable jobs and infrastructure.

Barjon fired back that Bernadel's comments proved that "what Haiti needs is investment in the private sector," offering the analogy that 85 percent of the work force in the United States is employed by small to medium business, the likes of which do not exist in Haiti. By "empowering people," Barjon said, they would have the confidence to fight back against the "kinds of parliamentary shenanigans," that took place this week with the rejection of Martelly's choice for Prime Minister.

Menendez followed up, asking for the "three singular things" required to achieve private investment inside of Haiti. Sassine responded that Rouzier should be confirmed, implying that this would boost confidence in the Martelly government, dual citizenship for the Haitian Diaspora, and better real estate protection. Bernadel concurred that the Diaspora needed more protection and that Haiti needed massive investments in education. Bernadel then shockingly suggested that health care needed reform because "tourists and the Diaspora" were afraid of disease and "the widespread fear of contamination."

Sassine even went so far as to suggest, in response to a question by Senator Cardin, that Cholera and HIV/AIDS were under control.

It should be mentioned that in his written testimony, Gary Shaye of Save the Children, addressed the cholera epidemic and the urgent need for sanitation infrastructure, the only panelist to do so.

In an incredible disconnect, the "live" responses never addressed the real, immediate and urgent needs of the Haitian population. This omission was glaring until Barjon once again stepped into the conversation.

Appearing somewhat incensed. Barjon fired back that Bernadel's response was a way of "looking for other people to come and fix Haiti's problems." She added, "Illiteracy does not mean stupidity. The people of Haiti know what they want. This is an agricultural country, with two thirds of the people working in agriculture." The people of Haiti want and need local food security so they are "not subject to global price fluctuations."

Perhaps the best moment of the hearing came when Senator Cardin asked Barjon how women are being empowered in the Agricultural sector, digressing to a line from his press release, demanding equality in land tenure.

Searching for common ground, Barjon suggested that Cardin was correct that women in Haitian society endure the same challenges that women in the US face. At the same time Baron said "Look at me. I'm a girl, I meet with the men in the fields, I'm their boss, they see me there."

If Cardin wanted to empower women in agriculture, Barjon suggested that he help repeal the Bumper's Amendment, a law prevents U.S. government aid from being spent on programs that could benefit crops that might compete with American exports on the global market.