The old trope that Midwesterners are the friendliest people might actually be rooted in truth, according to a new study in the Journal of Personality and Social Psychology.

Researchers from the University of Cambridge analyzed personality traits through the use of Facebook, surveys and other methods of nearly 1.6 million people living in the United States and Washington, D.C. (excluding Hawaii and Alaska). They looked particularly at five personality dimensions -- neuroticism, agreeableness, openness, conscientiousness and extraversion -- over 12 years to see how they mapped out in the U.S. 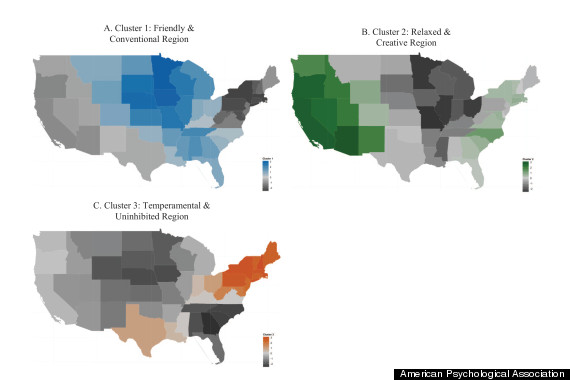 "This analysis challenges the standard methods of dividing up the country on the basis of economic factors, voting patterns, cultural stereotypes or geography that appear to have become ingrained in the way people think about the United States," study researcher Peter J. Rentfrow, Ph.D., of the University of Cambridge, said in a statement. "At the same time, it reinforces some of the traditional beliefs that some areas of the country are friendlier than others, while some are more creative."

For the friendly and conventional regions, researchers noted that "the characteristics of this psychological region suggest a place where traditional values, family, and the status quo are important," they wrote. "What are the mechanisms that might contribute to the emergence of this psychological region? One likely mechanism is selective migration, or the notion that individuals selectively move to places that satisfy their needs."

Researchers also noted that the western U.S. may be home to so many relaxed and creative people because of persisting attitudes related to frontier settlement from long ago. In addition, they wrote, "this region is undergoing more residential mobility than other parts of the nation because young people, professionals, and immigrants are choosing to move here to pursue educational and employment opportunities. Such challenging and exciting opportunities are likely to attract individuals who have creative psychological profiles, which then become expressed in terms of human capital, wealth, and economic innovation."

Meanwhile, temperamental and uninhibited people might be more likely to reside in the Mid-Atlantic and Northeast regions because this region has the deepest-rooted settlement history in all of the United States. "It is conceivable that over time, the normals and institutions established here have shaped the behavior and psychological characteristics of residents," the researchers wrote. "This idea is consistent with much theorizing in cultural psychology, which argues that norms and institutions have top-down effects on personality development by influencing what people are socialized to believe is right and wrong, and by shaping life experiences and opportunities."