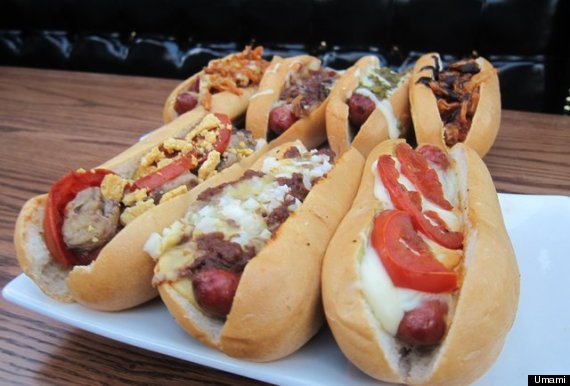 Sometimes, as Freud certainly didn't say, a hot dog is just a hot dog. It's also the most American-est damned food out there, and like all great American things, it changes depending on the region you're in. Sometimes it's covered in beef heart. Sometimes it's wrapped in bacon and outlawed. These are America's greatest regional variations on the dog, and as good an excuse as any to hit the road and sample a little Americana.

New York System Wieners (Rhode Island)
Typically made w/ pork & veal as opposed to the typical pork & whatever else franks, these snappy Rhode Island wonders come smothered in a thick meat sauce, onions, mustard & celery salt. Initially, they were so named to become more associated with NY's hot dogs, but have since taken on a life of their own... a life that still has outsiders confused as to why they're not called Rhode Island System Weiners.
Where to score one: Olneyville New York System in Providence.

The Sonoran Dog (Arizona)
Taking a cue (aka basically ganking an idea) from neighboring Sonora, Mexico, the sun-soaked folks in AZ have contributed a hot dog to the world that is perhaps its most decadent. This starts with a bacon-wrapped hot dog jammed into a roll, then loaded like a burrito: beans, onions, jalapenos, salsa -- you name it. Then it's topped with sour cream. It's the most delicious thing you'll ever wear.
Where to score one: El Guero Canelo in Tuscon 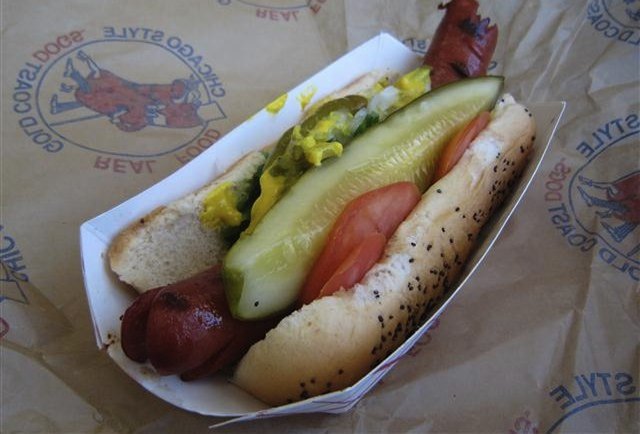 Chicago Dog (Chicago, duh)
Chicago's residents take fewer things more seriously than da Bears and dispelling da rumors that they talk like antiquated SNL characters. But they take nothing more seriously than their dogs, typically made with Vienna beef sausages slapped on a poppy seed bun w/ tomatoes, pickles, and neon green relish that's no (da) bull(s).
Where to score one: Hot Doug's

The Coney (Detroit & Flint, Mich.)
Seemingly the only law that Flint and Detroit abide by is the one stating that hot dogs need to be made of real cuts of meat, not just random bits. That results in a superior hot dog and two variations on the Coney. Both go for mustard and onions, but it's the sauce that mixes it up. Detroit-style goes for a more smooth chili-approach, while in Flinttown, the sauce is a drier, meatier topping consisting of chopped beef heart and, in an act of wonder, ground hot dogs.
Where to score one: In Flint, Angelo's. In Detroit, Lafayette or American.

The Street Dog/Dirty Dog (New York)
You can't walk three feet in NYC without bumping into a tourist, but you also can't walk one foot without hitting a hot dog stand, which sells $1-$2 wares of questionable quality and unquestionable deliciousness that are basically a food group unto themselves. Get 'em even dirtier with weirdly orange sauteed onions, or just squirt them with mustard and try to eat it before some sweaty tourist bumps into you.
Where to score one: RIGHT IN FRONT OF YOU!

Six more regional dog delights, from bacon-wrapped street dogs to Italian franks, are all in the full story on Thrillist.com!