The debunking of Carmen Reinhart and Kenneth Rogoff continues.

The Harvard economists have argued that mistakes and omissions in their influential research on debt and economic growth don't change their ultimate austerity-justifying conclusion: That too much debt hurts growth.

But even this claim has now been disproved by two new studies, which suggest the opposite might in fact be true: Slow growth leads to higher debt, not the other way around.

And a new paper by University of Massachusetts professor Arindrajit Dube finds evidence that Reinhart and Rogoff had the relationship between growth and debt backwards: Slow growth appears to cause higher debt, if anything.

As you can see from the chart from Dube's paper below, growth tends to be slower in the five years before countries have high debt levels. In the five years after they have high debt levels, there is no noticeable difference in growth at all, certainly not at the 90 percent debt-to-GDP level that Reinhart and Rogoff's 2010 paper made infamous. Kimball and Wang present similar findings in their Quartz piece. (Story continues below chart.) 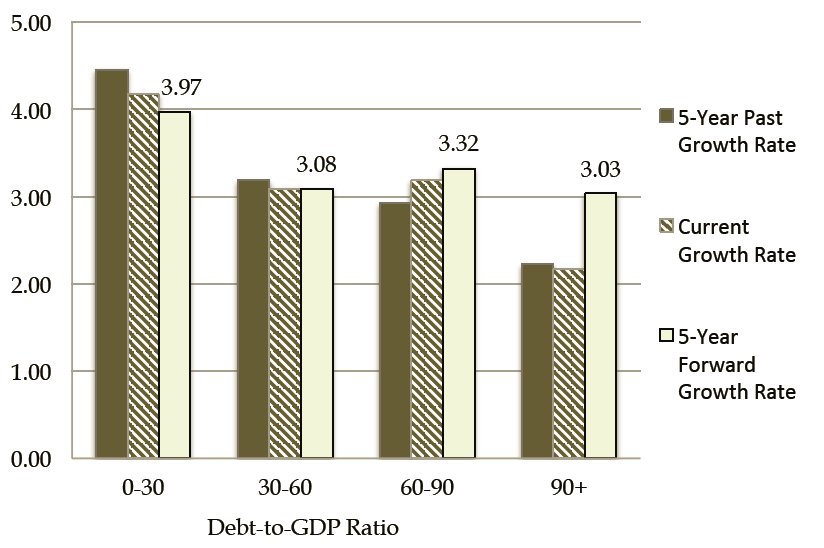 This contradicts the conclusion of Reinhart and Rogoff's 2010 paper, "Growth in a Time of Debt," which has been used to justify austerity programs around the world. In that paper, and in many other papers, op-ed pieces and congressional testimony over the years, Reinhart And Rogoff have warned that high debt slows down growth, making it a huge problem to be dealt with immediately. The human costs of this error have been enormous.

Even after University of Massachusetts graduate student Thomas Herndon found Reinhart and Rogoff's work included errors and that their 2010 paper was missing important data, the researchers stood by their ultimate conclusion: that growth dropped off significantly after debt hit 90 percent of GDP. They claimed that austerity opponents like Paul Krugman have been so so rude to them for no good reason.

At the same time, they have tried to distance themselves a bit from the chicken-and-egg problem of whether debt causes slow growth, or vice-versa. "The frontier question for research is the issue of causality," they said in their lengthy New York Times piece responding to Herndon.

It looks like they should have thought a little harder about that frontier question three years ago.