You can hardly blame Carmen Reinhart and Kenneth Rogoff for wishing 2013 never happened, but this is ridiculous.

The Harvard economists, who spent most of last year defending themselves after a grad student discovered huge errors in their seminal pro-austerity research, made yet another error in their latest research report (link automatically downloads PDF): Writing "2014" when they should have written "2013." (Hat tip: Kevin Roose)

In fact, the error is in the very first sentence of the report:

This is hardly a major error, of course: Many of us will probably still be writing "2013" on our checks well past Groundhog Day. It's certainly nothing like the errors that peppered Reinhart and Rogoff's 2010 paper, "Growth In A Time Of Debt," which was used to justify painful austerity measures in the U.S., Europe and U.K. Those mistakes led to crushing economic misery. This one just led to some chuckles on Twitter.

In fact, I'd say the bigger error Reinhart and Rogoff made in connection with this new paper -- which studies the speed of recoveries around the world from the financial crisis -- was letting the New York Times run this very weird photo with its story about their research. 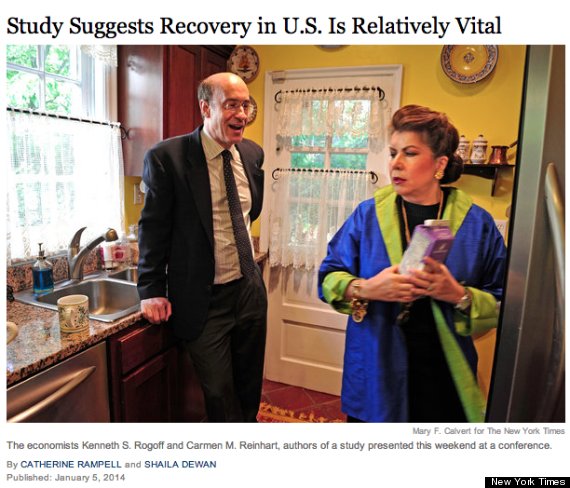 Still, given the nightmare of their 2013, you'd think Reinhart and Rogoff would want to be extra careful in 2014.