When you search online for the term "sustainability," one of the first results is the Environmental Protection Agency. Another result highlights the well-known three Rs - reduce, reuse and recycle. When you do the same search in images, the results are overwhelmingly green. City skylines, windmills and trees all shaded in green. While society seems to have focused on saving trees and avoiding climate change when discussing sustainability, the history of the word is much more colorful.

The idea of sustainability was originally conceived with strong economic and social dimensions. Yet, in the evolution of how we have come to view "sustainable," these two facets seem to have fallen aside. When the word first appeared in the English language in 1610, "sustainable" meant "bearable." This evolved to "defensible" in the 19th century and now, we commonly understand it as "capable of being continued."

Then, in the 1987 book, Our Common Future, Gro Harlem Brundtland, then Prime Minister of Norway and Chair of the United Nations World Commission on Environment and Development proposed the following, "Sustainable development is...development that meets the needs of the present, without compromising the ability of future generations to meet their own needs." Brundtland's definition is open, comprehensive and focused on people and economic development. So how did we get so entrenched in the monochromatic view of sustainability as "green"?

Here's a theory: In 1988, just after Our Common Future was released, John Elkington and Julia Hailes published The Green Consumer Guide. It quickly became an international best seller and inspired a new consumer movement focused on green products. Elkington and Hailes went on to found a consultancy, SustainAbility, and Elkington continued to write. In his 1997 book, Cannibals with Forks, he pioneered the idea that companies should focus on more than the single bottom line of profit, but also on two additional bottom lines: people and planet. 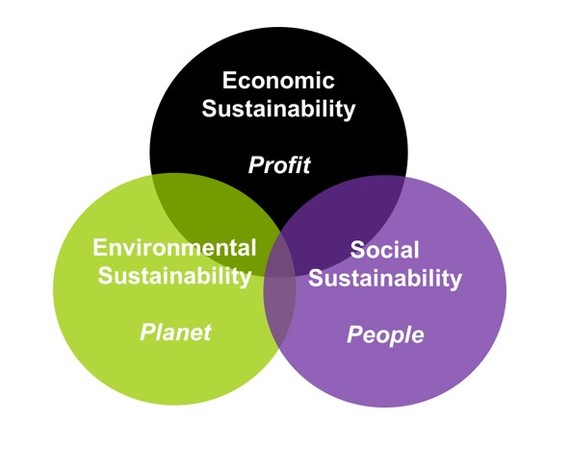 Perhaps it was too late. The overwhelming popularity of The Green Consumer Guide, which had by then been published in multiple languages across the world, had established the predominance of green as the path to sustainability. Many companies continued to focus their sustainability efforts on reducing, reusing and recycling, and serving their environmentally-focused consumer demand.

Ironically then, it could well have been the success of The Green Consumer Guide and the movement it launched that limited the definition of sustainability to just one of its dimensions. As a society, we narrowed the trifecta of people, profit, and planet into planet alone. We perpetuate the trend when we use the term 'sustainable' to refer solely to environmental themes. This still happens regularly today.

So as we get closer to 2017, the 30 year anniversary of the Brundtland definition, let's return the multi-colored roots of the term. By doing so we'll not just aim to go green, but find more ideas that deliver a win for the economy, society and the planet, at the same time. Let's find that intersect in more aspects of our personal and professional lives.