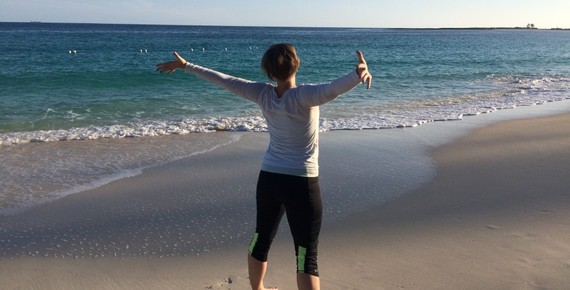 It took me just about nine years to be able to speak publicly about this... but today I broke the silence with Steve Olsher, host of Reinvention Radio, in an exclusive interview. We talked about Reinventing Personal Identity.

About nine years ago, I woke up one day, literally, over $40,000 dollars in debt. I was blindsided, I was devastated, I was confused, and most of all, I was hurt. My ex-husband owed lots of money to lots of bookies, and they wanted what was due to them. Gambling on sports teams finally had caught up with my ex, and well, to be honest, I didn't know any of this was happening.

I called my older sister, Julie, for help. I had $5 in my wallet and had no way to get groceries. My biggest fear, outside of losing my house, was how I was going to get food and have my basic needs met.

She, of course, helped financially, but most of all, she helped me emotionally. She let me cry on her shoulder daily, she helped me to see the whole picture, she tried to help me figure out how much we owed to which people -- the bills hadn't been mailed, and we were in big trouble. But do you know the greatest things my sister did for me? She never, ever said a word to anyone about my situation. She kept my deep secrets safe from the world, so I didn't have to deal with more shame and hurt and judgment from others.

I tried to do the right thing. I stuck by his side. We went to counseling. We went to Gam-Anon. But, the next year, after working our asses off to pay off that initial debt, I woke up to another $20,000 in debt -- same issue. This time, I knew that I had to make some tough changes.

Did I love him? Yes, we were best friends. But... I loved myself and my future more.

So, we parted ways and I began the soul-work of rebuilding myself up after being so broken. After being so betrayed. I was lonely. I was hurt. I was getting divorced, and I had to sell the house we worked so hard to build from the ground up. The worst, most isolated feeling of all was that I had to move out on my own again, and start over.

It took time to get there... but I never gave up hope. I didn't let my past define me. I didn't look back, but learned to set new goals and take care of myself first, before anyone else.

Reinventing your life, and having the courage to do so, can (and should) happen at any time when you feel something "isn't quite right." This is a topic I am very passionate about. I want to reach people who are "stuck" and are scared to make changes, or not sure which way to go, or who to turn to.

Why? First, I've been there so many times myself. And secondly, I promise you that if you embrace the hard circumstance and learn from the hard lessons that life tries to teach you, you only come out stronger on the other side.

The interview is raw, real, and now live. I hope that you will take a listen. My ultimate hope is that you will find the courage to reinvent the parts of your life that aren't working, aren't serving you or those you love, and aren't making you happy.

More:
Marriage Problemsdivorcecoping with divorceDebtLife After Divorce
Newsletter Sign Up
An essential daily guide to achieving the good life
Subscribe to our lifestyle email.
Successfully Subscribed!
Realness delivered to your inbox